The US Supreme Court is set to issue the final rulings of its current term including on Trump's emergency request to revive his travel ban. 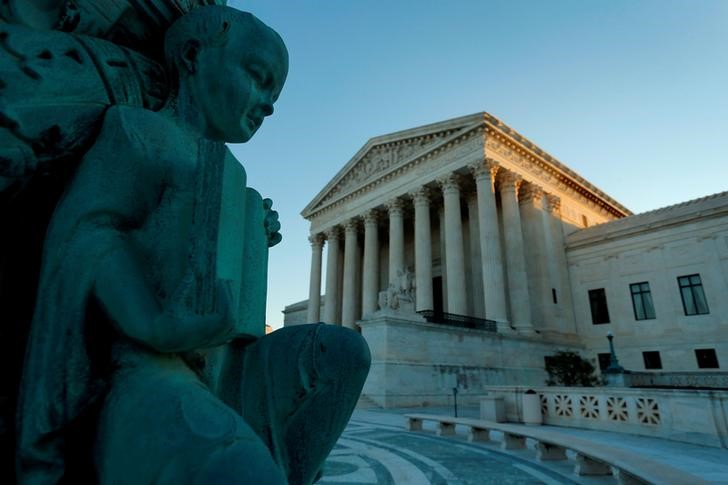 A figure of a child holding an open book decorates a flagpole at the U.S. Supreme Court building in Washington, U.S. on October 5, 2014. Credit: Reuters/Jonathan Ernst/Files

Washington: The US Supreme Court is set to issue the final rulings of its current term on Monday, including one on religious rights, amid talk that swing voter Justice Anthony Kennedy is considering retirement.

The court in the coming days is also expected to act on President Donald Trump’s emergency request seeking to revive his travel ban on people entering the US from six Muslim-majority countries, which was blocked by lower courts.

Although there are no firm indications that Kennedy will step down, some of his former law clerks have said he is considering it. Any announcement could come after the court has finished issuing its rulings on Monday morning.

Kennedy has repeatedly declined to respond to media requests seeking comment on his plans. He joined his former law clerks at a reunion event on Saturday night, with several attendees saying he did not address the rumors.

If Kennedy were to retire, President Donald Trump, a Republican, would have a historic opportunity to recast the court in a more conservative posture, possibly for decades to come. He has already appointed one conservative justice, Neil Gorsuch. But Gorsuch replaced a conservative in a similar mold, Justice Antonin Scalia, who died last year. Replacing Kennedy, the swing vote for the last decade on the closely divided court, would be more significant. Kennedy has sided with the court’s four liberals on some major issues, most notably gay rights.

Speaking on ABC’s “This Week” program on Sunday, Kellyanne Conway, a Trump adviser, declined to say if there has been any communication between the White House and Kennedy. 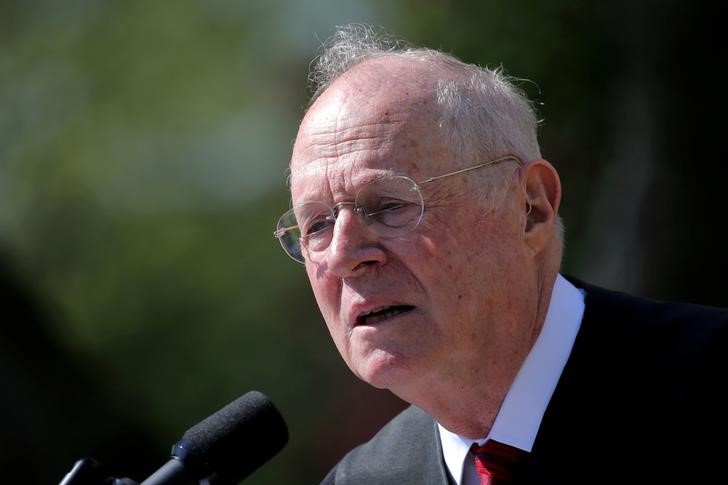 Supreme Court Associate Justice Anthony Kennedy speaks during a swearing in ceremony for Judge Neil Gorsuch as an associate justice of the Supreme Court in the Rose Garden of the White House in Washington, US, April 10, 2017. Credit: Reuters/Carlos Barria

The nine justices are due to rule in six cases, not including their decision expected in the coming days on the travel ban.

Of the remaining cases argued during the court’s current term, which began in October, the most eagerly awaited one concerns a Missouri church backed by a conservative Christian legal group. The ruling potentially could narrow the separation of church and state.

The church sued after being denied state taxpayer funds for a playground improvement project because of a Missouri constitutional provision barring state funding for religious entities.

Trinity Lutheran could be headed for a lopsided win, with two liberal justices joining their conservative colleagues in signaling support during the April oral argument. It was one of the first in which Trump’s conservative appointee to the court, Neil Gorsuch, participated.

The most notable of three immigration-related cases in which rulings are due on Monday is a dispute over whether immigrants detained by the US government for more than six months while deportation proceedings unfold should be able to request their release. The case takes on additional significance with Trump ratcheting up immigration enforcement, placing more people in detention awaiting deportation.

The court also is set to decide a case that could clarify the criminal acts for which legal immigrants may be deported. Another involves whether the family of a Mexican teenager shot dead while standing on Mexican soil by a US Border Patrol agent in Texas can sue for civil rights violations.

As the justices look to finish work before their summer break, they must decide what to do with Trump’s travel ban, which was blocked by lower courts. The administration wants the ban to go into effect while the litigation continues.

The March 6 executive order called for a 90-day ban on travellers from Libya, Iran, Somalia, Sudan, Syria and Yemen and a 120-day ban on all refugees entering the United States to let the government implement stronger vetting. Trump has said the order is needed for national security.