With a lavish welcome, Saudis convince Trump that Iran – not their own fundamentalism – is a bigger danger for the Middle East 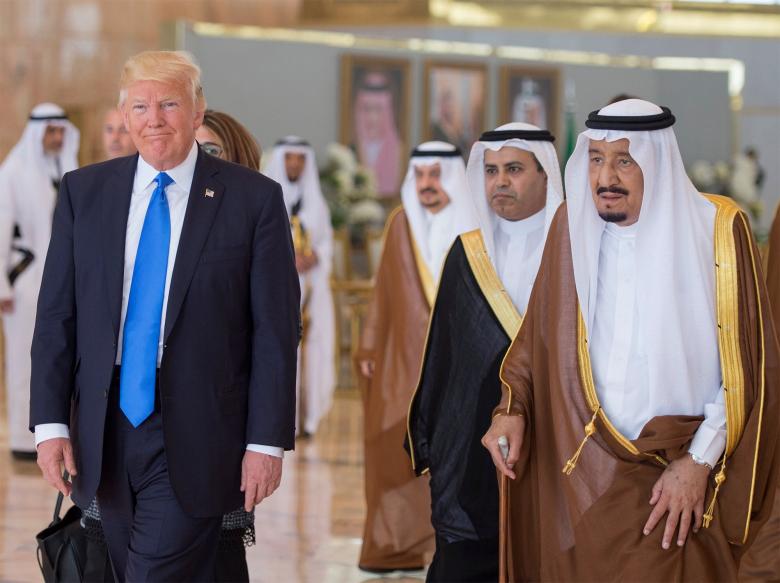 London: Saudi officials repeatedly described US President Donald Trump’s visit to Riyadh as “historic,” calling his meeting with rulers of the six-member Gulf Cooperation Council (GC), a “landmark event.” American counterparts, however, opted for the word “reset,” suggesting that the two nations are resetting ties after a strained relationship with the Obama administration.

For Saudi royals, this reset is relief from Barack Obama’s repeated urging to ease their repressive policies on human rights. They agree with Trump’s declaration that emphasising human rights impeded trade between the countries. They also approve of his admiration for strongmen like Egypt’s President Abdul Fattah Sisi, Russia’s Vladimir Putin and Turkeys’ Recep Tayyip Erdoğan. In contrast, they conveniently overlook the fact that Obama and his Republican predecessor George W. Bush advocated human rights and democracy as tactics to undermine support for radical Islamism.

Trump’s foreign jaunt made it clear that he is aligning with the agenda of the Sunni monarchs of the GCC regarding Iran. They have framed their rivalry with the Islamic Republic of Iran in sectarian terms, demonising Shia Islam in the process. While skirting the theological battle, Trump describes Iran as a state that supports terrorism, which has not totally abandoned aspirations to build a nuclear weapon.

Eager to be seen as succeeding with his foreign policy, Trump unilaterally reset his opinions of Saudi Arabia by 180 degrees. A year ago, addressing a campaign rally in Wisconsin, he said, “Nobody’s going to mess with Saudi Arabia because we’re watching them [the Saudis]… they’re not paying us a fair price. We’re losing our shirt.” As late as April 28, in a Reuters interview, he complained; “Frankly, Saudi Arabia has not treated us fairly, because we are losing a tremendous amount of money in defending Saudi Arabia.” Three weeks later, in Riyadh, he uttered not a word about the US financial burden of protecting the kingdom – totaling $10,000 in miltary education and training in 2014.

Instead, Trump focused on signing a US-Saudi military cooperation agreement worth $350 billion over 10 years, with $110 billion to take effect immediately.

The last thing that the Middle East needs is massive imports of what, in Trump’s words, are “lots of beautiful military equipment which nobody makes it like the United States.” This led US senator Chris Murphy to remark, “In the powder keg that is the Middle East, this sale may simply light a fuse that sends the region, and us, deeper down the rabbit hole of perpetual military conflict.”

Obama had already been generous in supplying weapons to Riyadh. According to the Washington-based Center for International Policy, in 42 separate deals his administration offered the Saudi Kingdom a record $115 billion package for arms, other military equipment and training.

On the eve of the landmark Joint Comprehensive Plan of Action (JCPOA) – meticulously negotiated by the US and signed in July 2015 by six world powers and Iran on its nuclear program – Obama went out of his way to bolster the security of Saudi Arabia and five other Gulf monarchies. He hosted a US-GCC summit at the White House and Camp David in mid-May. He promised US technical assistance in creating a ballistic missile early-warning system for GCC states to defend themselves against Iran’s missile attacks. Two months earlier, he had agreed to provide logistical and intelligence support to the Saudis when they intervened in the Yemen civil war to defeat Shia Houthi insurgents. .

In April 2016 Obama flew to Riyadh, his fourth such visit, the highest by any American president, to hold the second US-GCC summit. Thus, Trump’s recent meeting with GCC leaders in Riyadh ranked third in the series.

The JCPOA signing resulted in lifting UN sanctions on Iran. But Washington’s sanctions on Iran, emanating from US law, remained in place. “Iran’s ballistic missile program and its support for terrorism pose a continuing threat to the region, to the US, and to our partners worldwide,” said US treasury official Adam Szubin in March 2016, adding that America would continue to counteract these threats through sanctions. US financial institutions continue to be barred from dealing with Iran.

Trump and his team arrived in Riyadh on May 20, the day after the reformist incumbent, Iranian President Hassan Rouhani, was reelected after a decisive win, 57% to 39%, over conservative rival Ebrahim Raisi. Four rounds of television debate by the contestants had preceded the polling.

Commenting on the result, US secretary of state Rex Tillerson said that the Trump administration hoped Tehran “restores the rights of Iranians to freedom of speech, to freedom of organisation, so that Iranians can live the life that they deserve.” He seemed to have missed the clarion call given by Rouhani at the largest election rally in Tehran: “We want freedom of press, freedom of association, and freedom of thought.” Nor did Tillerson notice the stark irony of his government’s total silence on the wholesale denial of these rights for the subjects of Saudi King Salman. 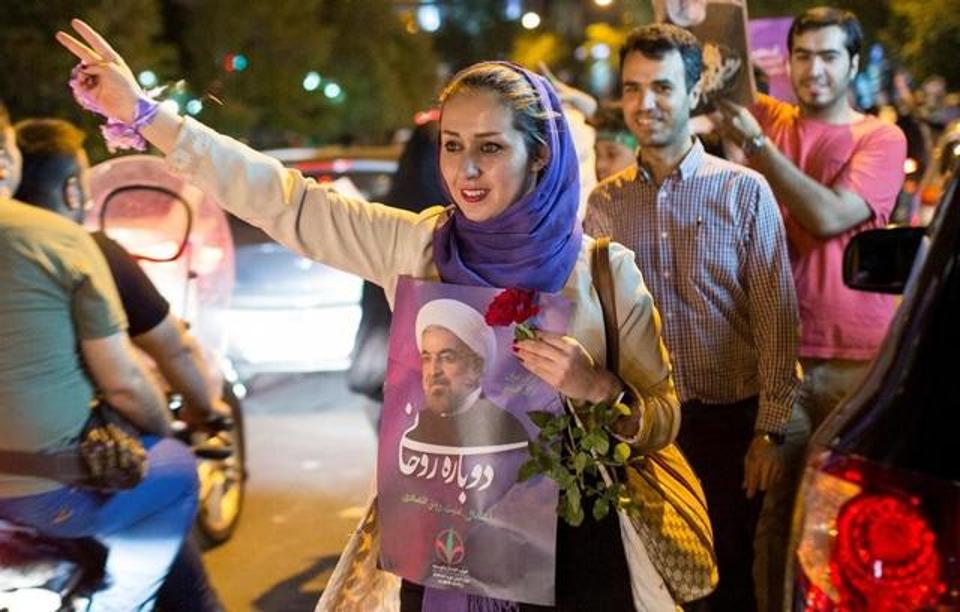 Men and women together celebrate the re-election of Iranian President Hassan Rouhani during a campaign rally in Tehran on May 17, 2017. Credit: Reuters

Pursuing a predetermined agenda, Trump told the gathering of 35 heads of state from across the Muslim world, “From Lebanon to Iraq to Yemen, Iran funds, arms and trains terrorists, militias and other extremist groups that spread destruction and chaos across the region.”

Hezbollah in Lebanon, allied with Iran, has a political wing, a key part of the republic’s parliamentary system, and two ministers in the present cabinet. And long before the Obama administration geared up to help the government in Baghdad fight the Islamic State in Iraq, Iran had trained, funded and armed Iraqi Shia to battle the extremists.

The Zaidi Shias tribes inhabiting the mountainous north in Yemen got their chance to seize the capital of Sanaa in the chaos following the Arab Spring uprising in 2011. Led by Abdul Malik al Houthi, they became known as Houthis. This insurgent movement emerged independently of Iran, which has since then tried to supply it arms with intermittent success.

When the impulsive 29-year-old Saudi defense minister, Prince Mohammad – the favorite son of King Salman, since named deputy crown prince – decided in March 2015 to launch an air blitzkrieg in Yemen, he declared that Houthis could be uprooted “in a matter of days.” But the war, costing Riyadh tens of millions of dollars a day, has turned into a stalemate. .

Prince Mohammad claims that the Houthis are puppets of Iran. On May 1, he was asked on the Dubai-based, Saudi-owned Al Arabiya television channel if he saw a possibility for direct talks with Iran. In his reply, he referred to a Shia belief of waiting for the arrival of the 12th Hidden Imam, who disappeared around 868 AD, as al Mahdi, or the Messiah, to bring justice to the world: “How can I come to an understanding with someone, or a regime, that has an anchoring belief built on an extremist ideology?” he asked rhetorically. He then asserted that Iran aimed to “control the Islamic world.”

Among Muslims worldwide, Shias are a minority of 15%. Only four of the 57 Muslim-majority countries are Shia. To declare that Iran aimed to control the Islamic world, 85% Sunni, is beyond belief.

Trump, notorious for a short attention span and impulsiveness, has aligned his administration with this preposterous scenario.

Dilip Hiro is the author of A Comprehensive Dictionary of the Middle East (Interlink Publishing Group, Northampton, MA). His latest and 36th book is The Age of Aspiration: Power, Wealth, and Conflict in Globalizing India (The New Press, New York).

This article originally appeared on YaleGlobal. Read the original here.