As is evident from the recent events, Saudi Arabia has not lived up to the labour cooperation agreement signed with India in April this year. 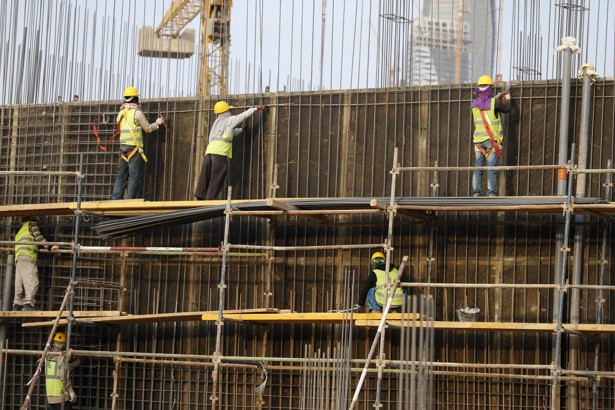 Indian labourers work at the construction site of a building in Riyadh. Credit: Reuters/Faisal Al Nasser

In April this year, Prime Minister Narendra Modi visited Saudi Arabia on a state visit. The two sides signed five agreements, including a labour cooperation agreement that ensures a standard work contract and better working conditions for Indian workers in unskilled, semi-skilled and skilled jobs in Saudi Arabia. During his visit, Modi was also conferred with the kingdom’s highest civilian honour, the Order of King Abdulaziz.

However, barely three months after this agreement was signed, things have taken a U-turn. Reports of the deplorable conditions Indian workers are made to work under in the kingdom have started to surface. The issue came to light when a man tweeted to India’s foreign minister Sushma Swaraj saying that around 800 Indians in Jeddah had not eaten for three days and asked her to intervene.

Saudi Oger, a leading construction company, did not pay wages to its employees for seven months. Of the 50,000 people who work there, 4,000 are Indians.

As the news spread, the Indian government took action. Around 16,000 kg of food was distributed by the consulate to the close to 10,000 starving Indian citizens in Saudi Arabia. Most of these were workers who had lost their jobs and not been paid their dues.

According to the foreign ministry, a crisis management group has been set up by the labour ministry to settle all issues related to Indian workers, along with making the necessary arrangements for those who wish to return to India.

Reports from the Indian consulate in Riyadh have said that the Saudi government will soon be appointing a lawyer and necessary procedures will be taken to help the workers get their pending dues.

Indians are the largest community of expatriates in Saudi Arabia, numbering around 3 million. The number of Indians working in different fields in Saudi – both white and blue collar workers – rose from 34,500 in 1975 to 1.2 million in 1999 and 2.96 million in 2016.

India and Saudi Arabia signed an agreement to manage and organise the recruitment of domestic workers in January 2014. Between then and April 2016, 500,000 Indians moved to Saudi Arabia for employment. The agreement includes a provision which stipulates that sponsors must pay a guarantee of Rs 1.6 lakh for each Indian worker they recruit. They are recruited to work in cafeterias, supermarkets, construction sites and guest houses; they sweep streets, cook in restaurants and serve in households as domestic workers. According to a World Bank report, Indian migrants to Saudi Arabia send close to Rs 500 billion back to India every year. Remittances to Kerala account for nearly a third of the state’s net domestic product.

According to a 2014 report by Amnesty International, close to 1,000 Indian low-wage migrant workers are provided emigration clearances to travel to Saudi Arabia everyday. However, Indian migrant workers can often face serious exploitation and deception during the migration process, leading to serious human rights abuses in Saudi Arabia, which, at worst, includes forced labour. Saudi Arabia requires foreign workers to have their sponsor’s permission to enter and leave the country, and denies exit to those with work disputes pending in court under the kafala system. This is a violation of the Universal Declaration of Human Rights adopted by the UN, which declares, “Everyone has the right to leave a country, including his own”. An International Labour Organisation committee of experts has said that the kafala system is conducive to the exaction of forced labour.

The report states that migrant labourers worked for several hours more than the eight hour maximum prescribed under Saudi law. Some workers said they used to work between 15 to 18 hours a day, which severely affected their health, but were not paid or were underpaid for their overtime work. Sometimes they were even made to work on all seven days of the week without any rest.

Employers also confiscated the passports of Indian labourers as a tool to control migrant workers and prevent them from running away.

Saudi Arabia introduced the Nitaqat law in March 2013, under which it clamped down on companies and organisations that employed migrant workers without valid documents. They also conducted drives across the kingdom to apprehend workers who lacked the legal documents to work and live in the country. According to an Indian government estimate, around 1.41 lakh Indians left Saudi Arabia between April 6 and November 3, 2013, following the enforcement of the Nitaqat law. The law also gave an opportunity to Indian migrants to regularise their work and amend their legal status in the kingdom. However, the law did not include the tracking down of illegal recruiting agencies and human resource agents.

Despite the Nitaqat law, the current situation of Indians in Saudi Arabia is a worrying.

Modi’s visit to Saudi Arabia was like all his foreign trips, where he met the Indians living there. He visited the Indian workers of Larsen and Toubro in Riyadh and greeted them by saying, “It is the smell of your sweat that has brought me here.”

All said and done, human rights abuses against Indian migrants in Saudi Arabia is nothing new. And their situation remains abysmal. However, never has there been a scenario where Indian workers have been deprived of their basic needs and kept in camps for days. Given that this has happened despite Modi’s recent visit to the kingdom, the chinks have clearly been exposed in Modi’s policy on the welfare of Indians living overseas.

Uzair Hasan Rizvi is an independent multimedia journalist based in Lucknow. He tweets at @rizviuzair