Literally every woman, except the very old and young, has had experiences of either being molested or experiencing an extreme level of abuse like gangrape. 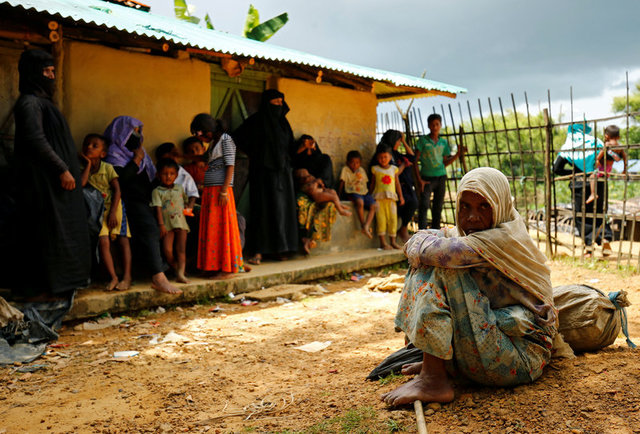 Cox’s Bazar, Bangladesh: Yasmin, 26, holds her ten-day-old baby, who she gave birth to in a crowded refugee camp in Cox’s Bazar, a southeastern district bordering Myanmar.

Three weeks ago, when she was still in her home in Hpaung Taw Pyin village in Myanmar, she was raped by a group of soldiers as houses burned, people fled and gunfire shattered the air.

“I have been working as a human rights activist for the last 20 years but never heard of such an extreme level of violence”, said Bimol Chandra Dey Sarker, chief executive of the aid organisation Mukti.

With sunken eyes, Yasmin told IPS how she was beaten and raped in her ninth month of pregnancy by Myanmar soldiers. Yasmin’s village was almost empty when she and many of her neighbours were violated. Only a few dozen women and children remained after the men had fled in fear of being tortured or killed.

“On that dreadful evening an army truck stopped in our neighbourhood, and then came the soldiers raiding homes. I was alone in my home and one of the soldiers entering my thatched house shouted to invite a few others to join him in raping me.”

“I dare not resist. They had guns pointed at me while they stripped me to take turns one by one. I don’t remember how many of them raped me but at one stage I had lost consciousness from my fading screams,” she said, visibly exhausted and traumatised by the horrific ordeal.

Yasmin’s husband was killed by the Myanmar army on September 4 during one of the frequent raids, allegedly by state-sponsored Buddhist mobs against the Muslim minority in their ancestral home in Rakhine state.

Bandarban, a hilly district, and Cox’s Bazaar, a coastal district, both some 350 km southeast of Bangladesh’s capital Dhaka, are hosting the overcrowded Rohingya camps. The locals here are no strangers to influxes of refugees. Rohingyas have been forced out of Myanmar since 1992, and Bangladesh, as a neighbour, has sheltered many of them on humanitarian grounds.

However, the latest Rohingya exodus, following a massive government crackdown that began last August, has shaken the world. The magnitude of the atrocities carried out by the military junta this time is beyond imagination. Some describe the persecution as ‘genocide,’ which Myanmar’s rulers deny.

To add to the communal violence, dubbed ‘ethnic cleansing’ by Zeid Ra’ad Al Hussein, the UN high commissioner for human rights, the military junta intensified physical assaults and soldiers have been sexually harassing innocent, unarmed Rohingya women alongside the regular killings of men.

The reasoning is obvious: no one should dare to stay in their homes. Many believe it’s a pre-planned operation to clear Rakhine state of the Rohingya population, who Myanmar does not recognise as citizens.

One Rohingya man, who managed to reach the Bangladesh border in mid-September, told IPS, “They have indeed successfully forced the Rohingya men out while the remaining unprotected women were a headache for the military junta, as killing the unarmed women would expose them to international criticism. So they chose a strategy of frightening the women and children – apply physical assault and sexual abuse, which worked so well.”

IPS spoke with many of the agencies, including the UN and local NGOs, working on the ground to provide emergency services such as food distribution, erecting shelters, organising a safe water supply and hygienic latrines and, of course, healthcare.

Everyone who spoke to this correspondent said literally every woman, except the very old and young, has had experiences of either being molested or experiencing an extreme level of abuse like gang rape.

Survivors and witnesses shared brutal stories of women and young girls being raped in front of their family members. They described how cruel the soldiers were. They said the soldiers showed no mercy, not even for the innocent children who watched the killings and burning of their homes.

Bimol Chandra Dey Sarker, Chief Executive of Mukti, a local NGO in Cox’s Bazaar, told IPS, “I have been working as a human rights activist for the last 20 years but never heard of such an extreme level of violence. Many of the women who are now sheltered in camps shared their agonising tales of sexual abuse. It’s like in a movie.”

Kaniz Fatema, a focal person for CODEC, a leading NGO in coastal Cox’s Bazaar, told IPS, “Stories of sexual abuse of Rohingya women keep pouring in. I heard women describing horrific incidents which they say are everyday nightmares. How can such violence occur in this civilized world today?”

“Although women are shy and traumatised, they speak up. Here (in Bangladesh) they feel safer and so the stories of abuses are being submitted from every corner of the camps,” she said.

The chief health officer of Cox’s Bazar 500-bed district hospital, where most of the wounded are being treated, told IPS, “At the beginning we were providing emergency treatment for many Rohingya refugees with bullet wounds. Now, we are facing a new crisis of treating so many pregnant women. We are registering pregnant women and admitting them almost every day despite shortages of beds. Many of these women complain of being sexually harassed.”

An attending nurse at the hospital who regularly treats the sexually abused women, said, “Many women still bear marks of wounds during rape encounters. It’s amazing that these women are so tough. Even after so many days of suffering, they keep silent about the agonies and don’t complain.”

The UNFPA is offering emergency reproductive healthcare services in Bandarban and Cox’s Bazaar, where aid workers shared similar tales from women who suffered torture and gang rape at gunpoint.

“It is so horrifying,” said a field worker serving in Ukhia upazila in Bandarban, adding, “I heard of a young girl being raped in front of her father, mother and brother. Then the soldiers took the men out in the courtyard and shot them.”

Faisal Mahmud, a senior reporter who recently returned to the capital from Rohingya camps, also said he spoke to many victims of rape. “Most of them I spoke to were so traumatised they were hardly able to narrate the brutality. I could see the fear in their faces. Although I hardly understand their dialect, a translator helped me to understand the terrifying tales of being stripped naked and gang raped.”

Mohammad Jamil Hossain trekked through the deep forests, evading mines and Myanmar border guards who look for men to catch and take back.

“The systematic cleansing will not end until every member of Rohingya population is evicted and forced out of the country,” he said. “The whole world is watching and yet doing nothing to stop the killings. Here we have a female ‘Hitler’ who enjoys world support for what she says is an ‘internal problem’,” he added, referring to Myanmar’s de facto leader, Aung San Suu Kyi, who has failed to challenge the military over its atrocities against the Rohingya.

Shireen Huq, founder member of Naripokkho, Bangladesh’s leading NGO fighting for women’s rights, told IPS, “I was shocked and overwhelmed by the sheer numbers of people, mostly women and children, fleeing Myanmar and entering Bangladesh. The media had reported widespread atrocities, mass rape, murder, arson and brutality in the state of Rakhine.”

“Women arriving at Nayapara through Shah Porir Dwip were in a state of shock and fatigue. Many of them were candid about the julum (a word used to mean both torture and rape) they had undergone, about being raped by several military,” she said.

“We must ensure appropriate and adequate care for the refugees, especially all those who have suffered sexual violence. They need medical care, psycho-social counseling and abortion services.”

“Agencies working in the Rohingya refugee camps estimate that 50,000 women are pregnant. Several hundred deliveries have already taken place. Round the clock emergency health services must be made available to deal with the situation,” Shireen said.

More than 501,800 Rohingya have fled the Buddhist-majority country and crossed into Bangladesh since August 25. Densely populated refugee settlements have mushroomed around road from Teknaf to Cox’s Bazar district that borders Myanmar divided by Naf river. About 2,000 of the refugees are flooding into the camps every day, according to the International Organisation for Migration (IOM).

IOM has appealed to the international community for 120 million dollars between now and February 2018 to begin to address the humanitarian crisis.

“The refugees who fled Rakhine did so in the belief that they would find safety and protection in Cox’s Bazar,” said William Lacy Swing, IOM’s Director General, in a statement on October 4. “It is our responsibility to ensure that the suffering and trauma that they have experienced on the way must end.”

Meanwhile, witnesses say there are still thousands of refugees in the forest waiting to cross over the Bangladesh border, which has now been officially opened. Many can be seen from distant hilltops, walking with whatever belongings they could take.

“I was really struck by the fear that these people carry with themselves, what they have gone through and seen back in Myanmar,” the UN High Commissioner for Refugees, Filippo Grandi, told Reuters in a camp recently, where refugees live under thousands of tarpaulins covering the hills and rice paddies.

“Parents killed, families divided, wounds inflicted, rapes perpetrated on women. There’s a lot of terrible violence that has occurred and it will take a long time for people to heal their wounds, longer than satisfying their basic needs,” Grandi said.