In Myanmar, Rohingya Describe a Village Lost to Conflict

"All the Muslims in our village, about 10,000, fled. Some were killed by gunshots, the rest came here. There's not a single person left." 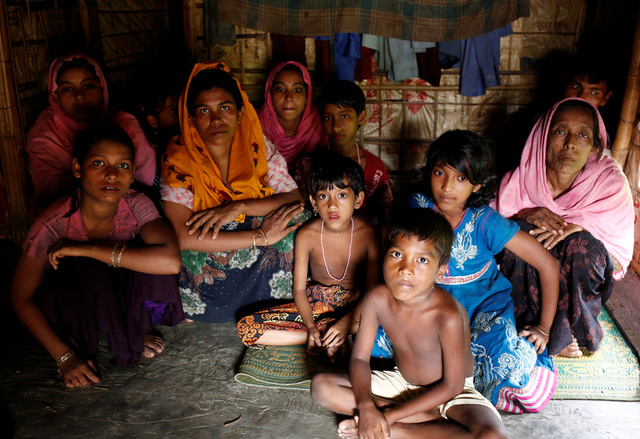 Now in Bangladesh, 20 Muslims and Hindus gave interviews in which they recounted how they were forced out of their village of Kha Maung Seik in Myanmar’s Rakhine State on August 25.

“The military brought some Rakhine Buddhists with them and torched the village,” said Kadil Hussein, 55.

“All the Muslims in our village, about 10,000, fled. Some were killed by gunshots, the rest came here. There’s not a single person left.”

Hussein is staying with hundreds of other new arrivals at the Kutapalong refugee settlement, already home to thousands of Rohingya who fled earlier.

Nearly 150,000 Rohingya have arrived in Bangladesh since August 25, when insurgents of the Arakan Rohingya Salvation Army launched attacks on security forces in Rakhine State.

Reuters interviewed villagers from Kha Maung Seik and neighbouring hamlets, who described killings and the burning of homes in the military response to the insurgent attacks.

Reuters has been unable to verify their accounts. Access to the area has been restricted since October, when the same insurgent group attacked police posts, killing nine.

Myanmar says its forces are in a fight against “terrorists”. State media has accused Rohingya militants of burning villages and killing civilians of all religions.

Myanmar does not recognise the 1.1 million Rohingya as citizens, labelling them illegal immigrants from Bangladesh.

The refugees from Kha Maung Seik, and from numerous other villages across the north of Rakhine State, say Myanmar forces and ethnic Rakhine Buddhists are intent on forcing them out.

One refugee, Body Alom, 28, said he hid in forest with thousands of others when the soldiers arrived. He waited for hours before emerging to look for his family.

He says he saw corpses in paddy fields, and eventually found his mother and brother dead with gunshot wounds. Two other villagers said they saw bodies in the fields.

A military official denied that Buddhist civilians were working with authorities and instead accused Muslims of attacking other communities.

“The military arrived at the village later but did not find any bodies,” said the military source, who declined to be identified as he is not authorised to speak to media.

Another military source in the state capital, Sittwe, said Kha Maung Seik was in the conflict zone and clear information about what happened had yet to emerge.

The main village of Kha Maung Seik was home to a mixed community, with Rohingya Muslims in the majority along with about 6,000 Rakhine Buddhists, Hindus and others.

The village is known to the Rohingya as Foira Bazar for its market of about 1,000 shops where everyone did business.

But relations have been strained for some time.

A government plan to grant Hindus citizenship, violence in the state in 2012 and October, and an identity card scheme that the Rohingya rejected as it implied they were foreign, all contributed to tension, the refugees said.

Since October, more soldiers were posted near the village, with border police. Patrols went house-to-house arresting anyone suspected of having militant links, they said.

Abu Kalam, 31, showed Reuters welts on his back, arms and legs, and what he said were cigarette burns on his arms. He said he was detained by the military last month, before the attacks, as he was working in his vegetable patch with a knife.

“After October, the military told us not to have knives. When they saw me using one they arrested me,” he said, adding he was kept in a barracks for six days.

“They regularly tortured me, asking ‘are you connected with al-Yaqin?’,” he said, using another name for the rebels.

Villagers in Kha Maung Seik say they heard shooting at 2 am on August 25. A military source in Maungdaw town and two Muslim residents said militants attacked a police post near the village that night.

According to the military source, the rebels attacked with grenades then turned their attention to a Hindu neighbourhood.

Four Rohingya villagers separately gave Reuters accounts of how, at about 5 am, soldiers entered the village, firing indiscriminately. Thousands fled.

“I was at the front of a big group running for cover, but I looked back and could see people at the back getting shot,” said Abul Hussein, 28.

Later, grenades and mortar bombs were fired into the forest, according to Hussein and three other villagers.

“I saw a mortar hit a group of people. Some died on the spot,” he said.

From the forest, residents watched military and civilians loot and burn houses. Civilians helped gather bodies, according to Body Alom and two other villagers.

“They collected the bodies, searching for belongings,” said Body Alom. “They took money, clothes, cows, everything. Then they burned the houses.”

Members of Myanmar’s small Hindu community seem to have been caught in the middle. The military source said some Hindus from Kha Maung Seik were unaccounted after the militant attack.

A group of Hindu women refugees in Kutapalong said they saw eight Hindu men killed by Buddhist Rakhines after they refused to attack Muslims.

“They asked my husband to join them to kill Rohingya but he refused, so they killed him,” said Anika Bala, 15. Six months pregnant, she said Muslims helped her get to Bangladesh.

After seeing their homes burned, Kha Maung Seik’s Muslim leaders decided it was too dangerous to stay.

“We thought we might be able to return and live with other types of people,” said Mohammed Zubair, 30, assistant to the village chairman.

“But we realized that’s not possible.”

About 100 men decided to stay and fight, Body Alom said.