Rohingya Exodus the Fastest, Most Concentrated Refugee Movement in Asia Since 1971

Nearly one month into the humanitarian catastrophe and emerging regional security crisis, the world is still waiting for a meaningful reaction. 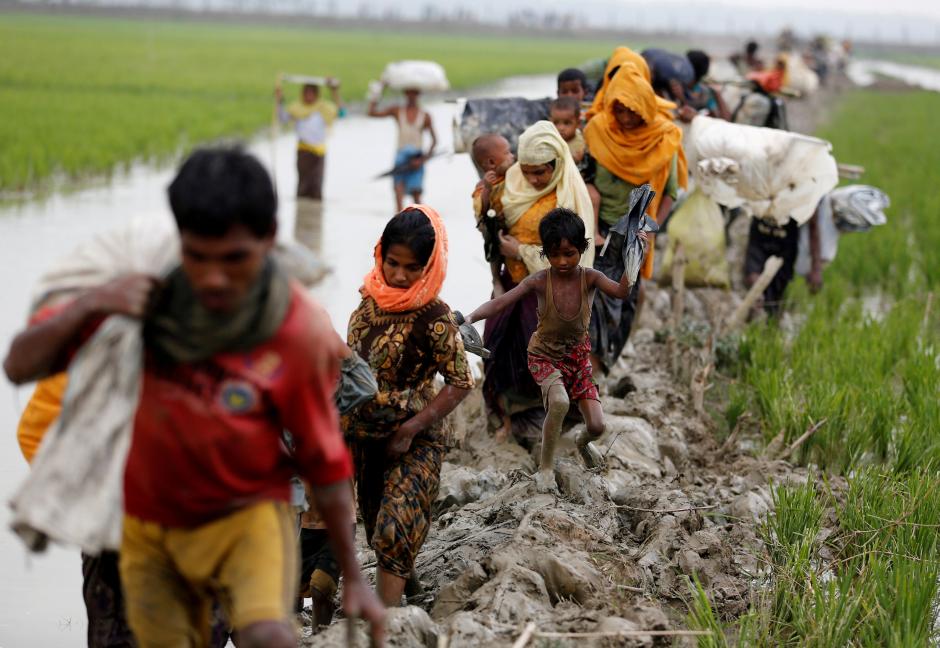 An uncle of mine, a reporter for the German news magazine, DER SPIEGEL, covered Bangladesh’s war of secession from Pakistan. I made Dhaka my home some 40 years later, for two years in a country at peace with its neighbours and covered floods, cyclones, corruption, a military coup and trials of dreadful crimes committed many years ago. This month, I was on my way to report on the fastest and most concentrated refugee movement across an international border in Asia since 1971. I have never witnessed anything like it.

Some 400 kilometres south of Dhaka, heading down the narrow strip of land along the Naf River that separates Bangladesh and Myanmar, Rafique Habib, a Bangladeshi Rohingya whose family came to Bangladesh in the 1991-92 exodus, pointed left. “They are our burning villages,” he said. Night had fallen and the columns of smoke, visible all day, had turned into fires. 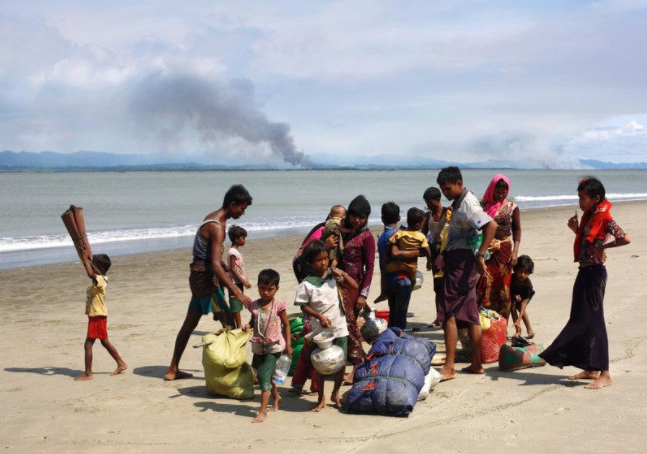 Smoke is seen on Myanmar’s side of border as Rohingya refugees collect their belongings on a shore after crossing the Bangladesh-Myanmar border by boat through the Bay of Bengal in Shah Porir Dwip, Bangladesh, September 15, 2017. Credit: Reuters/Danish Siddiqui

We headed to Ghumdum the next morning, where, in 2009, I had watched Burmese labourers frantically erect a border fence. In those days it bore the distinction of being the only fortified international border that suits the purposes of both sides. Here, the fires could be seen up-close, some 300 metres from a Bangladesh Border Guard post, on the Myanmar side.

At the makeshift refugee camp close, on no man’s land back against the fence, Anawara Begum said soldiers fired on her when she and others tried to cross a river inside Myanmar, clinging on to bamboo rafts. Another woman said soldiers firing from the top of a nearby hill shot four of her cousins dead at the same location. Nurul Islam from Razabil said soldiers set his village on fire. Women and men were separated. They raped his 13-year old sister Khadiza; local mobs mutilated her body. His father was also killed. Stumbling over dead bodies in a canal, Islam escaped, along with two brothers and his mother. His brother’s family is missing.

At the land border further south, walking against the flow of refugees – terrified and all by herself – was Ayesha Begum, a young girl from Myanmar’s Shab Bazar. She was looking for her mother and elder sister who she said were still at the border, where Bangladeshi border guards were letting refugees across in batches of 30-40. Her younger sister and brother were dead, she said.

There are a few places along the border that have remained unaffected by the exodus. At Shah Porir Dwip, the southern most point of Bangladesh, dead cows puncture the beach. Women, men and children climb out of wooden boats, many of them injured. They are the survivors. Kafaed Ullah from Hashrata said his three cousins, 10,15 and 22 years old, were all shot dead by soldiers when they tried to flee their burning village. Others speak of rape, murder, indiscriminate killings and other crimes. The boats are coming in with the tide, in a loop, heading out into the seas, thus avoiding the stretch of water where watchtowers on the Myanmar side face Bangladesh’s border security. As the sun sets, boats bedeck the horizon of the Bay of Bengal.

On the island, the graveyard now holds 19 bodies of fleeing Rohingyas whose three boats capsized in late August; many more have since overturned. An islander says the refugees pay 5,000 Bangladeshi Taka ($60) to cross the waters from Myanmar – a tenth of what it once was. 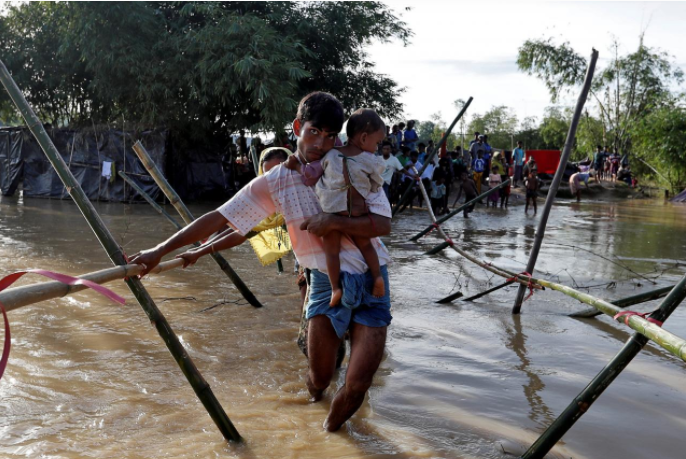 The number of Rohingya Muslims who have fled state-led massacres in Myanmar in the last three weeks has crossed 415,000; more are on their way. It brings the number of Rohingya who have fled the Rakhine state, including from earlier waves of departures in 1978 and 1991-92, to 800,000. Tens of thousands of Rakhine Buddhists have been internally displaced. The Burmese army maintains that it is conducting a legitimate clearance operation in response to attacks by Rohingya militants that killed 12 policemen on August 25. The UN has called the actions of the Burmese army “a textbook example of ethnic cleansing”.

What is happening to the Rohingya in Rakhine is – more or less – the same that happened to the people of East Pakistan (now Bangladesh) in 1971 when the Pakistani army launched a crackdown killing hundreds of thousands and sending 10 million refugees fleeing to India. To be sure, the Mukti Bahini, the Bangladeshi guerrilla resistance movement, committed terrible atrocities, killing thousands of non-Bengalis. But no one disputes that the main perpetrator of the torture, rape, mass killing and other acts of genocide that engulfed East Pakistan was the Pakistani army. The main difference, of course, is that Bangladesh became a nation state. The Rohingyas’ future now lies, unless something extraordinary happens, outside Myanmar. In Bangladesh, India, Indonesia, Malaysia and the Gulf.

Bangladesh’s prime minister Sheikh Hasina has visited the rapidly growing refugees camps. Abandoning long held state policy of calling Rohingya “Myanmar nationals”, she spoke of them as Rohingya. And she said something extraordinary: if Bangladesh can feed 160 million people, it can feed another 700,000. Her government had previously promoted a plan to put Rohingya refugees on a muddy island in the Bay of Bengal, created by the sediments of the Brahmaputra only a decade ago. But in the face of the crisis Sheikh Hasina has changed course. Her government’s internal polls show that the majority of Bangladeshis want her to shelter them. Bangladesh’s Islamists, who champion the cause of the Rohingya, don’t give her much of choice anyway.

In Myanmar, Aung San Suu Kyi, Myanmar’s de facto leader, deferring to Buddhist nationalists, is seemingly going along with a pogrom. The Burmese army, the Tatmadaw, has completely outmanoeuvred her. Suu Kyi has become the shield against an international outcry while the army gets on with domestically popular ethnic cleansing. It has cemented its position as the nation’s defender. The UN and Suu Kyi’s foreign admirers are struggling to see how to alter the facts on the ground that the army is creating beyond condemning them.

India and China, the regional powers, are reluctant to get drawn into the dispute. India needs Rakhine to one day supply its remote Northeastern states. China needs Middle Eastern gas and oil to flow through the pipelines that run from Rakhine to its Yunnan province. Bangladesh and Myanmar both have constituencies that support the fighting. Meanwhile, Islamists are burning to insert foreign fighters into Rakhine, adding to the toxic mix. The Burmese army has radicalised its western border and punched a hole into it. It all looks like a nasty, protracted conflict in the very spot where economic planers and politicians had once hoped a land bridge between South and Southeast Asia would emerge.

Also read: India’s Supreme Court Petitioners Must Be Made to Expunge Their Bigotry Against the Rohingya

Many observers have called for a need for balance and have stressed the complexity of the situation in Rakhine – Myanmar’s poorest state. Especially those who deal with the authorities in Nay Pyi Taw and had high hopes for a reformed, new Myanmar, supposedly snatched from China’s orbit.

But the compass reading is clear and simple.

Back in the capital, Dhaka, the first question two foreign diplomats asked me unprompted, in two separate exchanges, was whether the Burmese army was implementing a “final solution” – using the words for the Nazi plan for the expulsion and extermination of the Jews during the second world war.

Unswayed by detailed accounts ethnic cleansing by terror and expulsion, regional powers are standing behind Myanmar’s military rulers. Nearly one month into a humanitarian catastrophe and emerging regional security crisis, the world is still waiting for a meaningful reaction.

Tom Felix Joehnk is The Economist’s correspondent in Bangkok.