Rohingya in Bangladesh Camps Terrorised by Murders and Masked Men

Rohingya Refugees, whose have travelled to Bangladeshi camps in order to escape the violence is Rakhine have been assaulted on many occasions by a group the police call the Arakan Rohingya Salvation Army 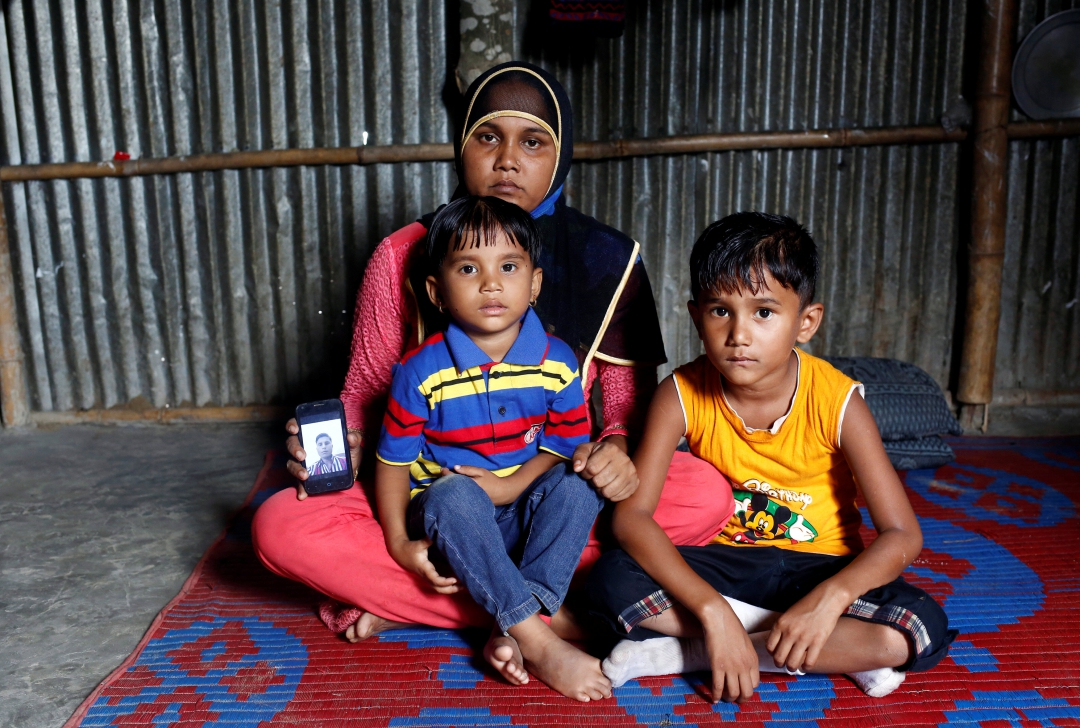 Noor Ankis, 25, whose husband Ayub, a leader of the unregistered makeshift camp in Kutupalong, was killed late last month, poses for a picture with her two children in Cox’s Bazar, Bangladesh, July 9, 2017. Credit: Reuters/Mohammad Ponir Hossain

Kutupalong Makeshift Camp, Bangladesh: As fellow Muslims were celebrating the end of Ramadan late in June, Noor Ankis and her neighbours buried her husband at the refugee camp in Bangladesh where he had lived for years.

Mohammed Ayub’s body – his throat slit and hands tied behind his back – had been found dumped in a desolate corner of the camp for Rohingya Muslims who have fled neighbouring Myanmar.

Thirty-year-old Ayub was one of three Rohingya men whose bodies were found over the past few weeks. Aid workers and long-time residents say the incidents, along with the stabbing of a community leader, amount to the worst violence in the camps since the Rohingya began fleeing Buddhist-majority Myanmar more than a quarter of a century ago.

Refugees, whose numbers have swelled since fighting late last year in Myanmar’s Rakhine state, also report masked men roaming the dark streets of the two camps in Kutupalong at night.

Bangladesh police and aid workers say a struggle for control of supplies to the camps is behind the violence.

“They beat me and my sister and dragged him out of the house,” Ankis told Reuters, as her 7- and 3-year-old children slept by her on the newly cemented floor.

“The kidnappers called me from his number and threatened to kill me too. I’m also getting threats in the name of al-Yaqin.”

She was referring to the militant group Harakah al-Yaqin, or “Faith Movement”, whose attacks on Myanmar border police posts in October prompted a security crackdown in which troops have been accused of murder and rape of Rohingya civilians.

Police say it is unclear whether the insurgent group, which now wants to be known as the Arakan Rohingya Salvation Army, was involved in the violence in the camps or whether others were using its name to intimidate refugees.

The group, whose leader spoke to Reuters in an interview in March, did not respond to an email seeking comment.

Noor Ankis, 25, whose husband Ayub, a leader of the unregistered makeshift camp in Kutupalong, was killed late last month, poses for a picture with her two children in Cox’s Bazar, Bangladesh, July 9, 2017. Credit: Reuters/Mohammad Ponir Hossain

More than 75,000 Rohingya have fled northwestern Rakhine state to Bangladesh over recent months, joining tens of thousands already there. Myanmar’s military and government have denied almost all allegations of atrocities by security forces.

While the government announced the end of its counterinsurgency operation in February, tensions in Myanmar have risen again in recent days after village administrators were murdered and troops killed three people while clearing a Rohingya militant camp.

The population of the official and makeshift camps in Kutupalong, around 400 km (250 miles) southeast of Dhaka, has swelled to around 86,000, from 49,000, since the October exodus, according to a Bangladeshi government document seen by Reuters.

While the nearly 14,000 refugees in the registered camp receive medical care and food from the United Nations High Commissioner for Refugees (UNHCR), the majority living in plastic-and-mud huts of the cramped makeshift camp are largely left to fend for themselves.

“There’s always that resources gap and that’s the reason there is always tension between the registered refugees and those outside,” said Sanjukta Sahany, a senior official with the International Organization for Migration in Bangladesh that is charged with coordinating relief efforts by various UN agencies.

“Post-influx the security situation has deteriorated.”

Shinji Kubo, UNHCR’s Bangladesh boss, said he was pressing the local government to let his agency expand its role beyond the two registered camps in the country.

Ayub’s wife, Ankis, said her husband had been involved in an ongoing dispute with drug users in the makeshift camp in Kutupalong, according to a police report seen by Reuters. He was kidnapped by a group of 20-25 machete-wielding men who barged into their shack on the night of June 14, she said. 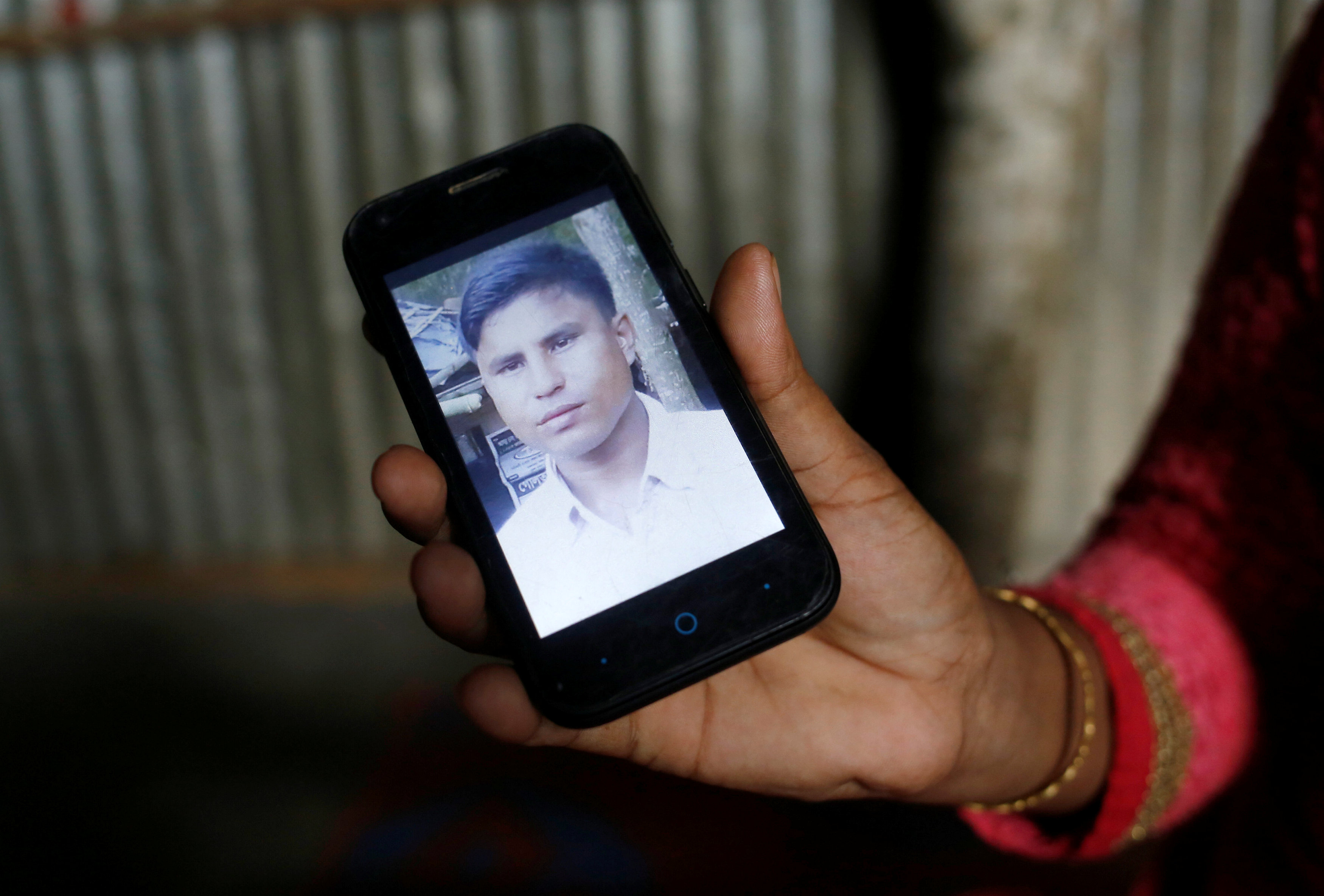 Noor Ankis shows the picture of her husband Ayub, a leader of the unregistered makeshift camp in Kutupalong, who was killed late last month, in Cox’s Bazar, Bangladesh, July 9, 2017. Credit: Reuters/Mohammad Ponir Hossain

Reuters reported in February that Bangladesh blames the Rohingya influx for the soaring use of methamphetamine drug in the country.

Ayub’s body was recovered from a muddy wasteland between two hillocks in Kutupalong on June 25. The body of another man, Mohammed Selim, who was also abducted on June, had been found in a similar state at the same place a week earlier.

Three suspects have been arrested in connection with the kidnapping and killing of Ayub, though the motive remained unclear, senior police officer Afruzul Haque Tutul said.

In the camps, refugees remain fearful of the mysterious masked men who continue to be reported moving around at night.

“I was sleeping with my two children and my wife when they called my name,” said a 30-year-old registered refugee, who was twice approached by groups of 10-12 men, though he did not open his door. “The one hour they waited outside my home was the longest one hour of my life.”