The Rising Collateral of Civilian Deaths in Iraq and Syria

In its war against ISIS, the Trump administration has escalated its military intervention in the Middle East from extermination to straight up annihilation. 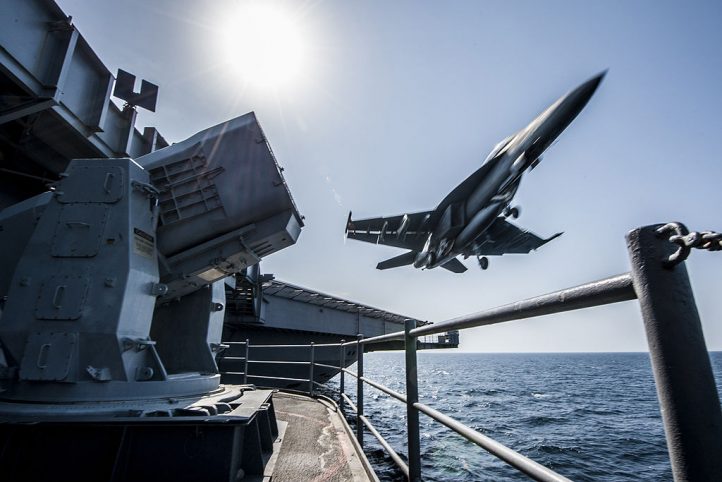 F/A-18 Super Hornet taking off from USS Carl Vinson to carry out strikes on IS targets in Syria. Credit: Wikimedia Commons

The ongoing effort of the United States to eradicate the ISIS by aggressively launching airstrikes against targets that include non-combatants is causing significant harm to civilians in Iraq and Syria.

Estimates of civilian deaths from airstrikes range from the hundreds to the tens of thousands. Although the US government says that it has killed 603 civilians in airstrikes since the start of military operations in 2014, the monitoring group Airwars estimates that airstrikes have killed at least 4,500 civilians, including nearly 1,000 children.

Some of the strikes have been horrific. One attack in Mosul last March killed at least 100 civilians and injured countless more. “Dozens of Iraqi civilians, some of them still alive and calling out for help, were buried for days under the rubble of their homes in western Mosul after American-led airstrikes flattened almost an entire city block,” The New York Times reported.

Officials in Washington deny any wrongdoing. They insist that they are taking every precaution to protect civilians. They also argue that they are not intentionally killing civilians, despite the fact that President Trump promised during his presidential campaign to go after civilians. When it comes to terrorists, “you have to take out their families,” Trump said.

Others argue that civilian deaths cannot be avoided. Lieutenant General Stephen Townsend, the commander of coalition forces, said during a press conference last March that civilian deaths result from the fog of war. “And this is why it’s not a war crime to accidentally kill civilians,” Townsend said, in a misinterpretation of the law.

Still, US officials know that they are responsible for killing civilians in Iraq and Syria. For over the past year, at least, they have been deliberately striking targets that they know will result in civilian casualties.

Clear evidence emerged in January 2016 after US forces bombed a site in a civilian area of Mosul that the ISIS had been using to store money. “US commanders had been willing to consider up to 50 civilian casualties from the airstrike due to the importance of the target,” CNN reported.

For others, US military forces were still dealing with too many restrictions. Upon entering office, President Trump moved to implement a more aggressive military campaign. “We have not used the real abilities that we have,” Trump said. “We’ve been restrained.” Expanding the Obama administration’s program of exterminatory warfare, which by that point had already killed about 60,000 IS fighters, Trump decided to implement what administration officials call “annihilation tactics.” According to Secretary of Defence James Mattis, Trump “directed a tactical shift from shoving ISIS out of safe locations in an attrition fight to surrounding the enemy in their strongholds so we can annihilate ISIS.”

The Trump administration’s tactical shift has had significant consequences for civilians. By surrounding targets to annihilate them, coalition forces have been killing far more civilians in Iraq and Syria. It “appears that the number of civilian casualties has risen in recent months,” The Los Angeles Times reported in April. The New York Times agreed, reporting in May that the “number of civilians killed in American-led airstrikes in Iraq and Syria spiked this year.” Earlier this week, The Daily Beast provided additional confirmation, reporting that “all parties agree that casualty numbers are steeply up.”

Still, US officials continue to insist that they are not to blame. They characterise civilian deaths as accidents or mistakes. In other words, they keep shifting the blame elsewhere, just as Townsend did when he once again blamed the fog of war. The entire situation is “sad and it’s an unavoidable part of war,” he said.

Edward Hunt writes about war and empire. He has a PhD in American Studies from the College of William & Mary.

This article was originally published in Foreign Policy in Focus.