Rex Tillerson's speech is the latest indication that the Trump administration, despite its many domestic distractions, is clear-eyed on India. 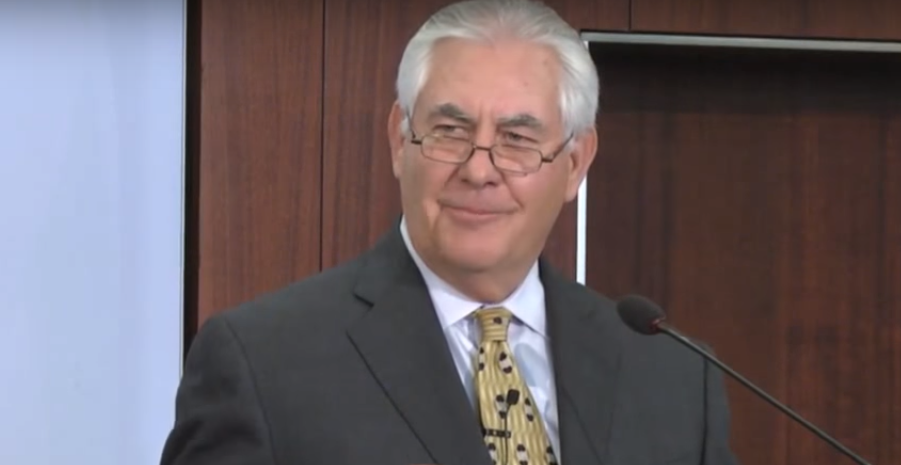 US secretary of state Rex Tillerson speaking at the Center for Strategic and International Studies on 'Defining our relationship with India for the next century'. Credit: YouTube screenshot

Washington: US secretary of state Rex Tillerson, comparing the rise of India and China, accused Beijing of undermining international law, using “predatory” financial tactics and burying smaller countries in debt, and praised India as a “beacon” of a rules-based order.

Tillerson called the US and India “two bookends of stability” in the Indo-Pacific region where China’s “provocative actions” directly challenge the norms of international order. It was a clear and counter vision to one propagated by Beijing.

A “quiet conversation” has already begun among Asian nations, he said, to create alternative financing mechanisms for countries caught between China’s financial muscle and their need for development.

“The world’s centre of gravity is shifting to the heart of the Indo-Pacific. The US and India with our shared goals of peace, security, freedom of navigation and a free and open architecture must serve as the eastern and western beacons of the Indo-Pacific,” Tillerson said, days before he lands in New Delhi. He is also stopping in Pakistan, Saudi Arabia and Qatar.

He called Pakistan an “important partner” but added that it must take “decisive action against terrorist groups” based within its borders. Later, in answer to a question, Tillerson implied that stability in Afghanistan was not linked to the resolution of India-Pakistan issues, contrary to what the Pakistanis and many US experts say. Peace in Afghanistan must come first because it will stabilise the region and create “better” conditions for India-Pakistan relations, not vice versa.

“We intend to work closely with India and with Pakistan to, we hope, ease tensions along their border as well,” adding that Pakistan had “two very troubled borders.” His comments on Pakistan were few and the speech was titled ‘Defining Our Relationship with India for the Next Century.‘

It is significant that Tillerson chose to make his first major foreign speech on India, where he is expected on Tuesday (October 24) for important bilateral talks. No other country, including NATO allies, has had the benefit of consistency of messaging and positive signaling from the Trump administration than India.

Tillerson’s speech was another indication that this administration, despite its many domestic distractions and dramas, is clear-eyed on India. President Donald Trump set the tone when he called India “a true friend” as he welcomed Prime Minister Narendra Modi to the White House in June.

Every iteration since, including a speech by vice president Mike Pence to the US-India Business Council and Congressional testimonies of defence secretary James Mattis on South Asia, has built on the narrative. Tillerson’s speech has now placed the Indo-US partnership as a direct response to China’s moves.

The speech was a “compare and contrast” of the two Asian giants – India as a valued partner and fellow traveler, China as an outlier threatening smaller countries. It should clear lingering fears of an impending India-Pakistan hyphenation. If anything, it was an India-China hyphenation, an equivalence that drives Beijing batty.

“China, while rising alongside India, has done so less responsibly, at times undermining the international, rules-based order even as countries like India operate within a framework that protects other nations’ sovereignty,” Tillerson said in a direct indictment.

“We will never have the same relationship with China, a non-democratic society, that we can have with a major democracy,” he added in answer to a question on the “complex power geometry” in Asia.

This stark differentiation between China and India will, no doubt, be music to New Delhi’s ears and a sonic boom in Beijing where Chinese President Xi Jinping is anointing himself for his next term at the 19th Party Congress.

US secretary of state Rex Tillerson speaking at the Center for Strategic and International Studies on ‘Defining our relationship with India for the next century’. Credit: YouTube screenshot

Tillerson’s comments on China’s expansionist policies were the most explicit thus far by a Trump administration official. They came after Mattis chided China in testimony to the US Congress for “dictating one belt, one road” (OBOR) to other countries when in a globalised world, there were “many belts and many roads.”

Between Tillerson and Mattis, the Trump administration policy on OBOR appears to be evolving from grudging acceptance in the early days to active disagreement, even opposition. The realisation has come after nine months of discussions with other countries, including India and Japan, and exchanges with financial experts.

India was the only major country not to attend the OBOR summit in Beijing. New Delhi’s opposition to OBOR was based on specific issues of sovereignty, transparency and financing methods. It would appear that India has succeeded in persuading Washington to a great extent because Tillerson’s criticisms echoed many points India has made about OBOR.

He honed in on China’s “financial mechanisms”, which result in “saddling them with enormous levels of debt” while creating no jobs because foreign workers are brought in. As a former CEO of ExxonMobil, Tillerson knows how financial deals can be structured with “very subtle triggers” that result in default and the conversion of debt to equity – precisely the way China has gained in Sri Lanka and will very soon in Pakistan.

To strengthen the security architecture in Asia, Tillerson advocated an expansion of the US-India-Japan trilateral to include Australia, a country New Delhi has a difficult time trusting because of its wavering views on China. The original “quad” or the “concert” of democracies did include Australia until Canberra caved in to Chinese pressure under a Mandarin-speaking prime minister.

While the US pins one side of the Indo-Pacific and India the other with Japan in the middle, there was a need for an “important pinpoint” in the South Pacific, which Australia could do, Tillerson argued.

In another interesting comment, Tillerson said India had done a “real accounting” of its “history of relationships” and how they served India’s advancement or didn’t. It seemed to have come to the same conclusion as the US – a democratic partner was more valuable.

The Indo-US relationship is built on “shared values” and it was decided “this is where we want to go.” This was a clear reading of the Modi government’s steady move towards the US.