The states' brief tells the Supreme Court that the order did not unconstitutionally single out Muslims and was needed to protect national security. 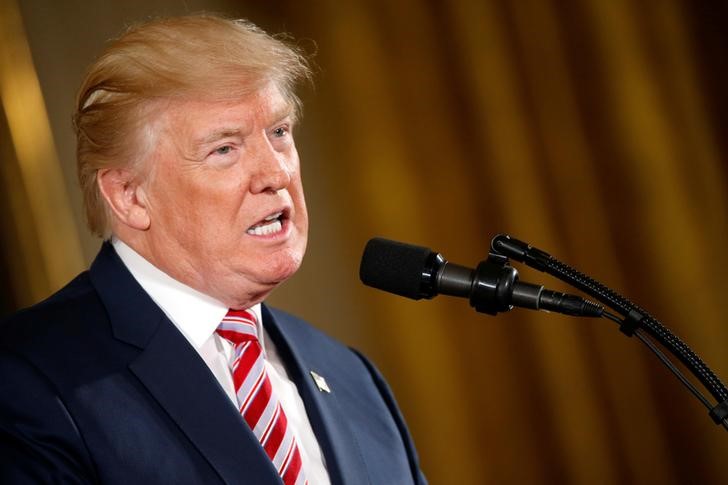 US President Donald Trump speaks during an event announcing the Air Traffic Control Reform Initiative in the East Room of the White House in Washington, DC, US June 5, 2017. Credit: Reuters/Joshua Roberts

Washington: Republican officials from 16 US states led by Texas said on Tuesday, June 6, that they have come to the defence of President Donald Trump‘s ban on travelers from six Muslim-majority nations, telling the Supreme Court the order did not unconstitutionally single out Muslims and was needed to protect national security.

The officials filed a legal brief with the Supreme Court as it mulls whether to take up the Trump administration’s appeal of lower court rulings blocking the travel ban signed by the Republican president on March 6 and let it go into effect.

In the states‘ brief, filed on Monday, Texas solicitor general Scott Keller wrote that the executive order does not mention religion at all and distinguishes people based only on nationality.

“The executive order therefore is emphatically not a ‘Muslim ban,'” Keller wrote.

Keller added that courts should be careful when second-guessing a president’s national security determinations, an argument that echoes the administration’s view that the judiciary should defer to the president on such matters.

The brief said the order did not violation the constitution’s ban on the government favoring or disfavouring any particular religion or its guarantee of due process.

The filing came after the administration asked the high court last Thursday to allow the order to take effect.

Three Republican attorneys general came from states with Democratic governors: Louisiana, Montana and West Virginia. Most of the states had also backed Trump earlier in the litigation.

Many Democratic state officials have opposed the ban in lower courts.

The high court is due to review legal papers filed by the ban‘s challengers, backed by the American Civil Liberties Union, before acting. The briefs are due on Monday.

A key issue before the justices in whether Trump‘s comments during the 2016 president campaign, including calling for “a total and complete shutdown of Muslims entering the US,” can be used as evidence that his order was intended to discriminate against Muslims.

The administration filed emergency applications with the justices seeking to block lower court rulings that went against Trump‘s order barring entry for people from Iran, Libya, Somalia, Sudan, Syria and Yemen for 90 days while the US government implements stricter visa screening.

The move comes after the Richmond, Virginia-based 4th US circuit court of appeals on May 25 upheld a Maryland judge’s ruling blocking the order.

Potentially making it harder for his lawyers to win at the Supreme Court, Trump again commented on the case on Monday, tweeting complaints that his own administration had issued a “watered down, politically correct version” of an earlier order he signed on January 27 that also was blocked by courts.