Anger Among Relatives as Search for Mexico Quake Survivors Narrows

Rescuers are unlikely to find any more survivors of Mexico's earthquake still buried in the ruins, the emergency services chief said. 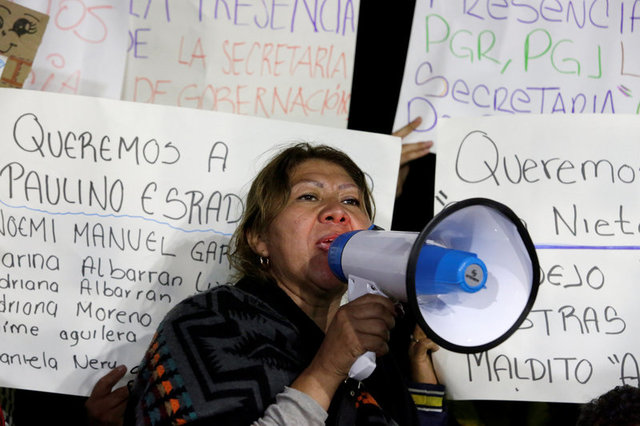 A family member addresses the media during a news conference, near the site of a building collapsed in an earthquake, in Mexico City, Mexico September 25, 2017. Credit: Reuters

Mexico City: Rescuers are unlikely to find any more survivors of Mexico’s earthquake still buried in the ruins, the emergency services chief said, with anger rising about a lack of information among relatives of an estimated 40 people still buried under rubble.

Tuesday marks one week since the 7.1 magnitude quake struck at lunchtime, killing 331 people, damaging 11,000 homes and leading to a outpouring of civilian volunteers to aid victims and grieving relatives.

Luis Felipe Puente, coordinator of Mexico’s Civil Protection agency, told Reuters that rescuers would continue hand-picking through the debris at no more than four sites until Thursday.

“I can say that at this time it would be unlikely to find someone alive,” Puente said, considering that specially trained dogs have yet to pick up the scent of survivors.

Dozens of people were still missing, including up to 40 who may have been trapped beneath a collapsed office building in the Roma district of Mexico City. One person was believed missing at each of three other sites in the capital.

Mexico has been hit by two major earthquakes this month and the seismic activity continued on Tuesday with the Popocatepetl volcano to the south of Mexico City sending a two-kilometer (1.2-mile) plume of smoke and ash into sky, its third big exhalation in recent days.

The series of disasters has quickly turned political, with parties offering to donate their public funding to disaster relief and officials eager to shake off any blame for buildings that collapsed.

At the office building, relatives protested overnight, increasingly angry at the slow progress there in recovering loved ones and a lack of information that has fed into Mexicans’ deep-seated mistrust of official versions of events.

“They don’t give us any information. It’s the same every day. Every day they tell us to wait and wait. They have pulled out lots of bodies but they don’t tell us where they take them, where they are,” said Jovita Villegas, 62, whose niece, an accountant, is believed to have been on the fourth floor when the six-storey office block collapsed.

“All we want is the truth.”

At a building containing a textile factory and other workshops in the centre of the capital, a spontaneous memorial of flowers, hand written notes and graffiti also reflected mistrust of authorities.

“The life of a seamstress is worth more than your machines. Justice!” read a message painted on the broken down wall at the site, where the rubble of the building was removed within days,angering relatives who want an investigation of what happened.

However, others at the Roma office block said they recognised the work was difficult and praised the army and volunteers who worked day and night for a week digging for victims.

“There will be a result, and we will accept it,” said Victor Jolalpa, 57, whose brother-in-law was trapped in the rubble.

The week began with signs that Mexico was resuming its routine as the streets filled with traffic and more than 44,000 schools in six states reopened.

In the capital city, however, only 676 of the more than 8,000 public and private schools resumed classes.

The quake, coming exactly 32 years after a 1985 earthquake that killed some 10,000 people, delivered a massive psychological blow that specialists say will take time to overcome.

“The children are in crisis and don’t want to talk. Some kids didn’t even remember their own names,” said Enriqueta Ortuno, 57, a psychotherapist who has been working with victims in the hard-hit Xochimilco district.

Much of the nation’s attention was focussed on a fallen school in Mexico City where 19 children and seven adults died. The top official in the municipality where the school was located said the building’s paperwork was in order but that she was investigating the quality of the construction.

That school was one of many buildings that prosecutors will investigate, Puente said. Roughly 10% of damaged buildings were constructed after strict building codes were enacted in the wake of the 1985 earthquake.

In Mexico City, at least 187 people died in 38 buildings that collapsed. Mayor Miguel Angel Mancera said thousands of families whose homes were now uninhabitable would be offered 3,000 ($170) pesos monthly in temporary rent assistance, part of a package aimed at fostering reconstruction in the city

Rescuers have pulled 69 survivors from quake-damaged properties. Puente recognised some “deficiencies” in coordinating relief efforts, but overall, he said, “The government today is an international benchmark.”