A resolution adopted by the Geneva staff blames the International Civil Service Commission which presides over the salary structures for failing to address the issue. 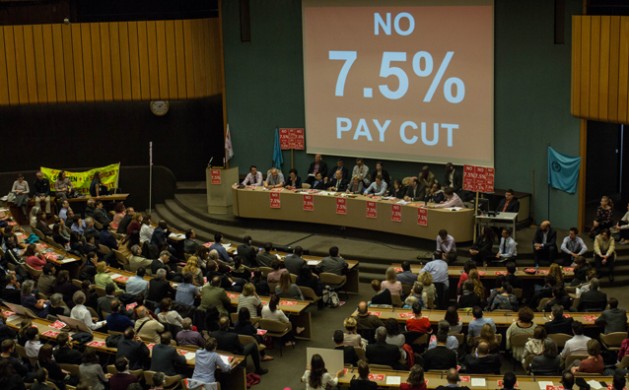 United Nations: Facing significant reductions in US financial contributions from a politically unpredictable Donald Trump administration, the UN secretariat is gearing itself for a rash of austerity measures and budgetary cuts, including downsizing peacekeeping operations and cuts in development aid, reproductive health and overseas travel.

But UN staffers in Geneva, numbering over 5,400 in the professional category of employees, are already on the warpath because of a proposed 7.5% reduction in their take-home pay triggering a strong backlash and public demonstrations – and perhaps leading to a possible work stoppage.

The proposed salary reductions in Geneva aren’t related to the impending US cuts to the UN’s regular and peacekeeping budgets in New York.

A resolution adopted by the Geneva staff, at an “extraordinary general meeting” last week, blames the International Civil Service Commission (ICSC), which presides over salary structures, for “failing to address the deep concerns and questions raised by staff federations and the heads of ten Geneva-based agencies over the proposed cut to post adjustment that would result in a reduction in take-home pay of 7.5% [or more].”

The resolution says the ICSC has refused three times to meet with staff and explain the proposed cuts despite ongoing and serious questions about its data-handling and statistical analysis.

Ian Richards, president of CCISUA, told IPS the resolution was unprecedented and “shows how angry staff in Geneva are at the ICSC’s manipulation of its own methodology to cut pay in what unfortunately is one of the world’s most expensive cities where local salaries rose almost 6% in the last five years”.

“We’re under huge pressure from staff to get the work stoppages going,” he warned.

He said the decision to cut pay was taken by ICSC, but given its failure to provide convincing explanations to the heads of human resources of the organisations in Geneva, most organisations will not implement it for now.

“Those same organisations have also sent a team of statisticians to New York to go through the ICSC’s calculations. Unfortunately the UN secretariat has decided to break ranks, meaning staff in Geneva will be paid different salaries for the same work.”

Richards said pay cuts are also poor employment practices and are only taken by employers in crisis and after negotiating with staff unions.

“The fact that the ICSC increased pay in New York and Washington DC shows we aren’t there right now,” he added. 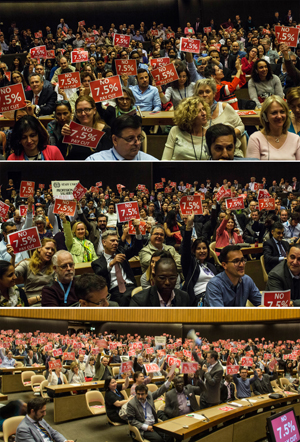 Geneva is the first UN duty station to be affected by the new rules, but there are 85 duty stations to follow. This summer, several European Union duty stations such as Paris, Vienna, Rome and Madrid, will be up before the ICSC.

According to the staff unions, New York salaries went up by 2.2% in February.

“This isn’t about a choice between a pay cut or preserving jobs in Geneva. Organisations did not factor in the pay cut while setting their budgets. Meanwhile Swiss salaries increased 5.7% between 2010 and 2015, the same period over which the ICSC is trying to cut ours,” says CCISUA.

There is also a widespread belief that Geneva was victimised first because UN member states aren’t happy at having to pay $1 billion on a new building, which they were strong-armed into paying for, and particularly with possible cost overruns.

Meanwhile, since Washington is the largest single contributor both to the UN’s regular and its peacekeeping budgets, a proposed 29% in US foreign assistance by the Trump administration is expected to have a heavy impact on the United Nations in New York.

Currently about 22% of the UN’s biennium regular budget of $5.4 billion comes from the US. So does 28% of the UN’s peacekeeping budget of about $8 billion.

Asked about the impending cuts proposed in the US budget, UN spokesman Stephane Dujarric told reporters last week: “We’re obviously studying the [US] budget, going through some of the numbers. I think, from where we stand and looking at the budget, as proposed now, would make it simply impossible for the UN to continue all of its essential work advancing peace, development, human rights, and humanitarian assistance around the world”

Dujarric said that even before the proposed US cuts were announced, secretary-general Antonio Guterres has remained engaged in bringing out reforms in the UN system “ensuring that the UN is fit for purpose, delivers what it’s meant to deliver”.

He said Guterres has put out a number of directives to staff and the secretariat – over which he has authority – on limiting the amount of travel to necessary-travel only.

“I think the secretary general is extremely aware of the cost… of the monies that is entrusted to us, and he would like to see a reduction in the number of expenditures, and he’s asked his managers to look at that. As for himself, he has also cut down drastically on the delegations and the number of people that travel with him.”

But still, said Dujarric, the UN needs resources to deliver on its mandates laid out by the 193-member General Assembly.

On cuts, Richards said reducing the size of UN staff delegations is probably a good idea. “But at the end of the day, travel is only a small part of the regular, Trump-affected budget. Much travel is paid from extra-budgetary sources, such as projects and events that require travel,” he noted.

Reflecting on the situation in Geneva, Richards pointed that what was noteworthy is that the ICSC decided to remove mitigating measures that would have softened the impact of the cut just before it started working on Geneva.

“The ICSC has agreed to review its decision at its next meeting in July and we hope it will put things right. Many staff have told us they will return from their holidays if need be to take collective action”, he warned.