In the Pakistani Media, Denial of Surgical Strikes is the Big Story

The Pakistani foreign office has rubbished claims of the surgical strike, saying that they are baseless. 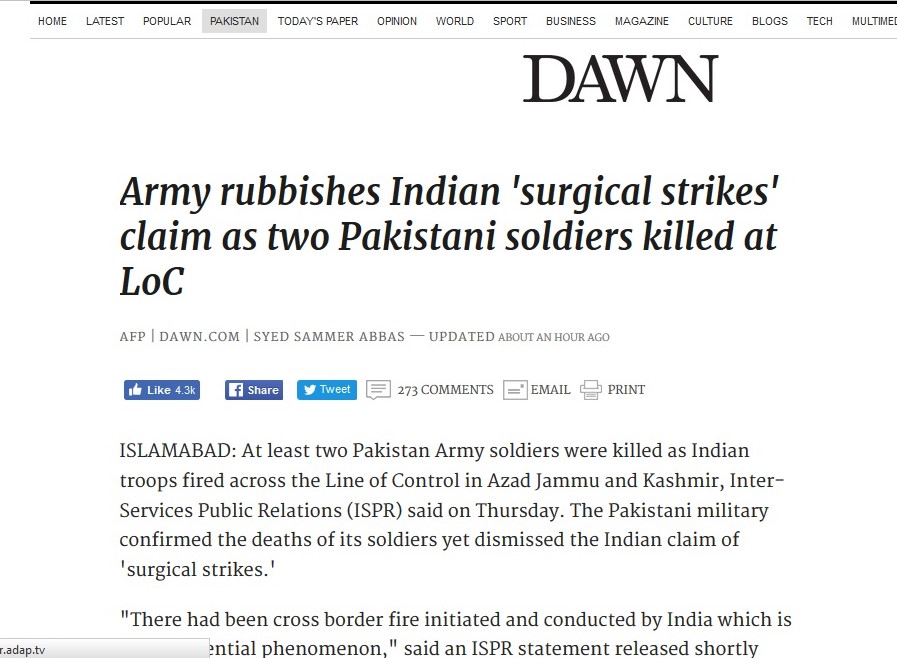 Screenshot of The Dawn's report

New Delhi: If ten days after Uri, the Indian media was full of reports of how the killing of 18 had been ‘avenged’, the media in Pakistan went big with the Pakistani military’s flat denial of any “surgical strike” by India across the Line of Control.

“The Indian Army conducted surgical strikes at LoC, so that these terrorists don’t conduct terrorist activities and endanger lives of Indians,” the Indian director general, military operations had said.

The Pakistani media however, has denied the Indian claim  based on a statement released by the Inter-Services Public Relations (ISPR). Screenshot of the Express Tribune‘s report.

According to the Express Tribune, Asim Bajwa of the ISPR said that India’s claims of surgical strikes are baseless and Prime Minister Nawaz Sharif condemned the “naked aggression of Indian forces.” Screenshot of the The News’s report

Instead, the Pakistani media reports that cross-border fire was exchanged. The News reported that the cross border fire was “befittingly responded” while reiterating that authorities had rubbished claims of a surgical strike. Two soldiers, they reported, were killed in the “unprovoked firing” by the Indian Army, as was acknowledged by the ISPR. They also quoted the foreign office which had said that “falsified statements can only escalate the already fragile security situation. Dawn reported Pakistani defence minister, Khwaja Asif, stating that nine soldiers had been injured in the cross fire. They also quoted Pakistani foreign office spokesperson, Nafees Zakaria, who said, ““India is trying to make fool of its own people and the international community,” Jung: We are Responding to Indian provocations with Responsibility- Asim Bajwa

The Urdu publication, Jang, reported Bajwa saying that Pakistan will respond to India’s provocations with responsibility.