The Supreme Court said Nawaz Sharif is not fit to hold office and ordered a criminal investigation into the corruption charges against him and his family. 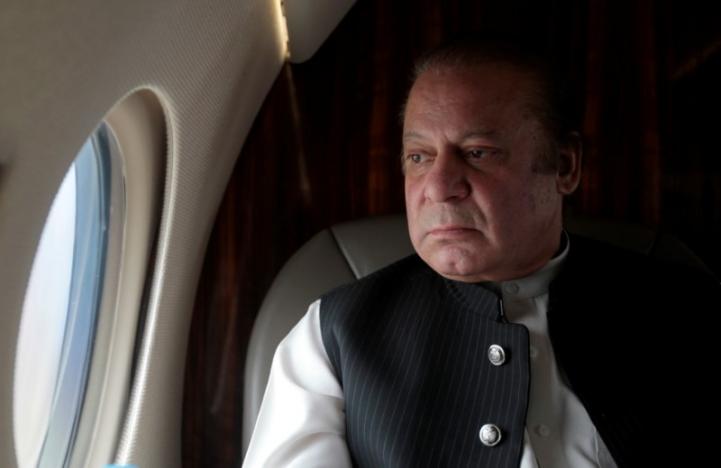 Pakistani Prime Minister Nawaz Sharif looks out the window of his plane after attending a ceremony to inaugurate the M9 motorway between Karachi and Hyderabad, Pakistan February 3, 2017. Picture taken February 3, 2017. Credit: Reuters/Caren Firouz

Pakistani Prime Minister Nawaz Sharif looks out the window of his plane after attending a ceremony to inaugurate the M9 motorway between Karachi and Hyderabad, Pakistan on February 3, 2017. Credit: Reuters/Caren Firouz

Islamabad: Pakistan Prime Minister Nawaz Sharif on Friday resigned from his post, his office said, hours after the country’s Supreme Court disqualified him over corruption claims against his family.

The Supreme Court said Sharif is not fit to hold office and ordered a criminal investigation into him and his family. The court also disqualified finance minister Ishaq Dar.

The prime minister’s office said in a statement that Sharif has “stepped down” despite having “serious reservations” about the judicial process.

Pakistan’s top court on Friday disqualified Sharif from office after a damning corruption probe into his family wealth, cutting short his third stint in power.

The Supreme Court dismissed Sharif after an investigative panel alleged his family could not account for its vast wealth. Domestic media reported a criminal investigation would also be launched against the premier and his family.

“He is no more eligible to be an honest member of the parliament and he ceases to be holding the office of prime minister,” Judge Ejaz Afzal Khan said in court.

Sharif, 67, denies wrongdoing and has warned his ouster would destabilise Pakistan at a time when the economy was rebounding after a decade of political and security chaos.

Sharif has alleged a conspiracy against him, although he has not named anyone. His allies, however, have privately spoken of elements in the judiciary and the military, with whom Sharif has strained relations, acting against him. The army denies any involvement.

Sharif’s opponents say the prime minister is concocting claims of conspiracy to save his skin, saying he has lost all moral authority to govern.

There was a heavy police and army presence around the court in the hours before the ruling. 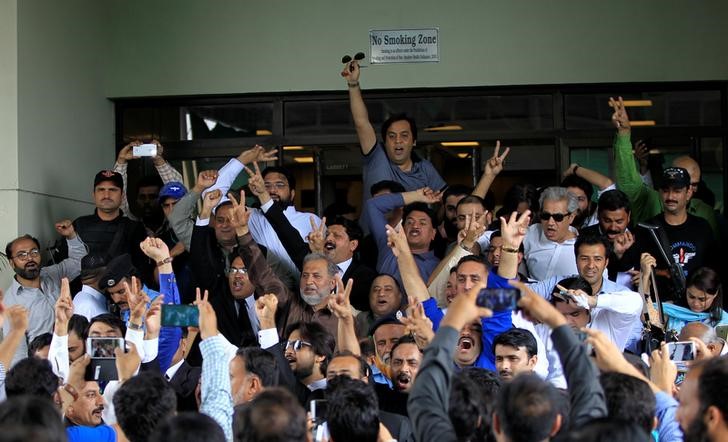 Several cabinet ministers, including Sharif’s closest allies, said before that the ruling party would respect the Supreme Court verdict.

Huma Yusuf, a columnist for Pakistan’s Dawn newspaper, said Sharif’s removal would send a powerful message to the political elite that rampant corruption will be investigated, but it would also deal a blow to Pakistan’s frail democracy.

“The question will be whether there are sufficient gains in terms of accountability to offset the step back in democracy,” she said.

Sharif, the son of an industrialist, saw both of his first two stints in power cut short in the 1990s, including by a military coup by General Pervez Musharraf in 1999.

The Supreme Court agreed last year to investigate the Sharif family’s wealth after the opposition threatened protests after the leaking of the “Panama Papers”, which revealed his family had bought posh London apartments through offshore companies.

The Supreme Court ruled in April there was insufficient evidence to remove Sharif from office – by a 2-3 verdict – but it ordered a probe by an investigative panel that included members of the military intelligence agencies.

The Joint Investigation Team (JIT) this month returned its findings in a 254-report that said Sharif’s family assets do not match their earnings. The panel also accused his children, including heir apparent Maryam, of signing forged documents to obscure ownership of the London flats.

They all deny wrongdoing.

Michael Kugelman, a South Asia specialist at the Woodrow Wilson Centre, said Sharif’s ouster would leave Pakistan in a “precarious” position but added that the country has a long history of dealing with such disqualifications.

The Supreme Court in 2012 disqualified then-Prime Minister Yusuf Raza Gilani over a contempt of court case.

“This wouldn’t exactly be uncharted territory for Pakistan, because we’ve seen this movie before,” he said.