Perceiving the 'Other' in Pakistan, Within and Across Borders

With rising nationalism premised on religious identity on both sides of the border, religious minorities have to constantly prove their Pakistani- or Indian-ness. 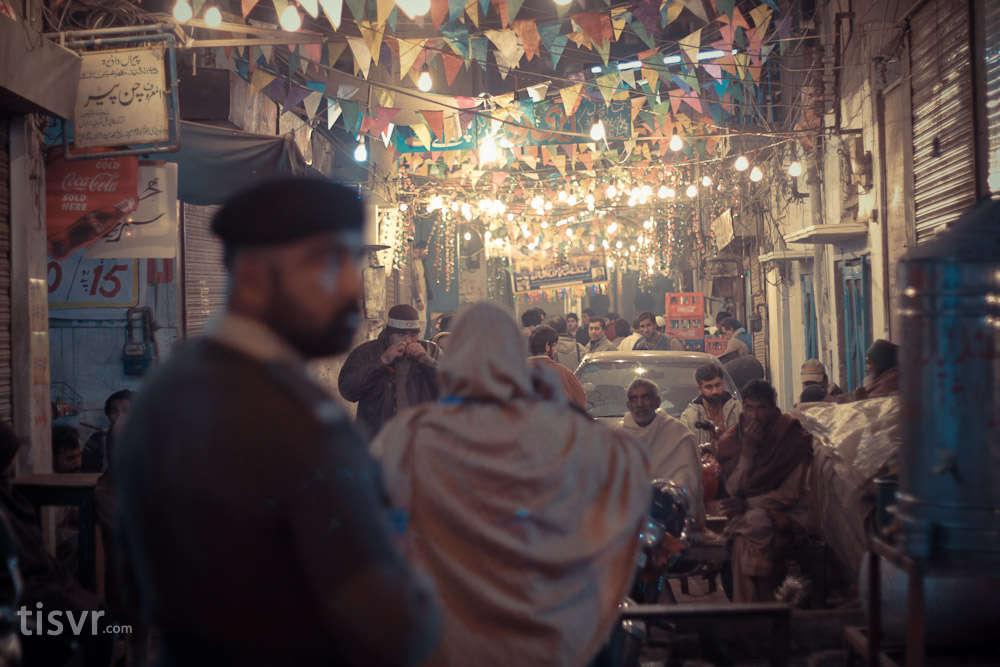 When I moved to Islamabad from Lahore three years ago, I asked around for a good yoga class in the vicinity. I was directed towards a trainer in the posh F-8 sector of the Federal Capital. “It’s four days of Bikram Yoga,” I was told. I quickly signed up and arrived one Monday evening to start my classes.

To my bafflement, it was anything but yoga. It was like any other work out class: weights, crunches, leg exercises and cardio. When I asked the trainer, who had recently arrived from England, she said yoga was only reserved for one day of the week. I would have to wait for Thursdays to practice it. At the end of my first Thursday class, the trainer told us to lie down with our eyes closed and say a loud “O” followed by a “ma” and “mm”. Awkwardly I followed the rest of the class as they chanted a strange “Ooomaammm” mantra. At the end of the class, I went up to the trainer and asked if this concoction of sounds meant anything. She laughed and said, “We used to say Om, which is the correct way of practicing the mantra. It is a spiritually relaxing sound I love to end the class with but too many students complained. They said it sounded too Hindu. Many of them left the class. I had to break the sound up to satisfy the students.”

Later, she told me that she had to reduce the yoga class to once a week for the same reason. Yoga was perceived to be a Hindu practice. Though it had become a fashionable form of exercise once it was appropriated by the West, the students were still uncomfortable with practicing movements associated with Hinduism every day. Once a week, with alterations to the mantras, would help contain the damage. Soon after I joined this class in 2014, Art of Living, an internationally-affiliated yoga centre with its headquarters in Bangalore, was torched in Islamabad. The spiritual leader Sri Sri Ravi Shankar, who runs similar centres around the world, had inaugurated the centre in Islamabad. Though different reasons were put forth for the fate of the centre, it was widely speculated that the reasons it was burnt down was because of its association with yoga, a practice considered un-Islamic.

In a country created on the basis of the two-nation theory, the space for co-existence of non-Muslims, especially Hindus, has increasingly shrunk over the years. Anything associated with Hinduism must be shunned and rejected in the Islamic Republic of Pakistan. The state sees itself in opposition to the enemy lurking across the border. In Pakistan, nationalism has become synonymous with religious belief, for the nation itself was created on the basis of Islamic identity. It is assumed that to be Pakistani is to be Muslim. Religious minorities do not fit in well in this neatly packaged narrative of national identity, nor does non-Muslim heritage or a pre-Islamic past. In school textbooks, history lessons are whitewashed to censor any mention of Hindu heritage and lineage in the region. Mandirs are appropriated as madrassas or homes for migrant communities who arrived at the time of partition, localities that previously held names such as Krishan Nagar are replaced with Muslim names such as Islampura and archaeological sites, meant to stand as historical evidence, are also appropriated by Islam or more neutral religions. For instance, one of oldest Hindu universities, which also served as a temple, in Sharda, Pakistan-administered Kashmir, is only portrayed as a Buddhist site today. It has been purged of its Hindu past, a necessary prerequisite if it is to remain a tourist site for Pakistanis.

Over the past two months, three different schools in Pakistan invited me to speak to students about partition. One school in Mumbai also requested we hold a Skype interaction between school students on both sides of the border amidst heightened India-Pakistan tensions across the Line of Control in Kashmir. It was important to open channels of communication, they said. I asked students on this side if they would like to speak to their Indian counterparts. Some were shy enough to simply nod. Other were more assertive with their opinions. One student, in an upper-income school in Islamabad, outright rejected the invitation. When I asked her why she told me she had read horrible things about Hindus in her history textbooks and had no inclination whatsoever to talk to “them”.

In another school, I kicked off the conversation on partition by asking students if they knew where their grandparents were living in 1947. One fourth-grade student in a high-income school emphatically stated, “My grandfather migrated from India and thank God he did, other wise can you imagine I would be Indian too!” I asked him why that idea frightened him and he said, “Then teacher, don’t you realise I would be Hindu.” For him it was obvious, to be Indian was to be Hindu, to be Pakistani was to be Muslim. And he wasn’t the only one. When the students kept stating that they did not want to talk to any Indians, I tried to break the ice by asking how many of them were Shah Rukh Khan fans. Most of the students jumped out of their chairs to squeal loud ‘yes’s. “But he’s an Indian, so how can you like him?” I challenged. They screamed almost in unison, “Nooo teacher, he’s a Pakistani! He’s Muslim so we can like him.”

I wasn’t surprised. I’ve been running workshops in Indian and Pakistani schools since 2010 and often come across such reactions. In India, many students, in my experience, view their Pakistani counter-parts as terrorists. In Pakistan, students perceive Indians as deceitful infidels. What stood out for me in this particular workshop last week, however, were student reactions when I showed them a video clip of Indian students, full of messages for them. The Indian students had shared their hobbies – sports, video games, Facebook and movies – and had spoken about Indian cuisines and cultures. When I turned the video off and asked the Pakistani students what they thought, the most common reaction was, “But they don’t look Hindu.” Taken aback, I asked, “What does a Hindu look like?” To this I received no straight answer but it seemed like the students already had images in their heads, and they weren’t pretty. We had a debriefing session after and I tried to explain that one cannot look a certain religion, that faith was something personal and internal. We also talked about how a certain nationality does not have to mean a certain religion. Shah Rukh Khan was indeed Indian just as Hindus living in Pakistan were Pakistani.

It was difficult for students to grapple with the idea and it is no easier for adults nor the Pakistani state to come to terms with this. While the state has to be more careful with its words and policies to come off as tolerant and inclusive at a time when more and more fingers are pointed towards Pakistan as a radical and intolerant nation, the students are more vocal. “Hindus should go back,” they said, “India is there country” and “Muslims should come here. Other wise they aren’t true Muslims.”

The nationalism of religious minorities

With rising nationalism premised on religious identity on both sides of the border, both India and Pakistan follow the same line of thought. Religious minorities have to repeatedly justify their Pakistani or Indian-ness. Shah Rukh Khan has had to prove his allegiance to India. Aamir Khan had had to retract his and his wife’s words about fearing the increasing intolerance in India. #GotoPakistan and #antinational have become popular hashtags in the country. In Pakistan, meanwhile, religious minorities are vanguards of patriotism. In the face of the alleged surgical strikes in Pakistan-administered Kashmir in September 2016, it was the Hindu community that came out to protest against Prime Minister Narendra Modi. Gulab Roy, the president of the Hindu Bhail community, stated that, “The Hindu community will stand with the armed forces of the country and will gouge eyes of those who will have bad intentions for Pakistan.” He warned the Indian prime minister that his country will have to “face the worst defeat in history” if his government tried to attack Pakistan.

This act of condemnation was a matter of life and death for the Hindu community in Pakistan. Had they not overtly chosen sides, they would have had to face serious repercussions. History stands as proof of this. After the Babri Masjid demolition in Ayodhya, dozens of temples in Pakistan were attacked. During different points of time, whenever India-Pakistan tensions have intensified, the Hindu community had had to bear the brunt off it, becoming the scapegoats for Indian policies. They are not the only religious community who has had to undergo this. When the French magazine Charlie Hebdo released sketches of the Prophet and the Muslim community came out to protest what they perceived as blasphemous content, it were the Christians in Peshawar that rallied against the cartoons first and foremost. They had learnt their lessons. As anti-American sentiment rose in Pakistan after the ‘war on terror’ and increasing drone attacks, Christians were seen as synonymous with Americans and attacked in the country. After the movie Innocence of Muslims was released in 2012, also perceived as blasphemous, a protest rally set a church in Mardan, Khyber Pukhtoonkhwa, on fire. Several other churches have been bombed and Christians targeted over the years as Muslim retaliation against Americans, and consequently Christians, increased. Religion and nationality are submerged into a potent mix and the ordinary Pakistani is unable to separate the two.

Just last week, a young woman joined the exercise-cum-yoga class I am still a part off. For the first few days, we picked up weights and did ordinary exercises that she fully participated in. But on Thursday, when our trainer asked us to recite the “Oomaamm” mantra, she sat up and stared at us. Quietly, she got up and complained to the manager. “This sounds too much like that Hindu God, Om. Is that what you are teaching here?” My trainer told her she’d remove the mantra altogether if it upset her so much. The consolation did not do much for this woman. She stomped out of class and did not return again. The class was too Hindu and hence too un-Islamic for her.