The foray into politics of the Milli Muslim League party, which is loyal to Hafiz Saeed, is a key step in a military-proposed plan to mainstream militant groups. 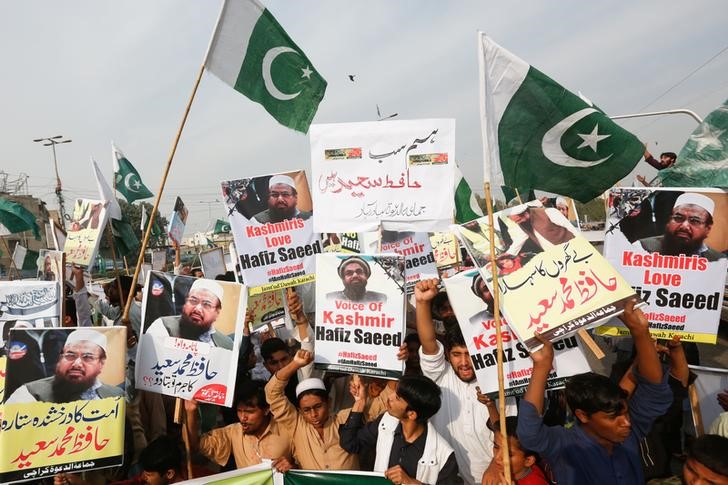 Lahore:  A new Pakistani political party controlled by an Islamist with a $10 million US bounty on his head is backing a candidate in a by-election on Sunday, in what a former senior army officer says is a key step in a military-proposed plan to mainstream militant groups.

The Milli Muslim League party loyal to Hafiz Saeed – who the US and India accuse of masterminding the 2008 Mumbai attacks that killed 166 people – has little chance of seeing its favoured candidate win the seat vacated when Prime Minister Nawaz Sharif was removed from office by the Supreme Court in July.

But the foray into politics by Saeed’s Islamist charity is following a blueprint that Sharif himself rejected when the military proposed it last year, retired Lieutenant General Amjad Shuaib told Reuters.

Three close Sharif confidants with knowledge of the discussions confirmed that Sharif had opposed the “mainstreaming” plan, which senior military figures and some analysts see as a way of steering ultra-religious groups away from violent jihad.

Yaqoob Sheikh, the Lahore candidate for Milli Muslim League, is standing as an independent after the Electoral Commission said the party was not yet legally registered.

But Saeed’s lieutenants, JUD workers and Milli Muslim League officials are running his campaign and portraits of Saeed adorn every poster promoting Sheikh.

Another Islamist designated a terrorist by the United States, Fazlur Rehman Khalil, has told Reuters he too plans to soon form his own party to advocate strict Islamic law.

“God willing, we will come into the mainstream – our country right now needs patriotic people,” Khalil said, vowing to turn Pakistan into a state government by strict Islamic law.

Saeed’s charity and Khalil’s Ansar ul-Umma organisation are both seen by the US as fronts for militant groups the army has been accused of sponsoring. The military denies any policy of encouraging radical groups.

Both Islamist groups deny their political ambitions were engineered by the military. The official army spokesman was not available for comment after queries were sent to the press wing.

Still, hundreds of MML supporters, waving posters of Saeed and demanding his release from house arrest, chanted “Long live Hafiz Saeed! Long live the Pakistan army!” at political rallies during the past week.

“Anyone who is India’s friend is a traitor, a traitor,” went another campaign slogan, a reference to Sharif’s attempts to improve relations with long-time foe India that was a source of tension with the military.

Both Saeed and Khalil are proponents of a strict interpretation of Islam and have a history of supporting violence – each man was reportedly a signatory to al Qaeda leader Osama bin Laden’s 1998 fatwa declaring war on the US.

They have since established religious groups that they say are unconnected to violence, though the US maintains those groups are fronts for funnelling money and fighters to militants targeting India.

Analyst Khaled Ahmed, who has researched Saeed’s Jamaat-ud-Dawa charity and its connections to the military, says the new political party is clearly an attempt by the generals to pursue an alternative to dismantling its militant proxies.

“One thing is the army wants these guys to survive,” Ahmed said. “The other thing is that they want to also balance the politicians who are more and more inclined to normalise relations with India.”

The military’s Inter-Services Intelligence agency first began pushing the political mainstreaming plan in April 2016, according to retired general Shuaib, a former director of the army’s military intelligence wing that is separate from the ISI.

He said the proposal was shared with him in writing by the then-ISI chief, adding that he himself had spoken with Khalil as well as Saeed in an unofficial capacity about the plan.

“Fazlur Rehman Khalil was very positive. Hafiz Saeed was very positive,” Shuaib said. “My conversation with them was just to confirm those things which I had been told by the ISI and other people.”

Saeed has been under house arrest since January at his house in the eastern city of Lahore. The US has offered a $10 million reward for information leading to his conviction over the Mumbai attacks.

Then-prime minister Sharif, however, was strongly against the military’s mainstreaming plan, according to Shuaib and three members of Sharif’s inner circle, including one who was in some of the tense meetings over the issue.

Sharif wanted to completely dismantle groups like JUD. Disagreement on what to do about anti-India proxy fighters was a major source of rancour with the military, according to one of the close Sharif confidants.

In recent weeks several senior figures from the ruling PML-N party have publicly implied that elements of the military – which has run Pakistan for almost half its modern history and previously ousted Sharif in a 1999 coup – had a hand in the court ouster of Sharif, a charge both the army and the court reject.

A representative of the PML-N, which last month replaced him as prime minister with close ally Shahid Khaqi Abbasi, said the party was “not aware” of any mainstreaming plan being brought to the table.

Some analysts worry that mainstreaming such controversial groups would be a risky strategy for Pakistan.

US President Donald Trump’s administration has threatened sanctions against members of Pakistan‘s military and even raised the spectre of declaring Pakistan a state sponsor of terrorism.

“It will send a wrong message,” said analyst Zahid Hussain, who nevertheless thought that Saeed’s new party would have a “negligible” effect on Pakistani elections because religious parties have never won more than a few seats in parliament.

Others are not so sure.

Sheikh, the MML candidate in Sunday’s by-election who says he was handpicked by Hafiz Saeed, vowed to establish strict Islamic rule and “break” liberalism and secularism.

Analyst Ahmed warned that few existing religious parties have a charismatic leader like Saeed, and Pakistan may find itself unable to control a rising tide of Islamist sentiment.