The missile is capable of delivering conventional, high explosive or nuclear warheads up to 290 kms. 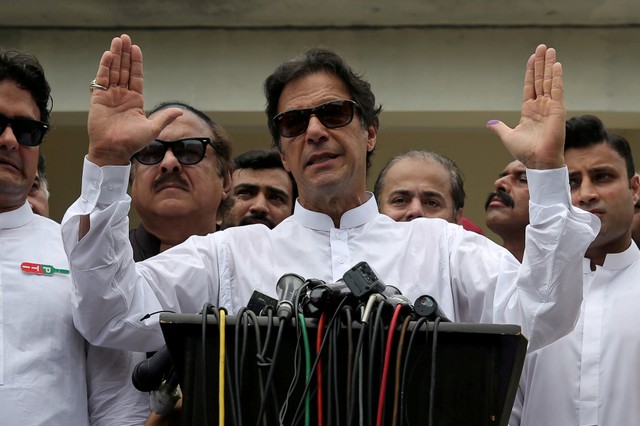 Islamabad: Pakistan has successfully test-fired nuclear-capable surface-to-surface ballistic missile ‘Ghaznavi’ with a range of up to 290 kms, the Army said on Thursday, amid fresh Indo-Pak tensions after India revoked Jammu and Kashmir’s special status.

Pakistan Civil Aviation Authority on Wednesday closed three aviation routes of Karachi airspace till August 31, leading to reports that the Pakistan Army may conduct a missile test from a flight test range in Balochistan.

The Pakistan military’s media spokesperson, Major General Asif Ghafoor on Thursday shared a video of the “night-training launch” of the short range ballistic missile on Twitter.

The Ghaznavi missile is capable of delivering multiple types of warheads up to 290 kms, that could cover parts of India.

According to experts, the Ghaznavi missile could be an improved ‘Scud’ type ballistic missile. The missile’s warhead can be conventional, high explosive (HE) and nuclear.

Maj Gen. Ghafoor said that the Pakistan Chairman Joint Chiefs of Staff Committee (CJCSC) and the three services chiefs congratulated the team of experts for successfully testing the missile. 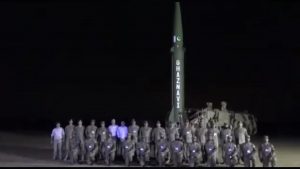 Pakistan Army with the Ghaznavi missile in the background. Photo: Twitter/DGI ISPR

President Arif Alvi and Prime Minister Imran Khan also conveyed their appreciation to the team, and congratulated the nation on the feat, he said.

The nuclear-capable missile was launched amid Pakistan’s efforts to internationalise the Kashmir issue after India abrogated provisions of Article 370 of the Constitution to revoke Jammu and Kashmir’s special status and bifurcated it into two Union Territories.

Prime Minister Khan has repeatedly raised the threat of a nuclear war in the region as a result of India’s decision on Kashmir.

“In a nuclear war, no one will win. It will not only wreak havoc in this region, but the entire world will face consequences. It is now up to the international community,” he said last week in his address to the nation on the Kashmir issue.

Pakistan expelled the Indian High Commissioner after it downgraded the diplomatic ties with India in protest to India’s decision to end Jammu and Kashmir’s special status.

Pakistan also suspended its trade with India and stopped the cross-border train and bus services.

Prime Minister Khan once again raised the nuclear capabilities of the neighbours, saying there are no winners in a nuclear war.

Earlier in May, Pakistan conducted a successful training launch of Shaheen-II, a surface-to-surface ballistic missile.