Old, Vulnerable at Risk in Puerto Rico Due to Maria Power Outage

The old and those in need of care have seen their problems multiply since Maria shattered basic infrastructure across the US island. 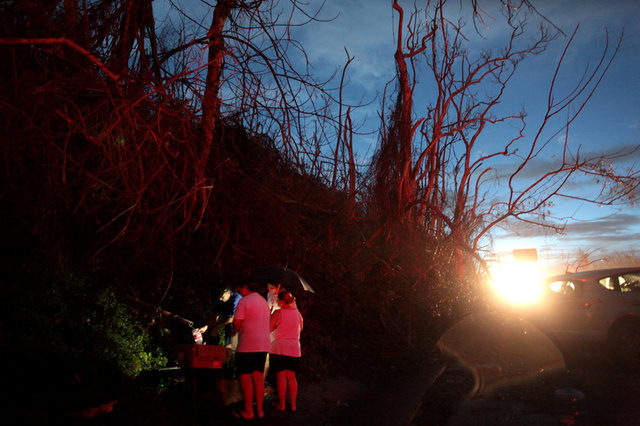 Mayaguez, Puerto Rico: Few people in Puerto Rico have suffered more from the devastation of Hurricane Maria than the elderly and the infirm.

Isolated from their families due to phone blackouts, short of fuel and water and at the mercy of nationwide power cuts, the old and those in need of care have seen their problems multiply since Maria shattered basic infrastructure across the US island.

Elevators, dialysis machines and a host of life-saving medical devices no longer offer the same guarantees because rationing of resources has forced hundreds and thousands of people to adjust to days whose effective span falls well short of 24 hours.

Hooked up to a ventilator during the day, Adeline Vazquez needs an artificial oxygen supply to cope with severe respiratory problems, but her building in the western city of Mayaguez does not have the fuel to run a generator 24 hours.

“I’m a ticking time bomb on the verge of exploding,” the 53-year-old said with a laugh as she rasped through the ventilator in a housing block she shares with about 60 other people.

Federal and municipal authorities have vowed to step up distribution of essential supplies, but long lines for fuel and cash still snaked around main roads of the city on Friday.

Every night since Maria downed power cables across the island of 3.4 million people, Vazquez has faced the possibility of running out of oxygen when the electricity goes off in her building after 10 pm.

“The electricity needs to come back on,” she said on a bed beneath two still fans and sign reading “loving you” on the wall. “Then I could have the machine to let me breathe. Because the worry is you’ll end up like a fish that jumps out of the fish tank. It’s like crossing the Niagara by bicycle every day.”

One floor down from Vazquez, Santos Medina rested his head on his left hand as he sat in a rusted wheelchair, empty medicine vials strewn on the table at his elbow. Legally blind and suffering from diabetes and hepatitis B, he has had both legs amputated in the last two years

Medina, 64, said he needed kidney dialysis three times a week. After Maria, he failed to go for treatment for an entire week for the first time, in part because it had become exhausting and too difficult.

Water shortages were interfering with dialysis and forced the local hospital to pare back the time it could provide it, he said, and fuel bottlenecks had made it harder to get buses to see specialists.

Since Maria killed phone lines, Medina had not had contact with his sister Josefa, who lives about 30 minutes away.

“We have no idea what is going on, no kind of information,” he said. “Nothing.”

Downstairs, residents asked for news and were eager to hear how the US  media was portraying the island’s plight.

“We’re stranded here,” said Rosario Morales, 65. “No one (from the government) has come to give us any aid. Not even to know if we’re alive here.”

Nevertheless, there were some signs of progress in Mayaguez. In contrast to the capital San Juan, several sets of traffic lights were working again on the outskirts of town.

One Mayaguez retirement home had even managed to turn off its diesel generator and was being supplied by the state power utility, said building administrator Edward Silva.

“We’ve had 24 hours without interruption,” he said.

Maria‘s heavy rains brought flooding that damaged the 13-storey building’s lifts, creating problems for residents to get downstairs, said one of them, Maria Dolores Mattei.

Mattei, 70, had been stranded in Houston several weeks ago by Hurricane Harvey. After four flight cancellations, she got a ticket to Fort Lauderdale just as Hurricane Irma hit Florida, and her flight was diverted again.

Then came Maria, which still rattles residents whenever the wind and the rain whip up outside the home, she said.

“It was horrible,” Mattei said. “I don’t even want to think about it.”