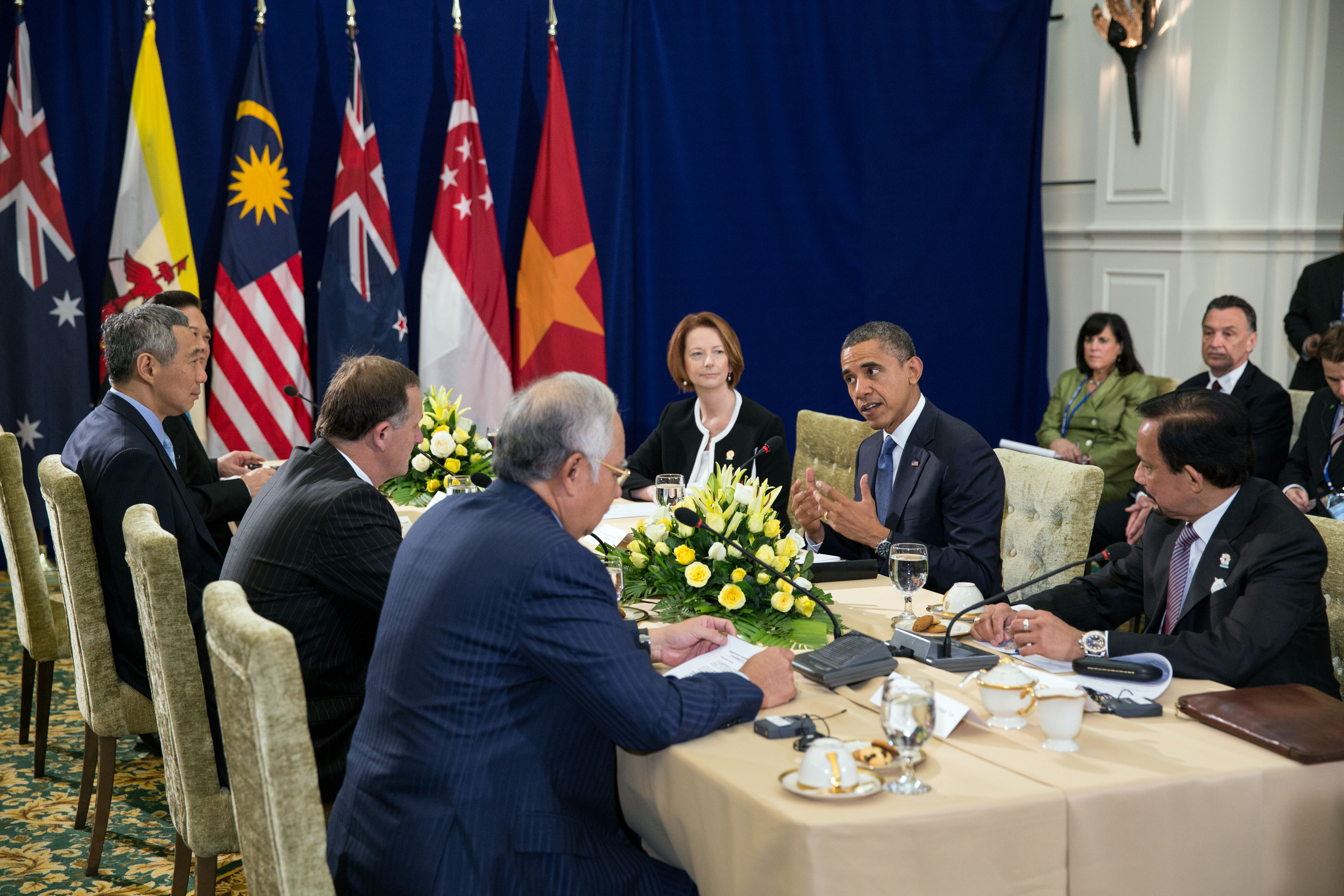 President Barack Obama attends the Trans-Pacific Partnership (TPP) meeting at the ASEAN Summit at Peace Palace in Phnom Penh, Cambodia, Nov. 20, 2012. Taking part in the meeting, clockwise from the President, are; Sultan of Brunei Hassanal Bolkiah; Prime Minister Mohammed Najib Abdul Razak of Malaysia; Prime Minister John Key of New Zealand; Prime Minister Lee Hsien Loong of Singapore; Prime Minister Nguyen Tan Dung of Vietnam; and Prime Minister Julia Gillard of Australia. Credit: Official White House Photo by Pete Souza This official White House photograph is being made available only for publication by news organizations and/or for personal use printing by the subject(s) of the photograph. The photograph may not be manipulated in any way and may not be used in commercial or political materials, advertisements, emails, products, promotions that in any way suggests approval or endorsement of the President, the First Family, or the White House.Ê

Barack Obama wants to leave behind three big trade liberalising deals as his legacy. He is moving well in that direction. On Monday, as 12 countries — from Canada and Chile to Japan and Australia — reached a deal on the Trans-Pacific Partnership (TPP), which will have huge economic implications for the global economy, the US President claimed it was a turning point for “our farmers, ranchers and manufacturers”. In Obama’s view, TPP will bring other benefits too. “It includes the strongest commitments on labour and the environment of any trade agreement in history, and those commitments are enforceable, unlike in past agreements,” Obama said in a statement on Monday.

That was a tall claim. A false promise.

For Obama, who will soon enter the last year of his last term in office, the TPP could be a high point of his presidency as it would create the world’s largest trade bloc linking 40% of the world’s economy in a web of rules governing Pacific commerce. But the way this pact has been negotiated by the 12 countries – in complete secrecy with the public kept in the dark, while big corporate lobbies were allowed to see and play with the text – has prompted critics to call it a neo-liberal assault on fair trade, internet freedom and a sell-out to big business. And with China and India, the two fastest growing Asian economies kept out of it, the TPP could trigger a trade war in which the only winners would be US corporations.

Though the TPP process started in 2008 and the leaders of the nine TPP countries – US, Australia, Brunei, Chile, Malaysia, New Zealand, Peru, Singapore and Vietnam announced the broad outlines of an agreement on November 12, 2011, the ordinary people of these countries did not hear anything concrete except terms like “next-generation” agreement, “job creation” and a “boost to exports”.

The devil in the details has remained hidden from the people.

The lid on secretive process was blown a bit in July, when WikiLeaks released a secret letter from the TPP Ministerial Meeting held in December 2013. The letter was nothing short of a scandal. It showed that the TPP partners, under pressure from the US, were discussing wide-ranging privatisation and globalisation strategies with the aim of severely restricting state-owned enterprises and even allowing countries to be sued by other TPP partners or by private companies if they departed from the pact’s strictures. In a commentary on the leaked letter, WikiLeaks editor Julian Assange, said: “The TPP erects a ‘one size fits all’ economic system designed to advantage the largest transnational corporations. In this leak we see the radical effects the TPP will have, not only on developing countries, but on states very close to the centre of the Western system. If we are to restructure our societies into an ultra-neoliberal legal and economic bloc that will last for the next 50 years then this should be said openly and debated.”

But even as activists in the 12 partner countries and other parts of the world created a storm of protest against the deal following the leak, Obama continued to push his mega-treaty package, which also includes the Transatlantic Trade and Investment Partnership (TTIP) with the European Union and the Trade in Services Agreement (TiSA). Together, the three treaties, when operational, would encompass more than two-thirds of global GDP. All three pacts are being discussed in secret.

Soon after its expose on TPP, WikiLeaks also published a secret “core text” related to TTIP, the agreement being negotiated behind closed doors between the US, EU and 23 other countries, and TiSA, which is the largest component of the three deals. The leaked documents about TTIP and TiSA revealed that the agreements undermined the roles of governments and local businesses and gave enormous powers to multinational companies.

Despite these scandalous revelations, the TPP partners reached a deal on Monday. Now, they all need to get a formal approval from their parliaments to make it pact. But it is still not clear when and how experts and the public will be able to access and analyse the text of the deal. Though Obama has promised to release the text for public scrutiny 60 days before a final vote in Congress, it may not happen until the next year.

TPP FAQs
The Trans-Pacific Partnership (TPP), which has been negotiated in secret since 2008, is the biggest trade pact of our times. Here is why it matters to us all: Which countries are part of TPP?

Australia, Brunei, Canada, Chile, Japan, Malaysia, Mexico, New Zealand, Peru, Singapore, the US and Vietnam are the current members. They’re responsible for 40% of the world’s GDP and 26% of the world’s trade. More countries in the Pacific region may join down the line.

What is TPP all about?

It’s a trade deal, covering everything from internet use to pharmaceuticals and banking to milk. The deal will integrate these countries into a trade bloc for free movement of goods and services. It will strengthen American ties with the economies of the region.

Why is the US leading TPP negotiations?

It will help the US to advance its economic interests in the critical Asia-Pacific region. It will also give a boost to American exports to other member countries, which together form a large market. The US also wants to curb China’s influence in this region.

Who are the biggest supporters of this agreement?

Big US corporations support the agreement because it would reduce the tariffs on the products they produce overseas and then ship to the US. They argue free trade will benefit US companies and create more jobs at home.

Who is protesting against this deal?

Internet freedom activists, workers unions and environmental groups oppose the trade deal. They say this pact will curb freedom and benefit only big corporations at the cost of workers, local businesses and environment.

Why are people worried about the deal?

The text of the agreement is secret. All negotiations have been done in secret.

Why is China not part of it?

The deal could be part of the US ‘Pivot to Asia’ to tackle China’s dominance in the region. But China has its own trade plans for the region. It could also one day join TPP.

Activists suspect the reason why Obama and leaders of leading TPP countries like Japan and Australia have been so tight-lipped about the whole agreement is because they have a lot to hide, especially the points which may have global ramifications.

In his analysis of the leaked TPP letter, Assange had written that its intellectual property regime “would trample over individual rights and free expression, as well as ride roughshod over the intellectual and creative commons. If you read, write, publish, think, listen, dance, sing or invent; if you farm or consume food; if you’re ill now or might one day be ill, the TPP has you in its crosshairs.”

On Monday, soon after the deal was reached in Atlanta, internet activists immediately raised red flags. “Internet users around the world should be very concerned about this ultra-secret pact,” OpenMedia’s Digital Rights Specialist Meghan Sali said in a statement on his website. “What we’re talking about here is global Internet censorship. It will criminalise our online activities, censor the Web, and cost everyday users money. This deal would never pass with the whole world watching – that’s why they’ve negotiated it in total secrecy.”

Even as the TPP’s final text remains secret, activists have long suspected and complained that in addition to curbing internet freedom, the pact will also back big pharmaceuticals firms at the cost of state-owned enterprises and promote big US textile corporations by damaging small entrepreneurs in Asian nations.

But a relentless campaign against undermining free speech online and strong arguments by senior American economists that the pact will only favour big business and not American workers or secure better conditions for workers overseas failed to deter Obama from his pet project in his second term. On May 14, despite some resistance from his own Democratic Party members, Obama managed to get the Congressional green light to press for final agreement on the TPP and TTIP with the active support of top Republicans. Even as Obama was gloating over getting “fast tracking” rights for TPP, which basically means the passage of the accord through the Congress without having its contents available for debate or amendments, The Guardian ran an expose, showing Obama got the go-ahead from the Congress “after lots of corporate money exchanged hands with senators”. In a detailed investigation on how the US Senate and House passed Trade Promotion Authority (TPA) – the fast-tracking bill, the paper revealed how it was achieved following “months of behind-the-scenes wheeling and dealing by the world’s most well-heeled multinational corporations with just a handful of holdouts.”

TPP is not just secretive. It’s being achieved through very dubious means.

When and if this accord becomes operational, activists say, it will change the way we live and work. “TPP is a deal for big business,” Nick Dearden, director of the UK-based Nick Dearden, Global Justice Now told Alter Net on Monday. “Two fifths of the global economy will be covered by corporate courts, meaning a huge rise in governments being sued for protecting the public interest from corporate greed,” Dearden told Alter Net, explaining how under the TPP deal, multinational companies will be able to sue governments over allegations that profits were lost due to local regulations.

For American corporations, whose philosophy is based on unfettered access to markets and resources around the world, the TPP is a great victory. For everyone else, it’s a big blow. With TTIP and TiSA too in the pipeline, Obama may just leave behind a legacy of unfair trade and the wide-spread curbing of freedoms and rights.