Bhutan is hoping to get a green light from the RBI next week on exchanging demonetised notes, while Nepal is still to start collecting the Rs 500 and Rs 1000 notes. 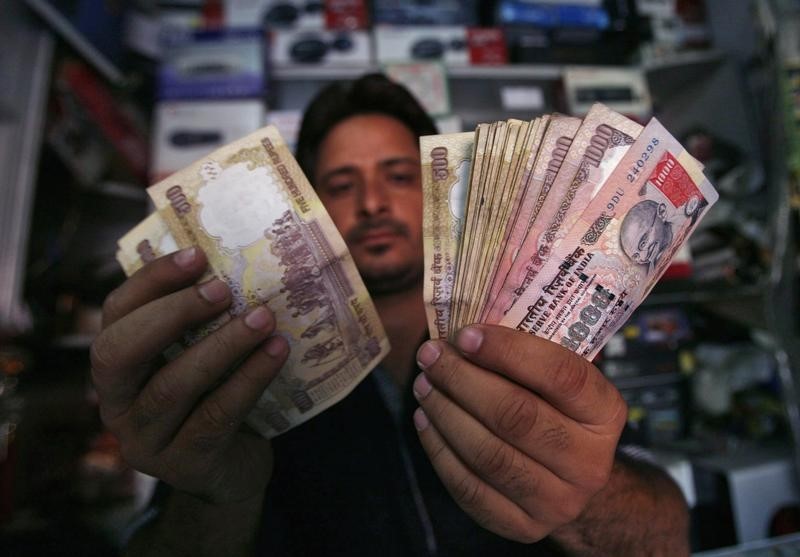 A shopkeeper poses for a picture as he counts rupees at his shop in Jammu. Credit: Reuters/Files 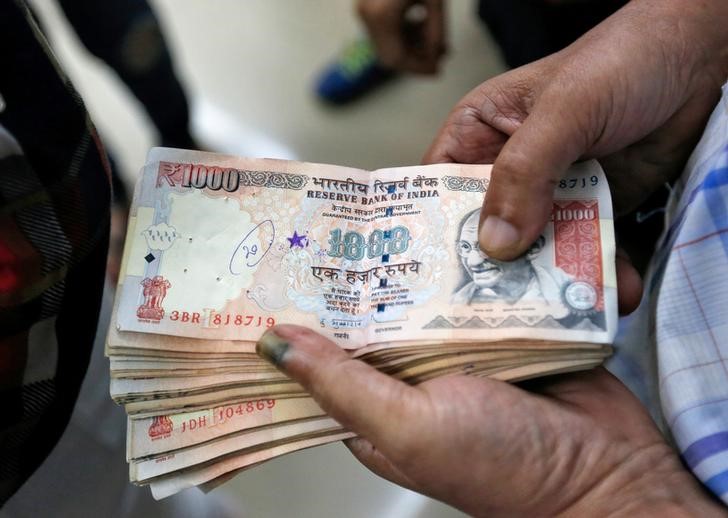 New Delhi: Two months after the Modi government announced the demonetisation of high-value notes, India’s Himalayan neighbours continue to look toward it for guidance on how to quickly restore normalcy in their economies.

The Nepali and Bhutanese economies both depend to a great extent on the Indian rupee, which makes up a significant percentage of both countries’ foreign exchange stock. Indian rupees are also officially used in Bhutan, while in Nepal they are commonly used at the retail level.

Bhutan’s central bank, Royal Monetary Authority (RMA), which has sucked out of all the Indian rupees in its system, is hoping to get a green light from the RBI next week on exchanging demonetised notes worth roughly Rs 168 crore. Nepal, on the other hand, is still to start collecting Rs 500 and Rs 1000 notes, with RBI officials meeting their Nepali counterparts on Thursday for the first time.

When Prime Minister Narendra Modi announced on November 8 that Indian rupee notes of Rs 500 and Rs 1000 would be withdrawn, telephones began to ring across Kathmandu and Thimpu as leaders and officials tried to grasp the impact of this drastic move by their biggest trading partner.

Bhutan’s Ngultrum is pegged to the Indian rupee on a one-on-one basis, which means that the currency is officially transacted throughout the country. Therefore, India had an obligation to assist Bhutan to keep its economy on an even keel during this phase.

In Nepal, the usage of Indian currency is not allowed under law, but it is commonly transacted at the retail level. At the same time, India permitted travellers to Nepal to carry Rs 500 and Rs 1000 notes with a value limit of Rs 25,000. This new rule was notified a few weeks after Modi announced this move during his first trip to Nepal in November 2014. This mean that India had a responsibility to accept the old high-value notes that it allowed to circulate within Nepal.

A few days after demonetisation, Nepal stopped all transactions in Indian currency across the board – as it awaited directions from the Indian central bank on how to deal with the demonetised Indian currency in circulation. Nepali Prime Minster Pushpa Kamal Dahal even called up Modi to nudge the process along.

Late November, India formed an inter-ministerial committee, headed by the finance ministry and including an official from the external affairs ministry, to find solutions to questions arising from demonetisation that had an extra-territorial component.

Recently, the finance ministry allowed NRIs more time, until March 31, to deposit their old Indian currency notes with the RBI and also a relaxation in withdrawal limits for foreign diplomats. But, the government had still not announced any special decisions for India’s closest neighbours.

The meeting on Thursday between the deputy governor of the Nepal Rashtra Bank (NRB), Chintamani Siwakoti, who flew into New Delhi, and a two-member RBI delegation was, therefore, essential to kick-start the process. This was their first face-to-face discussion since November 8.

As per Nepali media reports, the NRB delegation had a wish list, which included the provision of an exchange facility for Nepali citizens to exchange old notes up to Rs 25,000 and restarting the regular supply of Indian currency to Nepal’s central bank.

The Wire has learnt that from the Indian side, the meeting was more of a preliminary one convened to impart assurance to the NRB that their concerns would be met. RBI officials were keen to understand the procedures in the Nepali banking industry – for instance, the robustness of the KYC process.

More rounds of discussions may have to be held before the RBI has enough conviction to draw up a time plan to allow Nepali banks to start collecting the demonetised notes. Consequently, no announcement is likely this month about the start of the window for depositing old Indian notes for Nepali citizens

The cautious approach is being taken due to Indian concerns about the availability of fake Indian currency and possibility of ‘black money’ travelling from India into Nepal. According to observers, the window of deposit of old Indian currency by Nepali citizen would likely be a short one, ranging from a week to 10 days.

With India being Nepal’s largest trade partner, there has been a lot of anxiety in Kathmandu about the impact of Indian demonetisation on its economy, which is emerging from a devastating quake and border ‘blockade’. A drop in remittances from a large number of Nepali seasonal workers who work in India and sustain many remote Nepali villages is anticipated. Nepali citizens along the long open border with India were hit badly. There has apparently been a sharp rise in gold smuggling, which Nepal authorities are claiming is a side-effect of Indian demonetisation.

Five weeks after demonetisation began, a report by the research wing of Fitch Rating Agency had downgraded the outlook for Nepal’s economic growth from 2.5%to 2.2% for the fiscal year till July 2017.

In its Global Economic Prospects report, the World Bank rued that India could lose its appetite for a faster pace of other economic reforms due to the “challenges” faced during demonetisation. It then added, “Spillovers from India to Nepal and Bhutan, through trade and remittances channels, could also negatively impact growth to these neighbouring smaller economies.”

While Nepal is awaiting the go-ahead to collect the demonetised notes, Bhutan’s central bank took a more pro-active approach by announcing steps within a day to collect the old Indian currency in its banks until December 15. A cap of Rs 10,000 in a month was set by the RMA for the withdrawal of Indian rupees. This limit was halved to Rs 5000 within two weeks, after the RMA began to run out of Indian currency notes in the Rs 100 denomination. The deadline for depositing the old notes was also further shortened till November 30 to “avoid risk of this facility being misused”.

Speaking to The Wire, RMA governor Dasho Penjore noted that there had been a shortage of Indian currency in Bhutan, as the RBI was unable to supply cash as per the demand.

At the same time, Penjore also praised the RBI for going out of its way to assist the RMA. “They have wholeheartedly helped us. We cannot put too much on them also as they have their domestic obligations too”.

After the domestic deadline, the total amount of Indian rupee notes deposited by Bhutanese nationals was Rs 1.68 billion (Rs 168 crore), as per the RMA.

“We have already deposited the collected amount with SBI (State Bank of India) Hasimara branch (in West Bengal),”P enjore said.

“We are now awaiting the green signal from the RBI to provide us with the counter value,” he said, adding, “Hopefully, next week”. All the cash had been checked for its veracity, with extensive details of all depositors

Once the equivalent amount in Indian rupees is injected into Bhutanese banks, Penjore said that the withdrawal limits would be lifted. “We hope to have normalised the situation by end of this month,” he stated.

Penjore claied that there was not much of an impact on bilateral trade, as “90% of transactions were done through electronic channels”.

But, there were still a “lot of inconvenience,” he admitted, especially for pilgrims, farmers and traders. With Dalai Lama leading the Kalchakra initiation this month, there were a larger number of Bhutanese making the pilgrimage this year, which had increased the demand for Indian rupees. Bhutanese newspaper Kuensel reported that Indian rupees were being sold at the Indo-Bhutan border to pilgrims, travel agents and exporters at a rate of Ngultrum 108-120 for every 100 rupees.

“If the demonetisation had taken place in summer, rather than in winter, then much of the problems would not have arisen. This is the season for pilgrims and harvests,” he said.

Penjore specifically pointed out to the distress of farmers of Bhutan’s famed citrus fruit. “Our orange farmers have not been happy”. Bhutanese Farmers of orange, and agricultural products like cardamom and potato, complained of not being able to have enough Indian rupees to pay Indian truckers, even as there was a decrease in Indian traders also offering to purchase their perishable merchandise. Prices have declined sharply by 20% to 50%, with The Bhutanese reporting that Food Corporation of Bhutan stopped auction of potatoes for at least two weeks due to low rates.

“Yes, the farmers have faced a lot of inconvenience… not getting payments. But, it is temporary. If RBI responds to the (demand) for de-freezing of the accounts in the next two to three weeks, then it will be okay,” Penjore said.

From November 19, the RMA had order all banks to stop the withdrawal of Ngultrums in exchange for deposit of demonetised Indian rupee notes.

In the last week of December, the Association of Bhutanese Industries requested the RMA to defreeze the Indian rupee accounts of business houses, so that they are able to withdraw in local currency till the cash shortage eased.

With the Indian rupee accounts frozen, Bhutanese business houses are not able to pay for the transportation of goods to and fro India and hire Indian daily wage workers. This has also impacted the sourcing of raw material, since most of it has to be bought in India.

But, it doesn’t seem likely that there will be much relief until there is a large consignment of rupees from India.