A democratic Myanmar may not naturally move closer to the West, as Suu Kyi and the military reverse roles in addressing the imbalances in their relations with Beijing and Washington, respectively. 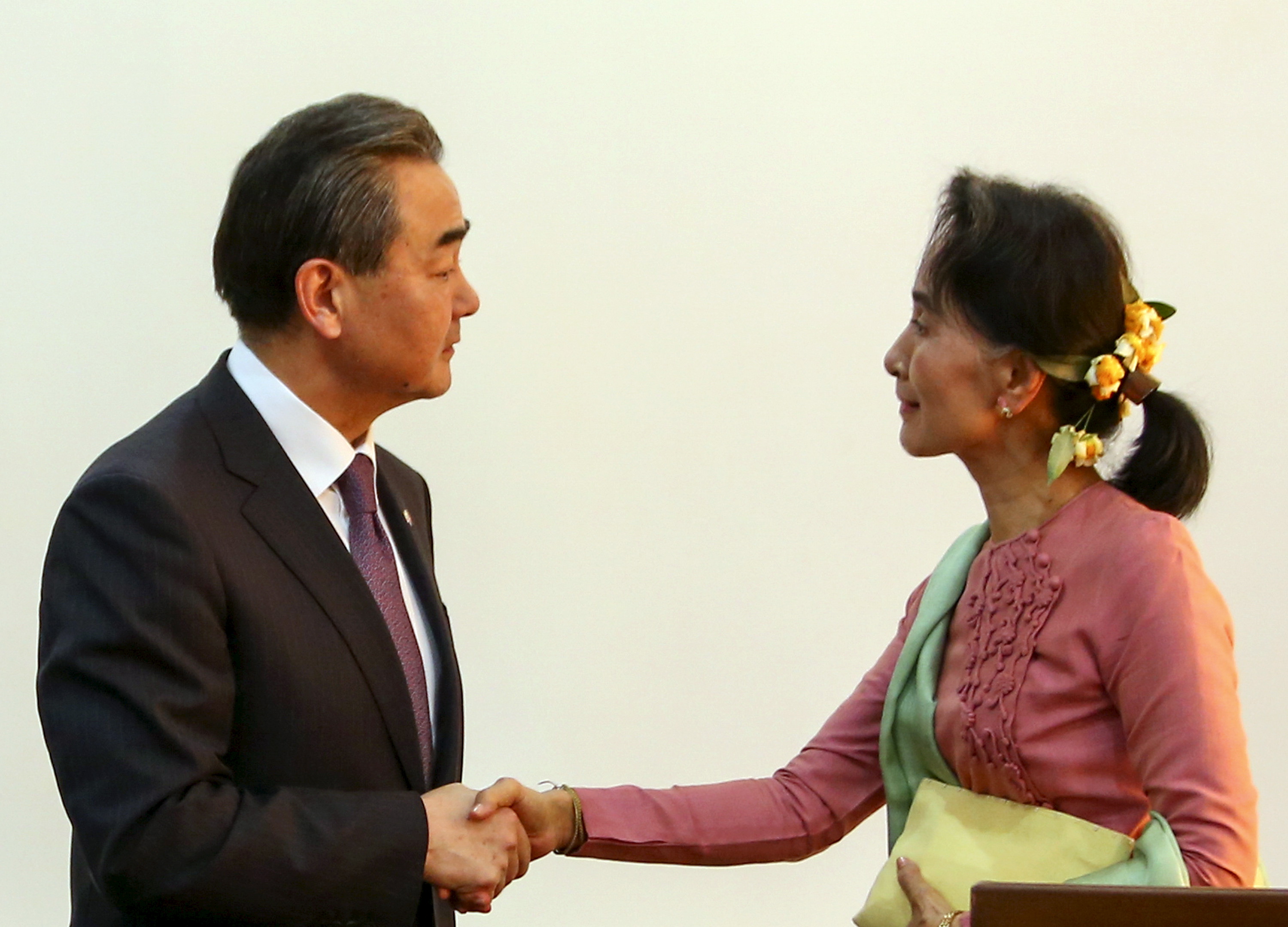 As the Aung San Suu Kyi-led National League for Democracy (NLD) begins its period in office in Myanmar, there is immense interest and curiosity over how the new leadership’s foreign policy will play out. Since reforms were initiated in 2011 under the outgoing military-backed government, a dominant trend of the country’s external relations has been the opening up to the West and the gradual reduction of dependence on China. Will this trend continue under the new leadership?

For a long time Beijing steadfastly stood behind Myanmar’s military junta and refused to engage the pro-democracy forces. On the other hand, Washington isolated the military regime and supported the pro-democracy forces led by Suu Kyi. Today, these relationships are changing and will have an impact on the country’s relations with these two major powers.  China is ever more willing to bet on Suu Kyi as it is no longer sure about the Tatmadaw (i.e. the Myanmar armed forces) – which has been showing an increasing willingness to engage the West, particularly the US. With long-term strategic interests in the country and beyond, Beijing’s pragmatism is guiding its policy of being on the winner’s side. That is why it is reaching out to different political forces in the new democratic Myanmar.

On its part, Washington wants to seize the opportunity to pull the Tatmadaw away from China’s ambit and towards itself at a time when it is looking for new partners in the Indo-Pacific region to bolter its “pivot” strategy. Even as Beijing and Washington seem to have worked out their calculations vis-à-vis Myanmar, the direction and degree of their engagements with the south-east Asian nation will be shaped not only by their interests, but also by internal developments there.

That Myanmar’s foreign policy will follow the current trend is uncertain as a host of issues and tradeoffs between the new NLD government and China, and between the Tatmadaw and Washington, will influence each of these relationships. Inversely, the extent and nature of the new government’s relationships with the two major powers may also emerge as a source of tension between the NLD administration and the Tatmadaw.

After months of speculation on who will be the new president of Myanmar, the new parliament elected NLD nominee U Htin Kyaw, a close aide and confidant of Suu Kyi, to the top post. Notwithstanding the fact that Myanmar’s efforts to diversify its foreign engagements with the international community will continue under the NLD government, the most critical foreign policy challenge of the new government will be how it balances China and the US at a time when their rivalry is intensifying in the region.

The balancing will manifest itself  in more ways than one. Contrary to the popular view that a democratic Myanmar will naturally move closer to the West, Myanmar’s complex political dynamics, may produce surprises as Suu Kyi and the Tatmadaw reverse roles in addressing the imbalances in their relations with Beijing and Washington, respectively.

So far, Suu Kyi has not made any formal foreign policy pronouncement – we have only media interviews to go by in understanding her orientation. When asked about what her government’s foreign policy would be, she has often replied by praising Myanmar’s “non-aligned” principle and insisting that her party will maintain “friendly relations with all countries.” By adhering to this long-standing principle of “neutrality” in foreign policy Suu Kyi has been sending out the message that her government will try to build strong relations with all major global powers. But this is easier said than done.

Suu Kyi has been barred from assuming the presidency due to a provision in the constitution, but the fact that she is state-counsellor designate and minister of foreign affairs clearly suggests that she will be the key driver in foreign policy making. Suu Kyi interacts frequently with Western dignitaries. However, it is not clear if she accepts every suggestion coming from the West. She knows she has to build ties with regional actors, particularly Myanmar’s northern neighbour – China.

Her first visit to China in June 2015 at the invitation of the Chinese government was clearly a move to pave the way for building relations between her party and Beijing. In an exclusive interview to Xinhua soon after the November elections, Suu Kyi reportedly said that Myanmar under her party leadership will continue to adopt a friendly foreign policy with all countries including China and emphasised the importance of good relations with neighbours. In another interview to The Washington Post during the same period, Suu Kyi said that her country’s relationship with China was “good”. She refused to give credit to the US alone for the democratisation process in Myanmar.

Ever since 2012, when Suu Kyi entered parliament, her position on China has been politically correct – whether in welcoming investments from China or avoiding speaking out for her fellow Nobel laureate, Chinese dissident Liu Xiaobo. With the incoming NLD government in Naypyitaw, Beijing is showing renewed confidence about working with the new administration. Earlier this month, Chinese foreign minister Wang Yi said that China would like to resume negotiations over the suspended Myitsone dam. On its part, recent NLD statements suggest that it is open to reconsidering the project by looking at the possibility of redesigning or relocating the dam.

As Suu Kyi builds ties with Beijing, the military is keen to improve its relations with the West, particularly the US. From its point of view, the imperative for political reforms was as much to address the county’s internal socio-political and economic issues as it was to regain a key foreign policy principle of the country – a balanced foreign policy. To a great extent, the Tatmadaw has been successful in achieving this goal. Myanmar-China ties have witnessed a decline in the post-reform period that saw the suspension of Chinese mega-projects, and a sharp downturn in Chinese investments in Myanmar. Myanmar’s handling of ethnic conflicts along Sino-Myanmar border have also angered Beijing.

There is a tendency to view the Burmese military as though it is only now engaging the outside world, forgetting the fact that the Tatmadaw had ruled the country for almost five decades and has the experience of dealing with different major players including the US from where it used to receive military assistance both in equipment and training.

Much before Suu Kyi entered politics and emerged as an international democracy icon, the Tatmadaw had military-to-military ties with the US.  Things changed in 1988 when the US imposed an arms embargo on Burma in response to the brutal suppression of the pro-democracy uprising that year. Washington is aware that it has an edge over China to draw the Tatmadaw towards its side through defence ties knowing that the Burmese military prefers US equipment.

Despite the Tatmadaw’s growing ties with the West, the outgoing military-backed regime also seemed to be trying to keep its relations with Beijing right. In December last year, the government awarded contracts to develop the Kyaukphyu Special Economic Zone and a deep sea port in Rakhine state to Citic Group, China’s largest state conglomerate, after delaying the decision for almost a year.

This was despite voices from civil society groups and the NLD urging that the decision be left to the new government. The NLD has said that it will review major economic projects awarded by the outgoing military-backed government. Should the incoming government go ahead and review a Chinese project, however, this may become a bone of contention between the NLD government and the Tatmadaw and will also affect its relations with China.

Some long-standing internal problems will also impact the new government’s relations with China and Washington. With growing engagement between the NLD and Beijing, an issue that will sooner or later bring the two face-to-face is the security situation relating to several ethnic armed groups along the Sino-Myanmar border. According to media reports Myanmar’s military officers and Yunnan’s intelligence officers think that Suu Kyi’s civilian government and Beijing may enter into a deal to ensure Myanmar’s ethnic conflicts are brought to some resolution with China’s cooperation. Though this is easier said than done, any such move will trouble the Tatmadaw – which would see it as as a case of civilians stepping on turf that the Tatmadaw has long considered its own.

On the other hand, how the Suu Kyi government handles the Rohingya – the minority Muslim community whose treatment by the outgoing military-backed government has been denounced by the UN and several countries – also has the potential of complicating the new government’s relations with the US. Suu Kyi’s silence on the sufferings of the Rohingya has been criticised by civil rights groups. If the new government is unable to bring about a real improvement in the conditions of the Rohingyas, it may invite criticism from the international community. This will embolden those in the US who want the continuation of sanctions on Myanmar and may become a source of tension between the NLD administration and Washington, to the advantage of Beijing.

Another issue that is likely to complicate matters is the increasing regional sensitivity to China’s rising clout. As other Southeast East Asian nations remain wary of China’s assertiveness, particularly in the South China Sea dispute, this will be an area of concern for the new NLD government too. Also as the US elections unfold, the election of a Republican or a Democrat to the White House may not be a major concern for the NLD government since Suu Kyi has personal connections in both the parties. For the Tatmadaw, however, a Republican president may be a worry since its re-engagement with the US began with Democratic front-runner, Hillary Clinton, whom they will be more comfortable dealing with.

Soon after the Thein Sein government assumed office in March 2011, the first foreign dignitary to visit the country was from China, a gesture Beijing just repeated by sending foreign minister Wang Yi to Naypyitaw double quick. As Myanmar recalibrates its foreign policy, moving too close to one side is not an option. How effectively the country uses its relations with other major regional players such as Japan, India, Korea and ASEAN will give more strategic room for it to manoeuvre.

The author is a Fellow at the Observer Research Foundation, New Delhi.