Human Rights Watch interviewed over 50 Rohingya refugees who had fled to Bangladesh, who recounted harrowing tales of fleeing violence. 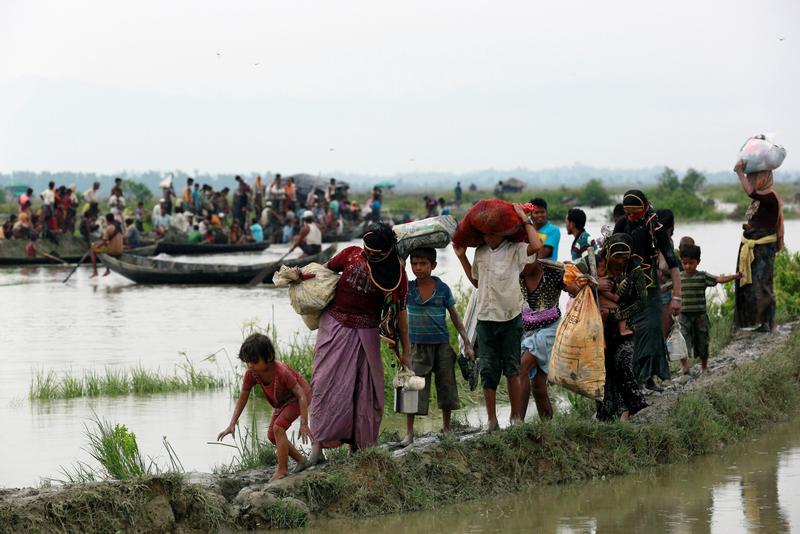 Rohingya refugees walk on a muddy path as others travel on a boat after crossing the Bangladesh-Myanmar border, in Teknaf, Bangladesh, September 6, 2017. Credit: Reuters

New Delhi: “I remember army helicopters, olive green in color, flying around. I was standing on the other side of a canal, watching all this happen directly across from me. I was very close and saw it all myself. The soldiers were using guns that shoot fire, or something that explodes and sets fire”, 26-year-old Mohammad Yunus describes the attack on his neighbouring village of Falinga Ziri in Myanmar’s Rakhine State.

The village of Sikadir Para in Tat U Chaung village tract – where Yunus lived – was attacked on August 26 by over 250 soldiers.

Yunus told Human Rights Watch (HRW) that he saw about 25-30 houses set on fire in Falinga Kiri from his vantage point. He said that at the time of the attack, it looked to him like there were no villagers left; they had all fled. Yunus and others from his village quickly decided to flee as well. The next day, August 27, as they were heading toward shelter in the neighbouring hills, he saw soldiers and police shooting at the fleeing villagers. He learned later that one woman had been killed.

This is just one among many accounts of Rohingya Muslims who have been forced to flee after the Myanmar army launched renewed attacks against the community, in what the HRW has described as an “ethnic cleansing” campaign. The country’s de-facto leader Aung San Suu Kyi has continued to deny there is any ethnic cleansing, despite widespread reports of abuses.

The latest spate of violence erupted in Rakhine State on August 25 after alleged Rohingya insurgents attacked several police posts, triggering a counter-offensive by the military that resulted in the death of at least 400 people.

Rakhine, the poorest region in Myanmar, is home to more than a million Rohingya. They have faced decades of persecution in the Buddhist-majority country, where they are not considered citizens. Soldiers and armed residents have been accused of carrying out a killing spree against Rohingya Muslim men, women and children, forcing them to make an escape into Bangladesh.

In early September, the HRW interviewed more than 50 Rohingya refugees who had fled to Bangladesh. The Rohingya said that Myanmarese security forces had carried out armed attacks on villagers, inflicting bullet and shrapnel injuries, and had burned down their homes. They informed the HRW about the military’s use of small arms, mortars and armed helicopters in the attacks.

The HRW has urged the United Nations to hold a public emergency meeting and warn the Myanmarese authorities that they will face severe sanctions unless they put an end to the brutal campaign against the Rohingya community.

Meenakshi Ganguly, HRW’s director for South Asia, said, “Rohingya refugees have harrowing accounts of fleeing Burmese army attacks and watching their villages be destroyed. Lawful operations against armed groups do not involve burning the local population out of their homes.”

Rohingya refugees walk on a muddy path as others travel on a boat after crossing the Bangladesh-Myanmar border, in Teknaf, Bangladesh, September 6, 2017. Credit: Reuters

HRW has obtained satellite images that show widespread burnings in northern Rakhine. It has also found 21 unique locations where heat sensing technology on satellites identified large fires. But the Myanmar government has continued to deny abuses by security forces, saying that it is engaged in a counter-terrorism operation as Rohingya militants and villages have burned 6,845 houses across 60 villages in northern Rakhine. But Myanmar’s army commander Senior General Min Aung Hlaing told the media that the clearing of Rohingya was “unfinished business” dating back to the Second World War.

But those who have escaped the violence have a different story to tell. Twenty-year-old Usman Goni recalls being hit by something that a helicopter had dropped in his village. Four of his friends died from fragment injuries. Goni was transferred to Bangladesh by fellow villagers for treatment but the fragments in his torso had not yet been removed when HRW met him in the hospital.

Momena, 20, describes the events that led her to flee her village of Kirgari Para on August 26 with two of her three children:

“I heard the sounds of fighting around 4 pm on Friday [August 25]. There was a lot of noise, worse than before. I saw them [the soldiers] myself as they entered my village. I don’t know how many there were but it looked like a lot to me. I fled with the other villagers and we sheltered in the jungle overnight. When I returned to the village the next morning, after the soldiers had left, I saw about 40 to 50 villagers dead, including some children and some elderly. All had knife wounds or bullet wounds – some had both. My father was among the dead; his neck had been cut open. I was unable to do last rites for my father, I just fled.”

HRW has asserted that its investigations in Rakhine point towards a campaign of ethnic cleansing. Although ‘ethnic cleansing’ is not formally defined under international law, an UN commission of experts has defined it as a “purposeful policy designed by one ethnic or religious group to remove by violent and terror-inspiring means the civilian population of another ethnic or religious group from certain geographic areas…. This purpose appears to be the occupation of territory to the exclusion of the purged group or groups.”

“There is no indication that the horrors we and others are uncovering in Rakhine state are letting up. The UN and concerned governments need to press Myanmar right now to end these horrific abuses against the Rohingya as a first step toward restoring Rohingya to their homes,” Ganguly said.