A UN report in February said security forces instigated a campaign that "very likely" amounted to crimes against humanity and possibly ethnic cleansing. 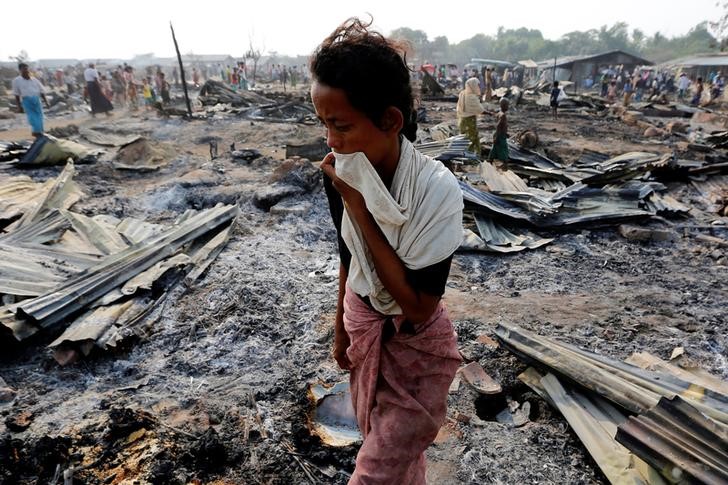 A woman walks among debris after fire destroyed shelters at a camp for internally displaced Rohingya Muslims in the western Rakhine State near Sittwe, Myanmar May 3, 2016. Credit: Reuters/Soe Zeya Tun

Yangon: Myanmar, on Sunday, rejected allegations of crimes against humanity and ethnic cleansing during a crackdown against Rohingya Muslims last year, accusing the UN of making exaggerated claims in its report on the issue.

Rohingya militants killed nine border guards in October, sparking a response in which the army was accused of raping Rohingya women, shooting villagers on sight and burning down homes, sending an estimated 75,000 people fleeing to Bangladesh.

A UN report in February said security forces instigated a campaign that “very likely” amounted to crimes against humanity and possibly ethnic cleansing. This led to the establishment of a UN probe which is being blocked by Myanmar.

The country’s own 13-member investigation team – led by former head of military intelligence and now vice president, Myint Swe – has been dismissed by human rights monitors as lacking independence to produce a credible report.

Speaking to reporters gathered in Yangon to conclude its eight-month-long probe, Myint Swe said the UN report exaggerated the claims and created misunderstanding for the international community.

“There is no possibility of crimes against humanity, no evidence of ethnic cleansing, as per UN accusations,” said Myint Swe.

He added that, “some people from abroad have fabricated news claiming genocide had occurred, but we haven’t found any evidence.”

The panel said that the UN report did not take into consideration “violent acts” committed by the insurgents, instead focusing on the activities of the security forces.

The UN did not immediately respond to a request for comment.

The Myanmar commission had received 21 reports from villagers of incidents of murder, rape, arson and torture by the security forces, but, unable to verify their veracity, it referred them to the authorities.

“We opened doors for them to complain to the courts if they have evidence that they suffered human rights abuses, but no one came to open a lawsuit until now,” Zaw Myint Pe, the secretary of the panel said.

The commission blamed the violence on the insurgents, accusing them of links to organizations abroad, “set up to destabilize and harm Myanmar.”

The treatment of the roughly one million Muslim Rohingya has emerged as majority Buddhist Myanmar‘s most contentious rights issue as it makes a transition from decades of harsh military rule.

The Rohingya are denied citizenship and classified as illegal immigrants from Bangladesh, despite claiming roots in the region that go back centuries, with communities marginalised and occasionally subjected to communal violence.