Under Suu Kyi's plan to shut down all camps in Rakhine district, people struggle to put their lives together, while others are hopeful for a better future. 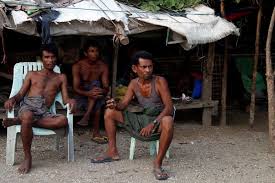 Yangon/Ramree, Myanmar: When Nwe Nwe Oo left Myanmar’s restive Rakhine state for the commercial hub of Yangon with a $590 government stipend in her pocket, she hoped to escape persecution against minority Muslims and start a new life.

Two months later, the 50-year-old widow, who had lived in the rundown camp for displaced people since Rakhine was roiled by communal violence in 2012, has already spent more than half of the money to rent a room of eight square meters (86 sq ft). With few job prospects and high living costs, she struggles to feed her two daughters in a strange city 500 kilometres (310 miles) from home.

“What do we eat after the money runs out? We are all very worried. I can’t find a job here,” said Nwe Nwe Oo. The family is dependent on her elder daughter who earns $88 a month in a tea factory.

The authorities began shutting her small camp in the town of Ramree in April, the start of a push by Aung San Suu Kyi’s government to close down all such camps in Rakhine within five years, following a recommendation from a commission led by former UN chief Kofi Annan.

Humanitarian experts back the eventual closure of the camps but criticize the way the government has begun the task, which they say sets a worrying precedent for the handling of much larger camps elsewhere in Rakhine where tens of thousands of people still live.

Without more efforts to bring peace and stability to Rakhine, “by closing camps one will simply be transferring the problem to another place,” said Mark Cutts, Head of UN Office for the Coordination of Humanitarian Affairs (OCHA) in Myanmar.

Nwe Nwe Oo had little choice in moving to Yangon. The authorities said it was not safe for the 128 Muslim residents of the camp in Ramree, a coastal town in southern Rakhine, to remain in the town, where they had lived before the violence.

“We don’t have enough police force to prevent the conflict from happening again,” said Min Aung, spokesman of the Rakhine State government. “That’s why we allow them to relocate to other places as they want to.”

Nwe Nwe Oo’s family belongs to the Kaman Muslim minority, who, unlike the more numerous Rohingya Muslims from northern Rakhine, have Myanmar citizenship and are officially recognized as an ethnic group.

The homes of Kamans in Ramree were burned in the clashes between Muslims and Rakhine Buddhists in 2012 that killed nearly 200 and displaced tens of thousands in the state.

“The new government helped us move to Yangon, but what we hoped for was to return to our homeland. I don’t know whether that will ever happen,” Nwe Nwe Oo told Reuters.

She was among nearly 100 Kaman Muslims from the camp who since April were offered bus fares, air tickets as well as additional modest financial support if they chose to leave the Buddhist-majority area.

The OCHA’s Cutts said the Ramree Kamans told UN staff they were not allowed to go back to their original land and were given no viable options other than to leave.

In contrast to the Kaman Muslims, the government in April resettled nearly 300 ethnic Rakhine Buddhists, displaced in the same conflict, to 65 houses in the neighboring Kyauk Pyu area, local officials, residents and OCHA officials said. Each family was offered about $294 to settle in their newly-built homes with water, electricity and drainage systems.

Rights groups say that if the Kaman were not allowed to return to their places of origin, there is little prospect of a workable solution for the 120,000 stateless Rohingya Muslims still living in camps in Rakhine.

“If the government can’t facilitate the safe and voluntary return of the Kaman, a group they officially recognize as citizens, what hope is there for the Rohingya?” said Amnesty International researcher Laura Haigh.

Kaman residents said apartheid-like conditions in Ramree, where some bus drivers refuse to carry Muslims, give them little chance of finding a job or a good education for their children in the Buddhist-majority town of 97,000.

“I really love my homeland, but I will face so many problems if I stay,” said 55-year-old Tin Hla, a father of four and one of the last remaining residents of the camp, who is planning to move to Yangon this month.

Some former residents, though, remain hopeful that the closure of the camp will improve their daily lives.

Back in the Yangon suburb, another recently arrived Kaman Muslim, 28-year-old Kyaw Soe Moe, anxiously awaited the outcome of a job interview with a construction material company.

While life in the country’s largest city could be tough, the newly-arrived man said it’s an improvement compared with the days in the Ramree camp, where their movements were restricted and job prospects bleak.