Turkish President Tayyip Erdogan, who hosted the summit of more than 50 Muslim countries in Istanbul, said the US move meant Washington had forfeited its role as broker in efforts to end the Israeli-Palestinian conflict. 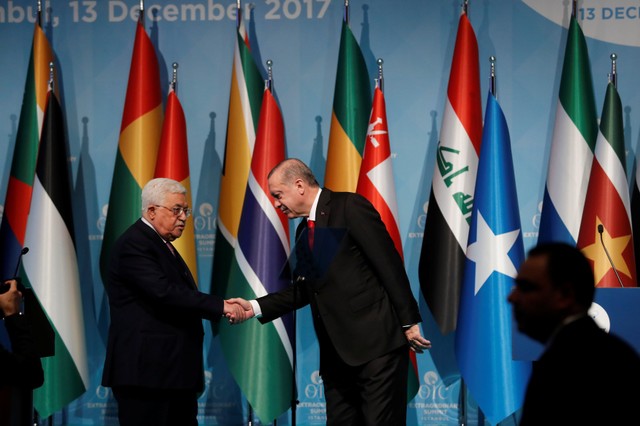 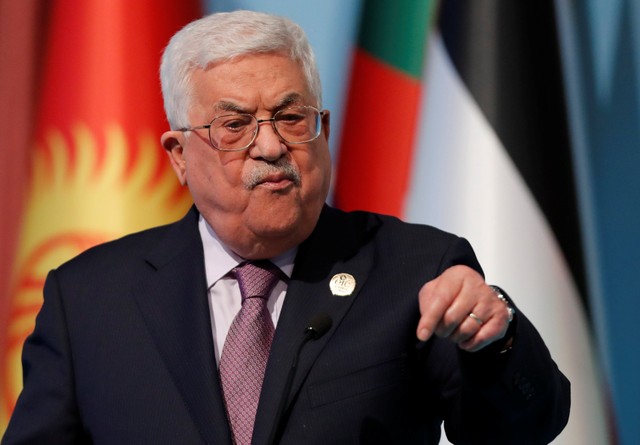 Turkish President Tayyip Erdogan, who hosted the summit of more than 50 Muslim countries in Istanbul, said the US move meant Washington had forfeited its role as broker in efforts to end the Israeli-Palestinian conflict.

“From now on, it is out of the question for the biased United States to be a mediator between Israel and Palestine, that period is over,” Erdogan said at the end of the meeting of the Organization of Islamic Cooperation member states.

“We need to discuss who will be a mediator from now on. This needs to be tackled in the UN too,” Erdogan said.

A communique posted on the Turkish Foreign Ministry website said the emirs, presidents and ministers gathered in Istanbul regarded Trump’s move “as an announcement of the US Administration’s withdrawal from its role as sponsor of peace”.

It described the decision as “a deliberate undermining of all peace efforts, an impetus (for) extremism and terrorism, and a threat to international peace and security”.

“Jerusalem is and always will be the capital of Palestine,” Abbas said, adding Trump’s decision was “the greatest crime” and a violation of international law.

Asked about the criticism at a State Department briefing in Washington, spokeswoman Heather Nauert said that despite the “inflammatory rhetoric” from the region, Trump “is committed to this peace process.”

“That type of rhetoric that we heard has prevented peace in the past,” she said, urging people to “ignore some of the distortions” and focus on what Trump actually said. She said his decision did not affect the city’s final borders, which were dependent upon a negotiation between Israel and the Palestinians.

But when asked whether East Jerusalem could similarly be recognised as the capital of a future Palestinian state, Nauert said that determination should be left to final status negotiations between Israelis and Palestinians. 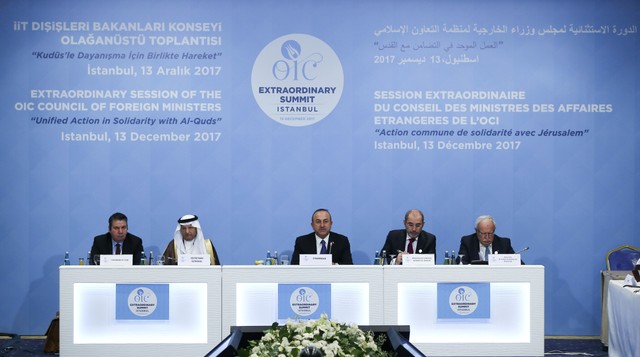 “We’re taking a position on how we view Jerusalem,” she said. “I think it’s up to the Israelis and Palestinians to decide how they want to view the borders – again final status negotiations.”

Abbas told OIC leaders in Istanbul that Washington had shown it could no longer be an honest broker.

“It will be unacceptable for it to have a role in the political process any longer since it is biased in favour of Israel,” he said. “This is our position and we hope you support us in this.”

Jerusalem, revered by Jews, Christians and Muslims alike, is home to Islam’s third holiest site and has been at the heart of the Israeli-Palestinian conflict for decades. Israel captured Arab East Jerusalem in 1967 and later annexed it in an action not recognised internationally.

The communique on the Turkish ministry website and a separate “Istanbul Declaration” distributed to journalists after the meeting said the leaders called on all countries to recognise East Jerusalem as the capital of Palestine.

“We invite the Trump administration to reconsider its unlawful decision that might trigger…chaos in the region, and to rescind its mistaken step,” the declaration said.

Iran, locked in a regional rivalry with Saudi Arabia, said the Muslim world should overcome internal problems through dialogue so it could unite against Israel. Tehran has repeatedly called for the destruction of the Israeli state and backs several militant groups in their fight against it.

“America is only seeking to secure the maximum interests of the Zionists and it has no respect for the legitimate rights of Palestinians,” Rouhani told the summit.

King Abdullah, whose country signed a peace treaty with Israel more than 20 years ago, said he rejected any attempt to alter the status quo of Jerusalem and its holy sites.

Abdullah’s Hashemite dynasty is the custodian of Jerusalem‘s Muslim sites, making Amman sensitive to any changes in the city.

Not all countries were represented by heads of government. Some sent ministers and Saudi Arabia, another close ally of Washington’s, sent a junior foreign minister.

Summit host Turkey has warned that Trump’s decision would plunge the world into “a fire with no end in sight”.

Erdogan described it as a reward for Israeli actions including occupation, settlement construction, land seizure and “disproportionate violence and murder”.

“Israel is an occupying state (and) Israel is a terror state,” he told the summit.

“I invite all countries supporting international law to recognise Jerusalem as the occupied capital of Palestine,” Erdogan told OIC leaders and officials.

Trump’s declaration has been applauded by Israeli Prime Minister Benjamin Netanyahu, who said Washington had an irreplaceable part to play in the region.