How Moscow Celebrated 50 Years of the Russian Revolution in 1967

Red flags with the hammer and sickle fluttered in the hands of school children, and millions of people arrived from every corner of the vast USSR to celebrate the milestone anniversary. 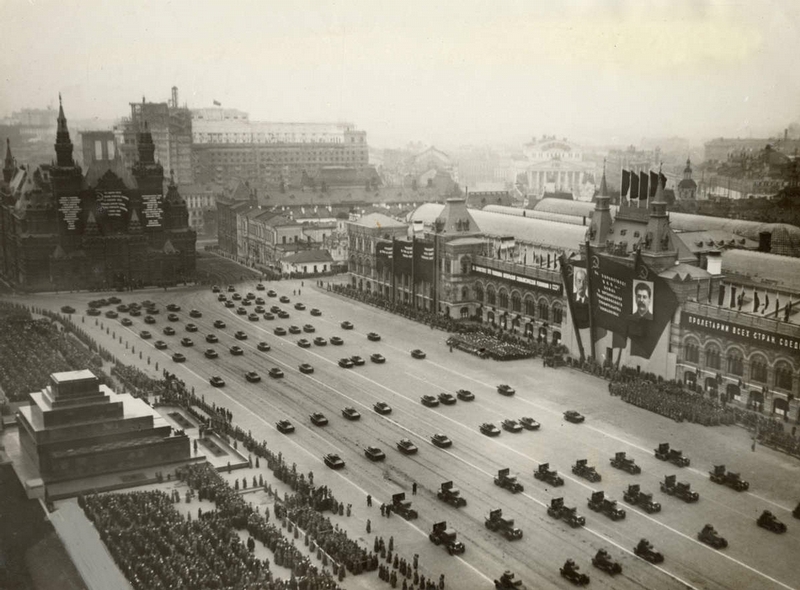 The October Revolution parade in Red Square in Moscow in 1933. Credit: Wikimedia Commons

All of the Soviet Union celebrated the 50th anniversary of the Proletarian Revolution in 1967 with a tremendous show of political power, military might, and social achievements. I had been in Moscow barely a month and a half when the big day of parades, fireworks and speeches arrived.

I landed in Moscow for a five-year study programme at the Moscow State University on the September 24, 1967. Right from that day, along with the entire country, I was also swept up in the excitement of the 50th anniversary of the “Great October”.

There were mammoth hoardings that might have covered the length of two city blocks, plastered with patriotic slogans, one of which I recall because it read like a mathematical formula: “Soviet Power + Electrification of the Nation = Communism”. Many clarion calls for the forward march to communism bellowed in letters as large as small buildings. There was also plenty of boastful chest-thumping in those messages, declaring that such and such a factory had over-fulfilled its plan.

And then there was the ubiquitous slogan, brief and eloquent, that just said “The Great October”.

All around was the colour red.  Red banners. Red letters. Red sickles and hammers.

Posters showed Vladimir Lenin, coat-tail caught in the velocity of his unmistakable stride to the future, to communism, to the dictatorship of the proletariat.

Red enamel stars shone on pins you bought at kiosks.

There was no mention of Stalin.  That was not a name you saw anywhere. I was quite taken aback I remember, when I visited Lenin’s mausoleum, to find a memorial to Joseph Stalin along the outside wall, where flowers had been laid. I learned later that Stalin was never without a token floral tribute; such was the loyalty of his Georgian kinsmen, it was said.

“October” is never merely the name of the month in Russia. It is always a semantically charged term, especially when used in conjunction with the adjective “Great”.

The Great October Revolution actually falls on November 7, thanks to adoption of the Gregorian calendar, which is two weeks behind the Julian calendar, the one in use during the time of the revolution. So the word October itself had a resonance associated as it was with the revolution of 1917 that put Soviet power in place. I loved the term “Oktyabryata” to denote preschool children who were not yet young pioneers. You became a “pioneer” or the youngest group in the socialist brigade when you entered school.

That momentous month even had a literary joke around it. “Who was our first poet to sing of ‘October’?” went the question. “Pushkin, naturally” came the answer, “Because he began a poem with the line: ‘October has arrived’.” Of course, the humour here was that Pushkin predated the revolution by nearly a century, and his poem was about autumn’s glory.

So there was just a lot to see and a lot to absorb around Moscow those days, when revolutionary fervour showed itself in the festivities to come. Everything was focused on the Red Square. I knew from pictures I had seen of Soviet celebrations that there would be a show of military might on the Red Square with tanks and smart columns of men marching in uniform, saluting the Kremlin bosses. Days before the event, martial music began to resonate through the infinite number of speakers that lined every street. Postage stamps and postcards filled the glass cases in street-side kiosks, the image of Lenin and the sickle and hammer proliferating. 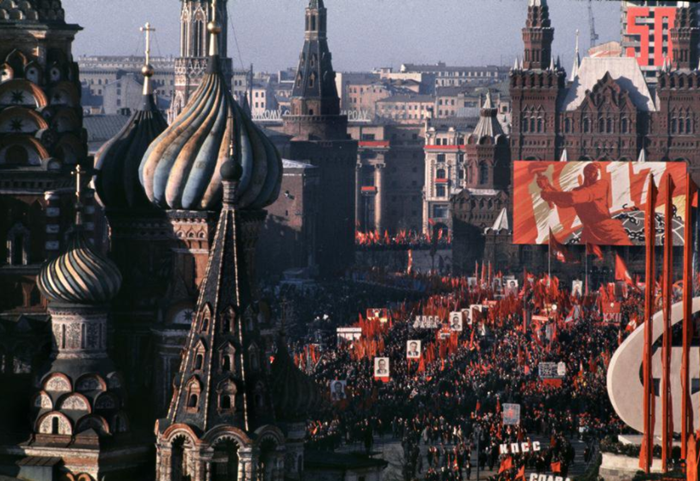 The 50th anniversary celebrations of October Revolution in Moscow in 1967. Credit: Twitter/Pritzker_Prize

I went to see the Red Square on the evening of the 50th anniversary celebrations with newfound friends in Moscow. My teacher in India, Lyudmila Maksimovna, had given me a letter of introduction to her family, who welcomed me with typical Russian warmth. So after a sumptuous festive tea with Vadim Ivanovich, her husband, and Ivan, their son, at their apartment near the metro station Dinamo, I stepped out into the frosty November air with the papirosi-smoking dad and his little boy.

Metro stations were full to overflowing. Groups of people with accordions sang , everyone wore red stars on their lapels. Medals glinted on the breast of padded jackets and great coats of retired Red Army heroes. Clichés and clarion calls were everywhere: stylised red stars abounded, as did slogans that pulsated with optimism for the future, loudly boastful of Soviet power and its achievements. Literally millions of red flags with the hammer and sickle fluttered in the hands of school children, millions of people arrived from every corner of the vast USSR to celebrate the milestone anniversary.

That evening has remained bright in my treasure trove of memories.

As soon as we got off our train and began the walk to the exit, Vadim had his son and me flanking him, Ivan’s hand in one of his large palms, and my arm tucked firmly into his. We walked for a couple of hours that cold and bright autumn night in and around the grand edifices of the old and new Russia, with the beautiful towers of the Kremlin and the high walls lit up, against which the onion domes of the Cathedral of Vasily the Blessed stood in its exquisite beauty. We must have talked, we must have eaten hot pirogis – fried stuffed breads – wrapped in newspaper, we must have seen drunks on metro station stairs, and we must have heard accordions and harmonicas in that night of public celebration. And there must have been a majestic and thrilling display of fireworks, loved by all of Russia.

Above nearly everything that I saw and experienced that day, I most remember one thing: Vadim never let go of my arm as long as we were surrounded by the jam-packed and drifting crowd. His short, padded jacket and its papirosi – the rough Russian cigarette with its own cardboard filter – suffused smell of tobacco smoke come alive every time I think of that evening.

Kamakshi Balasubramanian is a retired educator and occasional writer.