This was tailored, as per officials, to reflect the geographic expanse of India’s definition of 'Indo-Pacific.' 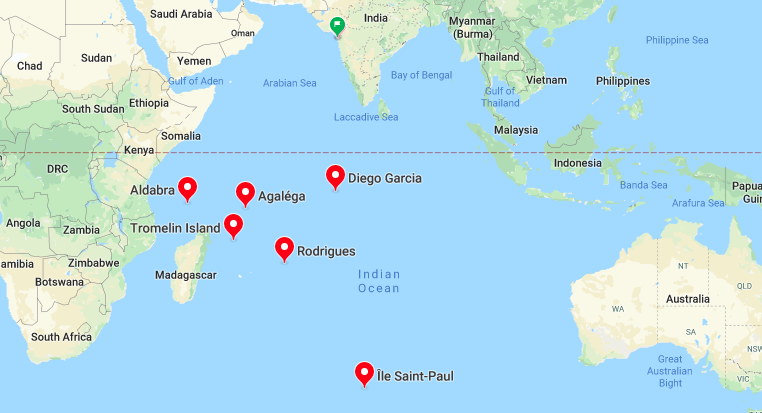 Some of the islands on the Indian Ocean. Photo: Google Maps

New Delhi: With a view to exhibit New Delhi’s expansive view of the concept of Indo-Pacific, the Ministry of External Affairs has, for the first time, brought together all the major islands nation-states in the western and south Indian Ocean from Madagascar to Sri Lanka under one department.

The Ministry of External Affairs is organised on the basis of divisions, which are based on geography or along certain themes. Over the years, these divisions have evolved, split or have been merged based on foreign policy priorities.

Earlier this year, the MEA got a brand-new Indo-Pacific division to reflect the priority given to the region and bring about a sense of coherence within its various regions. The division would also look at the multilateral linkages in the region in a holistic fashion. The new division largely subsumed the previous ASEAN (multilateral) division, and included the Indian Ocean Rim Association (IORA), and the ‘Quad’ in its ambit.

It was separate from the Indian Ocean region division which looked at bilateral relations with Sri Lanka, Maldives, Mauritius and Seychelles. Now, this division has been further expanded westwards.

On December 16, the MEA issued an office memorandum that the western Indian ocean nations of Madagascar, Comoros and the French territory of Reunion islands will now be part of the IOR division. They were earlier a part of the East and Southern Africa division.

This was tailored, as per officials, to reflect the geographic expanse of India’s definition of Indo-Pacific. “This makes sense as even these island nations did not necessarily want to be clubbed with Africa and had a separate identity,” said an MEA official.

In a speech last Saturday, external affairs minister S. Jaishankar admitted that there was still no consensus on the definition of Indo-Pacific, but suggested that this should not prevent further engagement with the concept.

He also noted that India’s view of Indo-Pacific included not just the eastern part of the Indian ocean, but also neighbours in the gulf, island nations of the Arabian sea and “partners in Africa”.

Against a backdrop where Chinese presence has continued to shore up, India has stepped up bilateral contacts with states in the western Indian Ocean region. Last year, Indian President Ram Nath Kovind visited Madagascar for the first time. This year, Vice President Venkaiah Naidu visited Comoros in October.