Migrants Cheer as Rescuers Tell Them "Libya Is Over"

"In a few day, you will be in Italy, in Europe. Libya is over," each group of migrants on the boats was told in English or French. 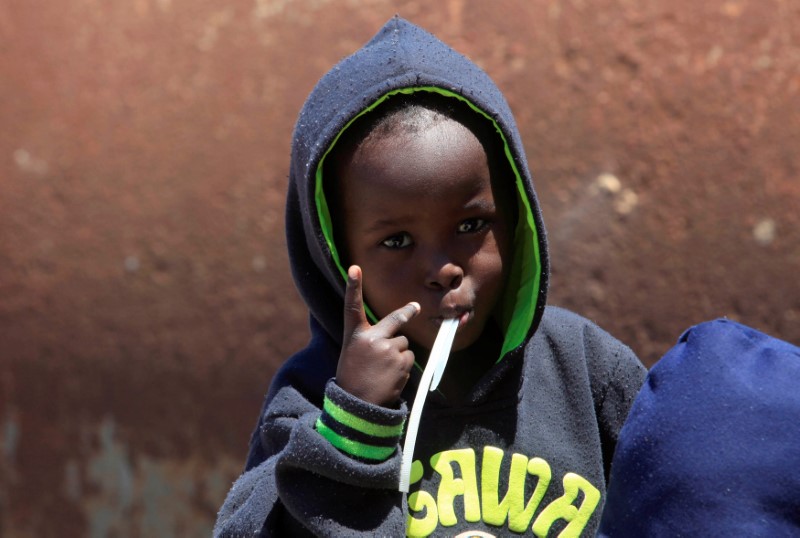 An illegal migrant boy gestures at Gasr Garabulli port after he was rescued by Libyan Coast Guard, east of Tripoli, Libya, May 18, 2017. Credit: Reuters/Ismail Zitouny

Aboard the Aquarius rescue ship: Rescues began at dawn on Thursday (May 18) and by the end of the day some 2,300 migrants had been pulled off 22 wooden and rubber boats in the Mediterranean, with many rejoicing when rescuers told them that their long journey to Europe was almost over.

At one point, ten migrant boats could be seen floating on the horizon just outside Libya’s territorial waters, with the shoreline visible in the distance.

A surveillance aircraft circled above and Libyan coast guard speedboats set fire to migrant boats once their passengers had been recovered, to stop smugglers recovering and reusing them.

From the rescue ship Aquarius, operated by SOS Mediterranean and Doctors without Borders, two rigid-hulled inflatable boats were launched to collect the migrants from over-loaded rubber boats and bring them – 18 or 20 at a time – to the ship.

“In a few day, you will be in Italy, in Europe. Libya is over,” each group was told in English or French, often drawing applause and cheers of joy from those who were not too exhausted, seasick or traumatised from their journey.

Nigerians, Sudanese, Moroccans, and Bangladeshis were among those rescued by the Aquarius.

Smugglers are cramming migrants onto boats in Libya at a record pace this year. Arrivals in Italy, where rescued migrants are brought, are up 35% in the same period last year.

Many have endured years-long journeys that took them across the Sahara desert to Libya, where often they fall into the hands of criminal groups who detain, extort, abuse, buy and sell them. The lucky ones get onto boats and are rescued by European vessels.

To try to give the UN-backed government in Tripoli more power to stop people smuggling, Italy and the European Union are equipping and training the coast guard to patrol these waters and turn back migrant boats.

But humanitarian groups dispute this strategy, saying returned migrants will be put in detention centres controlled by the Tripoli government, where they can be held indefinitely in appalling conditions, and are given little food and no medical care.

The Libyan coastguard said it intercepted some 600 migrants on boats on Thursday.

“On the Libyan side, we will not always intercept the migrants unless we feel that the UN and the EU are serious about deportation [to home countries],” coastguard official Abdullah Tomia told reporters in Tripoli.

Many of the more than 560 migrants rescued and brought on board the Aquarius slept deeply on deck after reaching safety.

About ten small children who travelled with their families were among those rescued, as were more than 90 unaccompanied minors and about ten pregnant women.

“After several days of bad weather, we got a lot of boats today,” said Marcella Kraay, project coordinator on the Aquarius for the Doctors without Borders charity. “But otherwise it was a pretty typical rescue.”