Migrant Women Workers and a 'Lost Generation' of Children in Kyrgyzstan

Despite the fact that these women are sometimes the main source of income in their families, they have to face misogynistic behaviour – and violence. 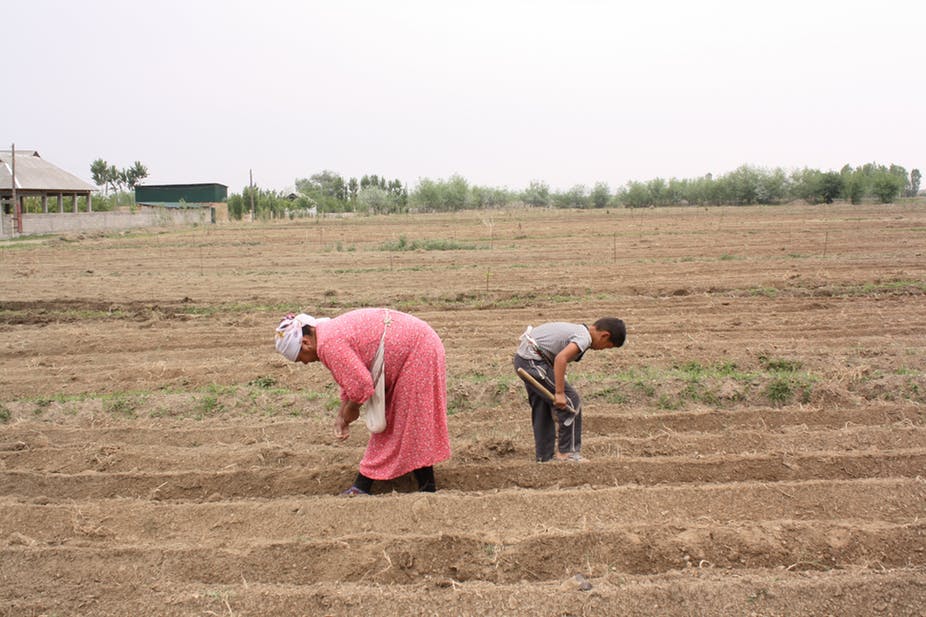 Dilya-eje, a secondary school teacher in the border village of Samarkandek, Kyrgyzstan, often visits the houses of her neighbourhood to record the children who should attend school the next year. She always indicates the status of their parents in her notebook. More than half of the parents are labelled as migrants.

When men migrate, women take on the usual male roles: today most agricultural labour in the villages is done by women. But in Kyrgyzstan there are also a high number of women migrants. In 2016, women accounted for about 40% of total Kyrgyz labour migrants to Russia. Some are divorced or married women and some are very young girls who begin to earn money just after graduating from high school. Women migrating to Russia are usually employed in the service sector.

Because of these trends, traditional notions of femininity and masculinity are now often in conflict. Despite the fact that these women are sometimes the main source of income in their families, they have to face misogynistic behaviour – and violence.

‘A real woman is willing do housekeeping’

Labour migration is always accompanied by a dichotomy between economic benefits and social consequences.

Among 6,000 households interviewed, it was found that more than half of respondents (51% of women and 61% of men) believe that a “wife’s career is less important than the career of her husband”. Meanwhile, 43% of men and 38% of women felt that a “woman’s work has negative impact on family and children”. Most respondents agreed that “a real woman is willing do housekeeping – it is a pleasure for her”.

Women returning from labour migration also face problems of reintegration into the family and alienation of children. At the same time, studies have shown that remittances home are mostly spent on regular consumption, such as food, medicines and clothes. Large amounts of savings go towards buying the likes of homes or cars.

It is difficult to trace what part of the remittances are made by migrant women, but it should be noted that migrants from Kyrgyzstan transferred an average annual amount of a third of the country’s GDP between 2012 and 2014.

Despite the negative public attitude to women’s labour migration, it helps many women to gain financial independence and gain experience of making their own choices of partner, budget, and investments which they could not do in traditional rural patriarchal communities from which they mostly come. Labour migration also remains the most accessible way of socialisation for them.

Migration transforms gender relations in modern Kyrgyz society, in which the Soviet emancipation of women, the renaissance of Islam and capitalism compete in forming a new national identity.

Today, such changes are perceived as a threat by many Kyrgyz men, some of whom turn to violence. This new environment has allowed the emergence of nationalistic Kyrgyz male groups called “Patriots”, who form “moral police” to pursue Kyrgyz women who lead what they regard as an immoral lifestyle in Russia.

According to the UNFPA survey, such actions are supported by a majority of the Kyrgyz population:

over half of the respondents support the work of nationalist organisations … stripping, raping them [the migrant women] and uploading their photos and ‘punishment’ videos for bad behaviour. At the same time, 22% of women and 26% of men do not consider it immoral for a man to create a new family in migration, if he continuously takes care of the first family left behind in his country of origin.

Criticism was only concentrated in the circle of the liberal minority.

“What the girls are blamed for is the result of poverty and marginalisation. But no one has the right to give a moral assessment of their behaviour. If these guys were real patriots, then they would … help them find jobs, look for housing”, claimed Nurgul Asylbekova, an UN Development Programme representative.

Beyond attacks, the underlining issue is a public conflict about what a Kyrgyz woman should be, and what it means to be a Kyrgyz man. It reveals a deep fracture in Kyrzgyz society.

Hostages of a patriarchal culture

The country as a whole has a high level of violence against women: nearly one-third of women and girls, age 15-49 face violence. In this context, violence against migrant women does not seem to be anything outrageous.

Husbands of migrant women are also hostages of patriarchal Kyrgyz culture. Childcare and household management lowers their social status in society. They also, experience pressure in their communities. As a result, public condemnation mixed with physical separation often leads to the disintegration of the women’s families.

Despite the fact that there are more than 15,000 registered NGOs in a country of six million people, none specifically addresses the problems faced by migrant women. Most migrant women who return home need employment, psychological aid and medical care.

It is obvious that female migration in Kyrgyzstan is not a temporary phenomenon. The teacher, Dilya-eje, uses her own definition for migrant children: “a lost generation”. Such a definition does not exist in the language of the government, international organisations and NGOs in Kyrgyzstan. Women’s migration is still an invisible phenomena. Yet an open public debate is needed to address the new gender order and the deep societal changes that are fostered by migration.