Mexico's most wanted man for years, Joaquin "El Chapo" Guzman's trial has finally been set for April 2018 on drug trafficking and conspiracy charges. 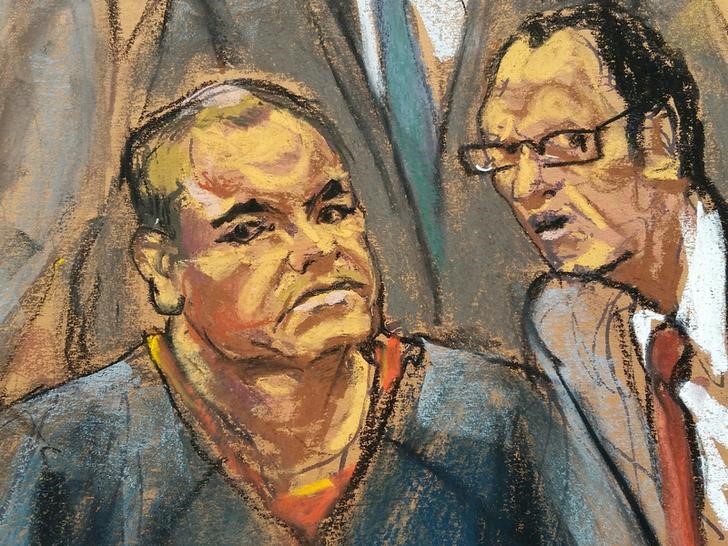 Joaquin "El Chapo" Guzman (L) is shown with an interpreter in this courtroom sketch in the Brooklyn borough of New York City, New York, US, February 3, 2017. Credit: Reuters/Jane Rosenberg/Files

New York: A US judge has scheduled the trial of Mexican drug lord Joaquin “El Chapo” Guzman – for years his country’s most wanted man – on drug trafficking and conspiracy charges for April 16, 2018.

US district judge Brian Cogan in Brooklyn federal court acknowledged at a hearing Friday that the date was “somewhat aspirational” and could be delayed, given the complexity of the case and the amount of evidence that lawyers must review ahead of trial.

The hearing came the day after Cogan refused to order Guzman released from solitary confinement in a New York City federal prison, where his court-appointed lawyers have said he faces needlessly harsh and restrictive conditions that make it difficult for him to mount his defence.

The judge did, however, rule that Guzman could send pre-screened letters to his wife, Emma Coronel, who was present at Friday’s hearing. She has not been allowed to visit him.

Michelle Gelernt, one of Guzman’s lawyers, again brought up the conditions of Guzman’s imprisonment at Friday’s hearing, saying it was difficult to review evidence because lawyers were only allowed to speak to Guzman through a plexiglass barrier.

Cogan said he would send a magistrate judge to look at the room where Guzman meets with his lawyers and make recommendations about how the problem could be overcome, though he said he did not want to “micro-manage” the prison.

Guzman also said at the hearing, through an interpreter, that he understood that four of the witnesses expected to testify against him had previously been represented by the same federal public defender’s office that represents him, though not by the same attorneys, raising the possibility of conflicts of interest.

He said he wished to keep his attorneys nonetheless.

All four of those witnesses, whose names have not been disclosed, are currently serving prison sentences in the US, Coogan said.

Guzman, who sold oranges as a child before turning to the drug trade in the 1970s, was extradited from Mexico to the United States to face drug trafficking charges on January 19. He had previously escaped from two Mexican prisons.

In his most recent escape in 2015, Guzman walked out of prison through a mile-long, highly engineered tunnel from his cell, a sign of the huge influence he was able to wield even from behind bars.