Clashes between the police and protestors broke out after the government did not implement the court's order. 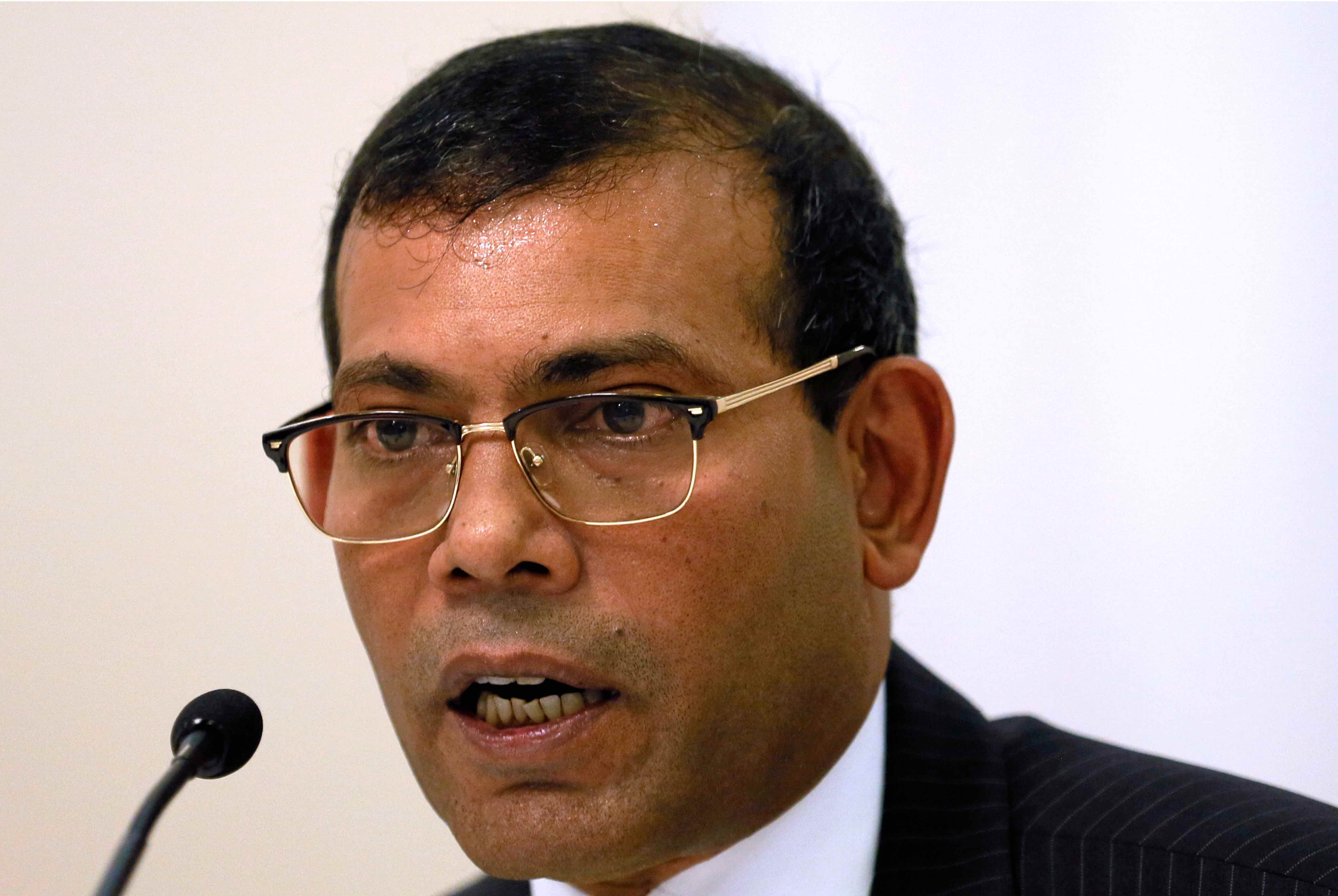 New Delhi: In a dramatic Thursday night order, the Maldives Supreme Court ordered the immediate release of all nine political prisoners, including former President Mohamed Nasheed, and reinstated 12 members of parliament who had been stripped of their posts. However, the government has till now refused to implement the ruling of the Indian Ocean nation’s highest court, even as clashes broke out on the streets of its capital, Male.

President Abdulla Yameen ensconced himself with top officials of his government at Maldives National Defence Force (MNDF) headquarters, from where the attorney general announced the firing of the police chief. The Maldives police’s twitter account had announced soon after the ruling that it will enforce the Supreme Court order.

At around 10:15 pm local time on Thursday, the Maldives Supreme Court unexpectedly ordered the release of all political prisoners, including Maldivian Democratic Party’s Nasheed, Jumhoree Party chief Gasim Ibrahim and Adhaalath’s Imran Abdulla. Nasheed and Gasim are currently in self-exile after being given permission to leave the country for medical treatment.

The five-page order argued that the nine political prisoners were tried without due process, violating both the Maldivian constitution and international human rights treaties.

Ordering their immediate release and a re-trial, the Maldivian apex court also noted that prosecutors and judges had been “unduly influenced” to conduct “politically motivated investigations”.

Also read: You Have to Be Blind Not to Read the Signs: Ex-Maldives President Mohamed Nasheed

The Supreme Court ruling also annulled the July 2017 order that stripped members of parliament of their seats, if they defected. According to the court, the previous July order had only been a temporary solution and the executive should have brought in relevant legislation.

The court said that the first sitting of parliament in 2018 had to be convened with the full membership prior to July 2017 judgement. This means that 12 ruling party MPs who had joined the opposition have been effectively reinstated, giving the opposition alliance a clear majority in the 85-member legislative body.

The government had first approached the Supreme Court in July last year for an anti-defection ruling after the opposition submitted a no-confidence motion against the speaker.

The order also said that implementation of the ruling was binding on the government, parliament, security services and other state institutions. It also called upon the prosecutor general to bring charges if the implementation of the order is obstructed, violated or neglected by any individual.

There had been a steady drumbeat of political developments over the last week which culminated in the Supreme Court order.

After six months in custody, MP Faris Maumoon had been released on January 25. Within two days, he was re-arrested on orders of President Yameen, his estranged uncle. Faris and his father, Maumoon Abdul Gayoom, have been involved in a bitter political fight against Yameen following the former dictator joining the opposition alliance against his younger half-brother.

The accredited diplomatic missions of the EU, UK, US, France, Germany, Italy, Netherlands and Romania had issued a joint statement criticising the renewed arrest of Faris as a violation of “rule of law and good governance”. 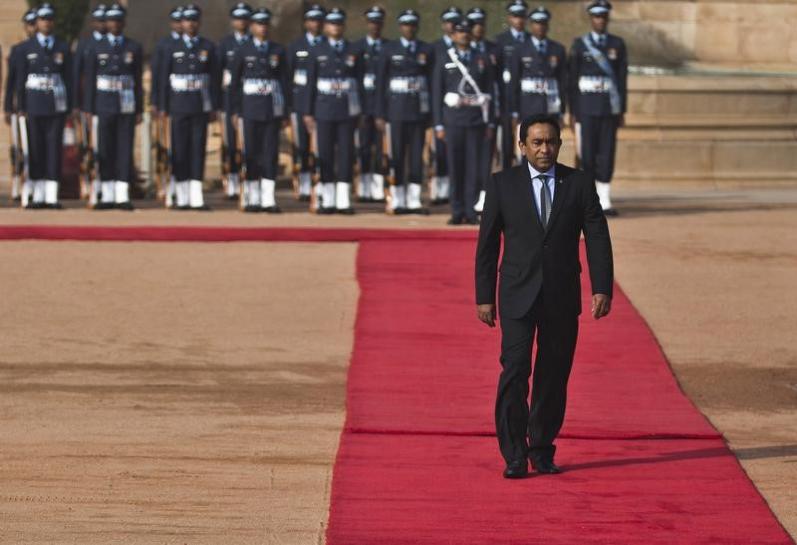 The group of Western nations also urged the Maldives government to demonstrate “genuine commitment to credible, transparent and inclusive election and pre-election processes, with the full participation of all political parties”. It was an implicit reference to the suspicion that Yameen’s actions could result in no viable opposition candidates contesting in the scheduled presidential elections in 2018.

Yameen is not a stranger to international criticism. He had withdrawn the Maldives from the Commonwealth after the multilateral body expressed concern over the Maldivian government’s democratic credentials. While he may not get much support from the West, Yameen has strong backing from China and Saudi Arabia.

Therefore, despite the statement, Yameen continued to turn the screws. Gayoom’s private secretary Najma Ibrahim, his private security guard Mohamed Azmee and an expatriate driver were arrested on the basis of warrants saying that they could obstruct an ongoing investigation. On Thursday afternoon, Maumoon’s son-in-law Ahmed Nadheem was taken into custody.

The Election Commission chairman, who had been a member of the breakaway faction of the ruling Progressive Party of Maldives, stepped down on January 31.

According to sources in the opposition, Maldives Supreme Court judges, who had consistently given advantageous orders for the government over the years, may have finally ‘rebelled’ due to President Yameen’s ‘meddling’. “They are troubled with many problems from their past and it has not been easy for them. I believe they could not take the pressure anymore,” a senior opposition official told The Wire.

Immediately after the order was announced, opposition supporters came out on the streets of the Maldivian capital, waving national flags and cheering. Most of the crowds congregated outside the office of the principal opposition party, MDP.

Gayoom tweeted that “justice had prevailed” and called upon security forces to enforce the order “in totality”.

I call on @MvDefence @PoliceMv and all state organs and agencies to respect and abide by tonight’s Supreme Court ruling. It is absolutely clear and unambiguous. It must be enforced in its totality!

US ambassador to the Maldives Atul Keshap tweeted to “welcome” the Supreme Court’s order to release all political prisoners. He also urged the government and security forces to “respect this ruling”.

The opposition’s spirits rose when the Maldives police posted on its official twitter account about an hour after the Supreme Court order that it would enforce the ruling.

However, rumours had also begun to circulate that President Yameen was at the headquarters of the MNDF.

A little past midnight local time, Maldives attorney general Mohamed Anil announced at a televised press conference that the police chief had been fired on presidential orders.

With the defence minister, home minister and the army chief in attendance, Anil said that the president invoked his powers after police chief Ahmed Areef did not pick up his phone “at this sensitive time, to conduct safety and security related work”.

A photograph of Yameen striding past the venue of the press conference at MNDF headquarters went viral across Maldivian social media.

Maldives’ top legal officer also raised doubts about the validity of the order, claiming that the authenticity of the judgment was suspect. Within a few hours, a signed copy of the Supreme Court judgement was posted online on the official website. The earlier copy did not carry the signatures of the five judges. The opposition Jumhoree Party wrote to the Supreme Court to take action against the attorney general for not implementing the February 1 order.

The highest court in the Maldives also issued another order withdrawing arrest warrants against three people, including Gayoom’s son-in-law and two lawmakers.

After the press conference, the police started to move in on the supporters. About four hours after the order, teargas shells were fired as special ops police moved in on the crowd sand bundled up people for arrests. There were some clashes, with a few projectiles thrown at the police.

The opposition-aligned TV channel reported that the Maldives Broadcast Authority has warned against any broadcasts that impacted national security could lead to closure of the media station “without any warning”.

The former president and opposition leader Nasheed told the local TV channel Raajje TV that he was consulting with his party and opposition alliance on his return to Maldives.

“I will go to Malé. But I do not plan to go tonight…. That’s not what I’m being advised by my party. As you know, we are in a united coalition, I am the president of the Maldivian Democratic Party, so I will move forward wisely with the advice of the party and the united parties,” he said.

The government’s strategy seems to be to project a non-confrontational public image – a tactic which could allow Yameen to buy time.

A senior Maldives police official announced on the state broadcaster at around 2 am local time that the order had been received and it was going through the set procedures for implementation.

Maldives president’s international spokesperson Ibrahim Hussain Shihab said that the ruling has “significant implications” on constitutional matters and was issued without hearing the government’s side. “As such, the Administration will work to engage, and consult with, the Supreme Court in order to comply with the ruling in line with proper procedure and the rule of law,” Shihab said in a statement.

Yameen has announced a state of emergency earlier during his term due to opposition protests. But, according to the Maldives constitution, he will need parliament’s ratification of the proclamation within 14 days, if the Majlis was not in session.

While the roads of the Maldivian capital became quiet towards the early hours of morning, there is anticipation that there could be renewed protests after prayers on Friday.