Opposition, Journalists Face Raids and Detention Ahead of Saudi King's Visit to Maldives

The opposition and journalists have drawn the government's ire by raising suspicion over a plan to allow Saudi Arabia develop a township on an inhabited atoll.

New Delhi: Ahead of the first visit by the Saudi king, Salman Bin Abdulaziz, to the island nation, the Maldives government raided the premises of the main opposition party and detained journalists amidst fears of disruption after controversy broke out over plans to develop a $10-billion township by Saudi Arabia on an inhabited atoll.

The Maldives is the last stop of King Salman’s extravagant six-nation Asian tour, which began in Malaysia on Sunday.

This will be the first-ever visit by a Saudi monarch to the small Indian Ocean archipelago. King Salman has visited Maldives previously as defence minister and on a personal trip.

King Salman’s visit has courted some controversy in the Maldives over fears that Faafu atoll was being “sold” to the Saudi royal family as part of a massive investment deal.

Maldivian President Abdulla Yameen strongly refuted the rumours on Wednesday (March 1) at a party function. “What’s being talked about the most today is, what will be the benefit to the Maldives from King Salman’s visit, is Faafu atoll being sold. No, no place is being sold,” he said.

He stated that the Faafu project would be like “mixed development projects in French Rivera,” with sea ports, tourist resorts, airports and residential buildings. Yameen asserted that negotiations were ongoing on investment to the tune of $10 billion – which would be largest foreign investment in Maldives ever.

Yameen also compared the Faafu project with the cancelled contract with India’s GMR to develop and manage the country’s main airport, claiming that while the latter was built with Maldivian capital, the new Saudi proposal would be “forming new capital for the benefit of all Maldivian people.”

However, he did not give any more information about the project, adding that the details will be revealed once the agreement is signed. “No one has to be concerned over not getting details of these projects, especially senior statesmen,” he said.

Yameen’s critics were, however, not assuaged, with the Maldivian Democratic Party (MDP) and the Adhaalath Party raising suspicion over the details of the deal.

On 1 March, the MDP released a statement expressing “serious concern that the Faafu plans – which would allow a foreign power to control one of the country’s 26 atolls – amount to creeping colonialisation by the Saudi government”.

“The MDP is also deeply concerned about the rapidly increasing radicalisation in the Maldives. Reportedly, over 200 Maldivians have traveled to Syria and Middle Eastern countries, supported by known terrorist groups including ISIS,” the statement said. 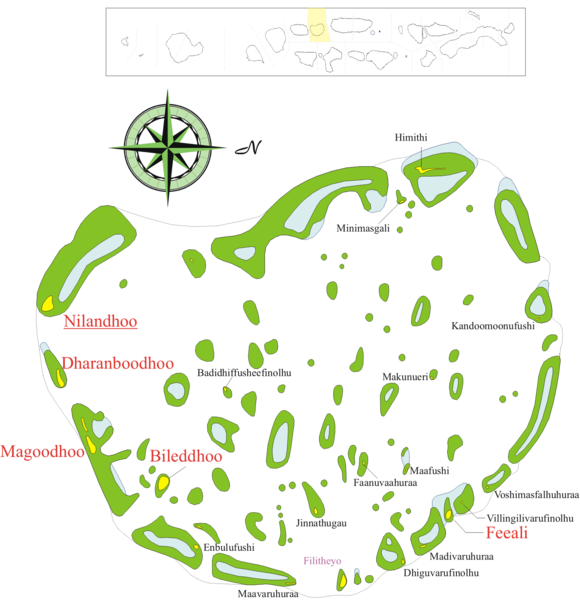 Earlier that day the Maldives Police had issued a notice warning legal action against anyone who behaves in a manner that is “offensive to a foreign dignitary”. The MDP had termed this as a “flagrant violation of the Constitution and Maldivians’ fundamental rights to free expression”.

Within a few hours, the police raided the MDP’s activities centre and carried away canvas fabric for banners for local elections, according to local news organisation, Mihaaru.

Around the same time, two journalists from the local English language news website Maldives Independent were detained for nine hours on Faafu after ruling party members threatened them.

According to a statement issued by Maldives Independent, reporters Hasan Mohamed and Hasan Moosa were in Nilandhoo, Faafu atoll, on assignment ahead King Salman’s visit.

“We are extremely disappointed with the police conduct in handling the complaint lodged by our journalists. The police claimed they were held in protective custody but they were treated like suspects,” said Ahmed Naish, acting editor of Maldives Independent.

According to the statement from the media group, the police questioned the two reporters on whether they planned to cover the protest against the Faafu deal on Friday (March 2) and if any foreigners had accompanied them. A police officer looked through their notes and photos before they were released, the statement added.

Explaining the genesis of the controversy, Maldivian author Azra Naseem said that Yameen had made a speech at Magoodhoo, an island in Faafu atoll, in which he talked about the Saudi investment plan for the island, which will bring development like they had ‘never seen before’.

“He explained the deal was already done, but didn’t give any details of what the project entails. All he would say was that it was an integrated tourism project, a rare ‘township’ of a type that was very rare in the world,” explained Naseem, who has written about the spread of Saudi influence in her country.

With the lack of details, speculation soon grew that Faafu would be ‘sold’ in some form to the Saudi royal family.

“This speculation was made possible by the fact that the government led a constitutional amendment allowing Maldivian territory to be sold (freehold) to foreign parties,” she said.

In July 2015, the Maldives amended the constitution to allow foreigners to buy land, rather than just lease plots upto a maximum of 99 years. This ownership of land was allowed to foreign nationals who were willing to invest at least $1 billion.

Besides political opposition, there were also environmental concerns. “If the project is to create a city like Dubai, which has a million people, that is more than twice the entire Maldivian population – imagine the destruction, both environmentally and socio-economically,” Naseem said.

Naseem pointed out that the Maldives government was “packaging” the entire project and visit as “blessed”. “He is warning people against saying anything that would harm the sanctity of the visiting royals,” she told The Wire.

India had been taken aback when the Maldivian parliament had hurriedly passed the constitutional amendment in 2015. Malé managed to assuage New Delhi’s main concern that Chinese entities should not get any toehold in the Maldives through this amendment. Even at that time, Indian officials knew that this constitutional amendment was pushed through by Yameen, mainly with Gulf, and particularly Saudi, investment in mind.

Less than a month after the constitutional amendment was approved, Saudi Arabia opened its embassy in August 2015.

Saudi Arabia’s influence in the Maldives has been steadily increasing. Last May, the Maldives severed diplomatic ties with Iran, just a month after the new Iran ambassador had presented his credentials.

As it spends heavily on big ticket infrastructure projects, the Yameen government has become more dependent on Saudi aid to keep the Maldives’ books in the black. In September, Saudi Arabia gave the Maldives a $100 million loan to finance the expansion of the main international airport, the contract of which was awarded to the Saudi giant Binladin group.

Although India remains wary of the spread of Wahabi Islamic ideology in the Maldives, New Delhi is relatively sanguine about the investment by the Saudis, since it does keep the Chinese from increasing their presence through infrastructure contracts.