On Monday, a no-confidence vote against Speaker Abdulla Maseeh Mohamed had been previously scheduled, but cancelled last week. 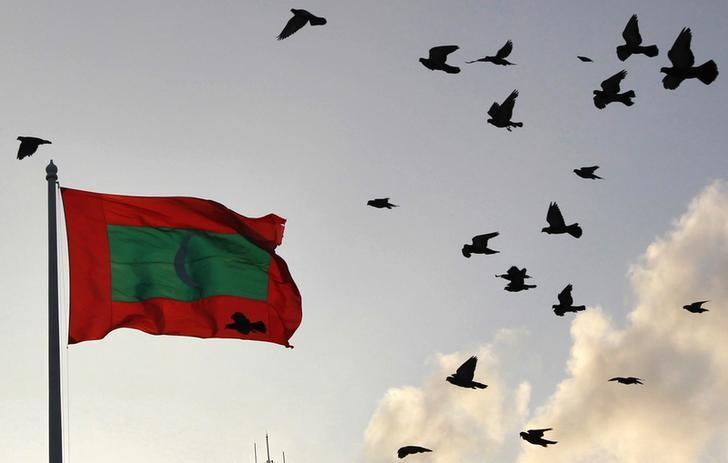 A Maldives national flag flutters as pigeons fly past during the morning in Male February 8, 2012. Credit: Reuters/File photo

New Delhi: There were dramatic scenes both inside and outside the Maldives parliament complex, with soldiers dragging out lawmakers and using pepper spray to stop the opposition from entering the building to hold a vote to impeach the parliamentary speaker.

On Monday, a no-confidence vote against Speaker Abdulla Maseeh Mohamed had been previously scheduled, but cancelled last week. The motion moved by the opposition had been cancelled after four former ruling party members who had signed the petition to submit the motion were disqualified from their parliamentary seats, based on a Supreme Court ruling on July 13. Armed with the SC order, Maldives deputy speaker had said that the July 24 no-confidence vote was cancelled the number of signatures required to submit a no-confidence motion fell below the minimum threshold of 42, with the names of the ‘disqualified’ MPs.

This was the second attempt by the Maldivian opposition to deal a political blow to President Yameen by impeaching his close ally.

As per media reports, the Maldives police spokesperson had held a briefing on Sunday and warned that opposition lawmakers will not be allowed to enter the Majlis. The parliament was apparently closed till July 31, due to “security arrangements” for the independence day celebrations on July 26. Pakistan’s Prime Minister Nawaz Sharif is scheduled to be the chief guest for the occasion.

The opposition had rejected the disqualification of the four former PPM members as an example of the “manipulation” of the judiciary by the administration of President Abdulla Yameen.

With the aim of holding a parliamentary session, members of the four-party opposition alliance marched to the parliament’s locked gates, which had been cordoned off by a ring of police and army soldiers. There were also opposition supporters who were trying to breach the siege by security personnel.

All MPs who got inside are inside MDP PG room in the parliament. pic.twitter.com/CeWQyJthMZ

The Maldives opposition leader and former President, Mohamed Nasheed expressed alarm over the actions of the chief of Defence Forces, Major General Shiyam.

In a statement, Nasheed, who is now in exile outside Maldives, said that he was concerned that the army chief “was planning to take over” state institutions and warned about an “imminent coup”.

Nasheed had stepped down in 2012 after he was faced by a rebellion from a section of army and police officers, which the opposition have since described as a ‘coup’.