A tense neighbourhood and China's growing security presence in the Indian Ocean have given India and Malaysia much to discuss. 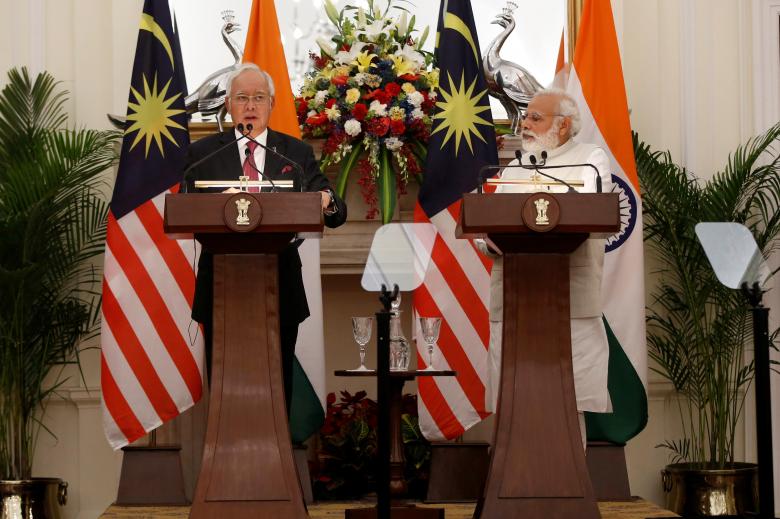 On March 30, Malaysian Prime Minister Najib Tun Razak arrived in Chennai for an official visit following an invitation from Prime Minister Narendra Modi. This was Razak’s third official visit as prime minister and an important one at that, given the number of agreements that were signed. Razak next visited the capital, New Delhi, on March 31, proceeding to Jaipur on April 2 following an invitation by Rajasthan’s chief minister, Vasundhara Raje Scindia.

The Malaysian delegation’s six-day official visit to India focused on the close political and economic ties between the two nations. Razak had written exclusively for the Hindustan Times, the purpose of his visit and how the two nations share similar trade, economic and personal or cultural affinities over the decades. But what is really behind Malaysia’s official visit to India?

Razak clicking a selfie with Tamil superstar Rajinikanth at his home in Chennai indicates Malaysia’s conscious attempt to bring ‘the people’ of both countries to a certain level of understanding – that the two nations share close cultural ties, besides trade and economic ties. It was also seen as a move to appease the Tamil community in Malaysia, to suggest that the friendly and familiar relationship between the Tamil communities in both India and Malaysia remain strong. For Modi, too, the appeasement of the Tamil community is a positive political move in the direction of winning over more adverse political opinions, which have historically gravitated to the Communist left (Marxist) in south India.

Jaideep Mazumdar, joint secretary in charge of Malaysia-India diplomatic relations at the external affairs ministry, confirmed that the two countries discussed $5 billion-worth two-way investment during Razak’s visit, in a bid to boost economic linkages between Asia’s third largest economy (India) and one of the fastest growing economies in Southeast Asia (Malaysia). This shows that India is keen on building stronger political, economic and strategic ties with Malaysia, seen as a moderate Muslim nation with a population of approximately 28 million. It also shows that Indian firms have moved to Malaysia in a big way, making it a base to do business with other ASEAN nations. Malaysia has invested about $6 billion for projects in India, and Indian investment in Malaysia amounts to about $2.5 billion. In the defence and security arena, Indian pilots operating Sukhoi-30 frontline fighter aircraft trained in Malaysia between 2008 and 2010. The two countries held their first military exercises in 2012 and their first naval exercises in 2016.

India and Malaysia signed a memorandum of understanding on defence cooperation in 1993 and a Malaysia-India Defence Cooperation Meeting (MIDCOM) was established under its framework. Several MIDCOM meetings and reciprocal visits of high level defense personnel have taken place since. India’s ‘defence diplomacy’ towards Malaysia focuses on developing an integral defence relationship through joint military exercises, training defence personnel and trade in military equipment. India has offered to train Malaysian defence personnel on Sukhoi fighter planes and Scorpene submarines and two Indian naval ships, INS Delhi and INS Kora. India had also participated in the Langkawi International Maritime and Aerospace Exhibition in Malaysia. India and Malaysia are also participating in the MILAN naval exercises along with Bangladesh, Sri Lanka, Indonesia, Singapore and Thailand. Defence cooperation with Malaysia is in India’s strategic and economic interest.

Compared to Malaysia’s relations with India during the administration of Prime Minister Tun Mahathir Mohamed, Razak sees a new and improved relationship, with a new ‘high’ in the areas of infrastructure development, student exchange and the like. The two nations also agreed to revitalise the Comprehensive Economic Cooperation Agreement (CECA), as well as to be more proactive in the Regional Comprehensive Economic Partnership (RCEP).

Stressing the need for freedom of navigation and overflight in the South China Sea, Razak and Modi reiterated their resolve to fight the scourge of terrorism afflicting the world and the two countries in particular. The joint statement issued by the two sides recognised that terrorism in all forms and manifestations constitutes one of the most serious threats to peace and stability in the region. The joint statement further said that there should be no glorification of terrorists as martyrs, in a clear signal to Pakistan, which has previously praised Hizbul Mujahideen commander Burhan Wani.

Overall, the two leaders unanimously declared that bilateral relations are at an all-time high. Using the 60th anniversary of Indo-Malay relations as a strong focal point, Razak vowed that Malaysia would continue to work closely and enhance cooperation with India to ensure that both nations, and the region, would remain peaceful.

However, like most official dignitary-level visits and meetings, what is reported of the diplomatic exchange between the leaders barely scratches the surface. There is more to Razak’s visit to India.

Domestically, the repercussions are enormous. During this somewhat volatile political situation in Malaysia, there is a need to apply a holistic approach to governance. A large chunk of this governance involves placating and seeing to the needs of the different races within Malaysia – including the very influential and visible Indians, most of whom are Tamil, linguistically, religiously and culturally. Furthermore, this holistic approach to diplomacy takes into consideration two other important aspects of strategic thinking: first, Razak’s decision to visit India is closely tied to the geopolitical competition between India and China in the Indian Ocean Region; second, Malaysia’s stance as a small power juxtaposed with the major powers of India and China. Both Razak and Modi realise the threat of an encroaching China into the Indian Ocean – but this point was not mentioned during talks between the two leaders.

The Indian Ocean region provides critical sea trade routes that connect the Middle East, Africa and South Asia with the broader Asian continent to the east and Europe to the west. A number of the world’s most important strategic checkpoints, including the Straits of Hormuz and Malacca, through which 32.2 millions of barrels of crude oil and petroleum are transported per day — more than 50% of the world’s maritime oil trade — are found in the Indian Ocean region, which itself is believed to be rich with energy reserves. It is no surprise that Razak’s recent visit focused discussions on defence issues as well. Beijing’s regional vision, backed by $40 billion of pledged investment, outlines its One Belt, One Road (OBOR) plan — combining the revitalisation of ancient land-based trade routes, the Silk Road Economic Belt, with a Maritime Silk Road.

China’s ties with regional states have deepened, including the influx of Chinese capital into construction projects in Bangladesh, Myanmar, Pakistan and Sri Lanka. Since counter-piracy operations were launched in 2009, Beijing has become increasingly active in the region. China has also undertaken efforts to modernise its military, particularly its naval deployment capabilities to protect overseas interests like personnel, property and investments. Experts also argue that Beijing’s forays into what is at times described as India’s neighborhood are driven by China’s excess capacity challenges — incentivising Chinese firms out of domestic markets to compete in and open new markets abroad.

Furthermore, China-India relations are fraught, coloured by historical disputes and the threat India perceives from China’s rise. Tensions have persisted despite overtures by Chinese President Xi Jinping and Modi. Much of the friction stems from a longstanding dispute along a 2,400-mile border in India’s Arunachal Pradesh and China’s Tibet, and the legacy of the 1962 Sino-Indian War along the Himalayan border.

To sum up, Razak’s visit to India was clearly more than the signing of MOUs worth billions of dollars. Both nations reiterated the importance of fighting terrorism, betraying a smoke screen for a deeper undeclared ‘war’ against China’s strategic encroachment into the Indian Ocean region. Both India and Malaysia made it a point to say that they should identify, hold accountable and take strong measures against states that encourage, support and finance terrorism. The message was meant for Pakistan, although it was not explicitly named. Indirectly, China is also implicated as a major power which strategically supports Pakistan and other littoral states in the Indian Ocean, such as Sri Lanka, Bangladesh and Myanmar.