The death of Liu Xiaobo is both an occasion to mourn a man who fought for democracy and one to think about the nature of protest and dissent. 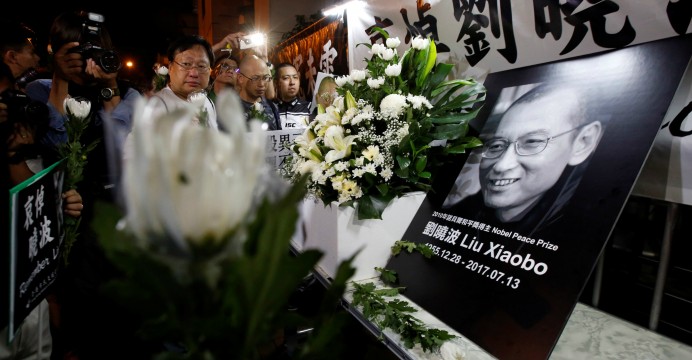 The death of Nobel laureate Liu Xiaobo (1955-2017) is a grim reminder of the power of the Chinese state and the limits it imposes on political dissent. Liu died of cancer, but his long incarceration was because of his social activism.

The immediate cause that sent Liu to prison was that he had helped draft the so-called ‘Charter 08’ in 2008 calling for an end to one-party rule, the first such demand since 1949. Liu was tried and charged with subversion of state power in 2009 and imprisoned for 11 years, and his political rights curtailed for another two years, for this frontal attack on the monopoly of the Communist Party of China. Across the globe, there were calls for his release: from the US, the EU, the UNHCR. Politicians, writers, scholars and other public intellectuals spoke and petitioned too, but to no avail. In 2010, nominated by a galaxy of international leaders – Vaclav Havel, the Dalai Lama, Desmond Tutu and others – Liu was awarded the Nobel Peace Prize for his non-violent political struggle. Not allowed to attend the ceremony to accept the award, his presence was marked by an empty chair.

Liu was suffering from cancer and had been moved to a hospital. There were calls for moving him outside the country for treatment, but the government was unrelenting. Liu has joined a growing list of martyrs to the cause of democracy not just in China but across the globe. The Xi Jinping government’s policies have been marked by increased authoritarianism and intolerance of dissent. Most recently, President Xi, during the Hong Kong anniversary celebrations of the handover, warned Hong Kong pro-democracy protestors that challenging the power of Beijing was a red line they couldn’t cross.

Xi’s government has dealt with political dissent with an iron hand, such as in the case of the political cartoonist Jiang Yefei. Jiang had fled China in 2008 but continued to draw cartoons critical of Xi despite warnings. The Chinese government reportedly abducted him, and another Chinese dissident Dong Guangping, on November 13, 2015 from Thailand despite the UN recognising them as refugees and the Canadian government granting them both asylum. Whether abducted or deported, the Thai government’s handing over of these dissidents to China, as well as 109 Uighur Muslims in July 2015, came under criticism. It spread fear among refugee communities from neighbouring states that their position was not safe. China’s willingness to use its economic clout to pressure governments and bring back dissidents to punish created a climate of fear.

But is China simply an authoritarian state, intolerant of dissent, or is it changing, even though gradually, to one where the rule of law is beginning to take hold? It is true that political prisoners in China face maltreatment, isolation and torture; their families and friends are targeted, and lawyers who fight for them are harassed or implicated in cases. But looking at it from an Indian perspective, this raises certain important questions. Even though India is a democracy with the rule of law in place, practice often does not live up to theory and the delivery of justice continues to be a problem. 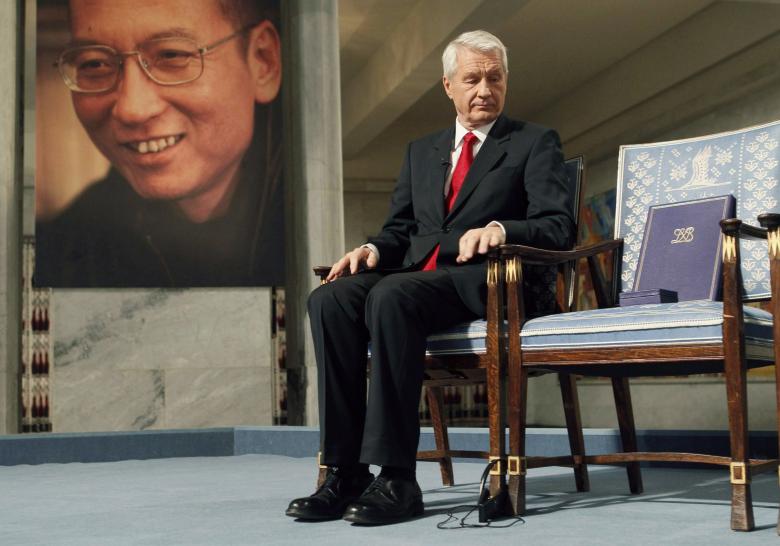 Chairman of the Norwegian Nobel Committee Thorbjoern Jagland looks down at the Nobel certificate and medal on the empty chair where Nobel Peace Prize winner Liu Xiaobo would have sat, as a portrait of Liu is seen in the background, during the ceremony at Oslo City Hall December 10, 2010. Credit: Reuters/Heiko Junge/Scanpix Norway/Pool

A more nuanced understanding of the Chinese situation would both enrich our understanding of China, which either appears to be a model of economic growth and development or an aggressive totalitarian state bent on world domination, and show more similarities than we might care to admit. China is not just globally important, but a neighbour with whom we need to engage at various levels.

The death of Liu is a tragedy for his wife, the poet Liu Xia, his friends, for China and for the world. However, his image as an almost-Gandhian figure is exaggerated. Liu joined the student movement in Tianamen and later, through his writings and protests, mounted a critique of both the supporters of socialism and class struggle, and the Chinese government’s autocracy. Liu’s political views were controversial. As two Hong Kong-based scholars pointed out in an article in the Guardian in 2010, Liu supported the US wars in Afghanistan and Iraq, in fact all US interventions, as ethically defensible; he blamed the Palestinians and supported Israel; and was an admirer of George Bush for going after Saddam Hussein. But his dream for China was singular: he wanted to make it into a Western country. He was contemptuous of the Chinese national character, dismissing it as spineless, and argued that the only way for the Chinese to become human was to become Western. Not at all like the Gandhi we know.

Are things changing for the better?

That said, Liu’s politics don’t justify an 11-year incarceration: there have been other illustrious supporters of Bush and US interventions, and admirers of Western civilisation. The Xi government, like many in the region, has been enforcing political compliance in many ways, one of which is what some scholars in the 1970s began to call ‘legal authoritarianism’. Law has been used to silence critics and instil fear. Where there is hope is that the law has become the arbiter: both the government and the people have to find justification in law. This has been an important gain, which has allowed legal recourse to many sections of society: political protestors, trade unions, as well as ordinary citizens seeking redress.

The government has came down heavily on certain occasions, such as in the lead up to the 2008 Olympics and during the 25th anniversary of the Tiananmen Square incident, but at the same time free legal aid has increased as well. The government recognises that the law is an important instrument to reduce social conflict and ensure stability. Since 1994, China has built a vast network of institutions and provided funding for free legal aid. Government sources say that these offices handle over four million people annually and 600,000 people benefit from free legal aid.

Can the government’s strategy of allowing the law to work within boundaries be successful? China has a long Confucian tradition of ‘remonstrance’ and ‘petition’. The ideal official in imperial China was one who could speak truth to power, and ‘petitions’ were one way for the common people to have their voices heard. Even rebellion was justified if the ‘mandate of heaven’ had been withdrawn. In modern times, democratic movements developed strong roots and laid the basis for a revolutionary upheaval of society to realise a just order. Regardless of the subsequent problems, this history is still very much part of today’s China: the people are heir to popular traditions of protest and continually pressure the government to increase the space for political debate and accountability. However, regular crackdowns on high-profile cases and other extra-legal pressure work to create a climate of fear. How this will develop is a matter of debate.

Scholars such as Eva Pils, a leading authority on human rights activism, have helped to chart this complex legal environment. Pils quotes the well-know human rights lawyer Teng Biao, who says that if you don’t trouble the government too much your safety is ensured – but if you keep retreating, he says, then you will be left deaf and mute. Arguing that while compromise may be tactical you have to take clear positions sometimes.

The death of Liu is both an occasion to mourn a man who fought for democracy and one to think about the nature of protest and dissent, not just in China but in India as well. China is not a distant ‘other’, we confront similar problems and greater dialogue would enrich us both. The idea of ‘subverting the state’ has become a powerful tool for governments to suppress democratic dissent. In a climate where strident nationalism is sweeping the globe, the tag ‘anti-national’ is increasingly deployed to silence reasoned argument. Liu will be remembered because he opposed these ‘red lines’ that render the people ‘deaf and mute’.