Letters from South Hebron: The Struggle to Save Susya 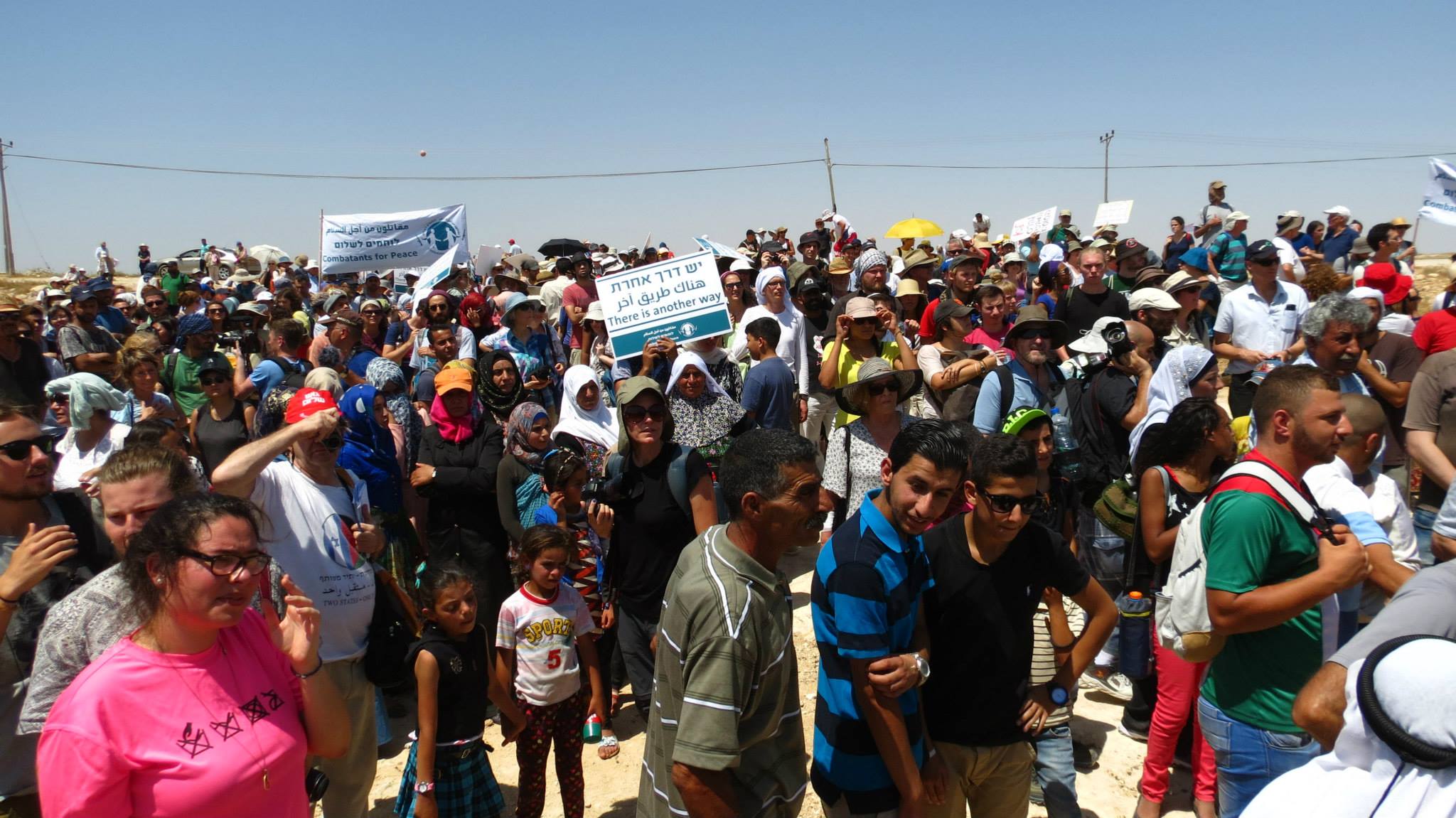 Demonstration of Israelis and Palestinians agains the demolition and transfer of Susya. Credit: Taayush

From early morning, when the air is still almost cool, until noon, when the sky is aflame, we work on the rock-and-dirt path to Bi’r al-‘Id. First you gather the medium-size rocks from the side of the road and the hill and arrange them in even rows; then you gather many bucketfuls of gravel and sand, scraped with rakes and picks from the caked surface of the soil, and pour this over the rocks; then you cover it all with earth carried in buckets from wherever you can find it. You split open the biggest boulders on the path with a pick-ax or heavy hammer. It took us three and a half hours to even out 15 meters or so of the path. It’s good work. As Yair says with a smile, it has a Zen-like quality, this endless filling of buckets and carrying them over the thorns and stones uphill. Besides, it’s something good to do during Ramadan, when everyone is fasting and there’s little activity of the shepherds and almost no agricultural work to be done.

It’s a long path to Bi’r al-‘Id, just barely passable today by vehicles except for the patches that we’ve upgraded like this over the last years. We calculate that if we work like this for another two hundred days or so, the whole length will be finished. By then, I say in gloomy jest, the Occupation will surely be over. Meanwhile, Bi’r al-‘Id exists, a miracle, a source of pride, for here, at this tiny point overlooking the desert under the shadow of the settlement of Mitzpeh Yair, we helped not only to stop the remorseless movement of expulsion but even to reverse it, for now.

As I work, fried by sunlight, I think mostly of Susya, not far away. We know for sure that very soon, probably between the ‘Id festival at the end of Ramadan and the sitting of the Supreme Court on August 3rd with Susya on its agenda, the State of Israel will demolish at least some of the Susya homes. They have what they must consider a window of opportunity; the bulldozers are already sitting nearby. For years this demolition-cum-expulsion has been threatening to happen, for years we’ve managed to stall it by a fierce campaign with effective international pressure, but now, under the new government, we’ve reached the point of destruction, unless some of you can mobilize someone out there. We don’t yet know how many homes they will liquidate in the first round. Perhaps “only” a few. I am confident that Susya will somehow survive, but first there will be sorrow and horror, and the Israeli settlers in the settlement they, too, call Susya, stealing not only the land but also the name, will rub their hands in glee.

There can be no doubt that we are awaiting a crime, a crime against humanity, a crime that undermines the integrity, if that is the right word, of this state, a crime against the conscience of every Israeli, whether they know it or not, whether they have a conscience or not. Here is what Vladimir Jankélévitch (a new hero of mine) has to say about that: “The moral conscience is not a particular thing in the mind like the colour blue, the association of ideas, or the love of women. The moral conscience does not exist. But we discover our conscience proper on the day when certain actions that are legal or indifferent or permitted by the police inspire in us an insuperable disgust”. Conscience, apparently, is mostly a potential capable of being activated, if we are lucky, under special, or maybe even ordinary, conditions—thus capable of becoming real. But for me, today, thinking of Susya, this goes well beyond disgust. My moral conscience, such as it is, seems to inhabit the pores of my skin and my ability to love. It comes from a site where the word “moral” has not yet been born, and only from that dark place does it reach toward my mind. I know next to nothing about morality, but like all other persons, I know about pain. As for the action in question, it is not merely permitted by the police but initiated and actively pursued by the government and abetted by the courts.

Susya is not some theoretical entity somewhere on a map that is itself an abstraction. Susya is the home of Nasser and his family, including his baby daughter; of the large Nawaja’ clan, many of whom we know well from years of visits and protests and summer camps and meals and celebrations and nights in the desert; of the wind turbines that Noam and Eldad put up years ago, and of the wells we have cleaned of their ancient silt; of several friendly and idiosyncratic donkeys and dogs, and of the olive trees we have harvested together with our friends; home to the winter winds and the summer sun and the special smell of the rocks and the thorns. Suppose the soldiers throw Nasser and his wife and children, including the baby, out of their home and mow it down with the bulldozer. The Nawaja’ family will live, they will of course rebuild, as they have before, but I, for one, I promise you, will never forgive.

States, I suppose, are routinely cruel to their citizens. In the case of Israel, the Jews are routinely cruel to Palestinians. For nearly five decades, the Occupation has poisoned us all with its lunatic bureaucracy, its violent settlers and soldiers, its delight in stealing land, its innate racism, its pervasive rule of terror. All this we know, it is nothing new. What is new is the scale of what they want to do to Susya, and after that—who knows to whom? It is hard to think about wickedness inflicted on millions, but it is not hard at all to imagine wickedness directed at a family I know and love.

So for me, waiting for the crime to happen, waiting to see the state torment and injure and violate my friends, driving them from their homes and their ancestors’ lands, driving them out with guns and patronizing words about what the state thinks is good for them, for me there is a question about what a decent human being can or must do in such a time and place, and what a decent person can and must say in words, because words matter, too. Perhaps some of you, my readers, know the answer.