At Least 25 Killed in Attack on Egypt Church

This was the latest assault on a religious minority in Egypt that has increasingly been targeted by Islamist militants. 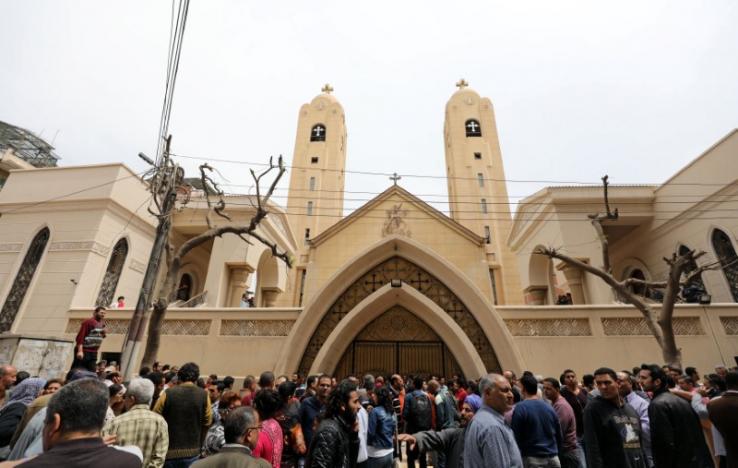 Egyptians gather in front of a Coptic church that was bombed on Sunday in Tanta, Egypt, April 9, 2017. Credit: Reuters/Mohamed Abd El Ghany

Cairo: At least 25 people were killed and 60 injured on Sunday when an explosion rocked a Coptic church in Egypt’s Nile Delta, state television reported, the latest assault on a religious minority that has increasingly been targeted by Islamist militants.

There was no immediate claim of responsibility and the cause of the blast, just one week before Coptic Easter and the same month that Pope Francis is scheduled to visit Egypt, was not known.

The bombing in Tanta, a Nile Delta city less than 100 kilometres outside Cairo, comes as Islamic State’s branch in Egypt appears to be stepping up attacks on Christians and threatening them in messages blasted out to followers.

In February, Christian families and students fled Egypt’s North Sinai province in droves after Islamic State began a spate of targeted killings there.

Those attacks came after one the deadliest on Egypt’s Christian minority in years – before today – when a suicide bomber hit its largest Coptic cathedral, killing at least 25. Islamic State later claimed responsibility for the attack.

Eyewitnesses to Sunday’s blast described a scene of carnage.

“There was a huge explosion in the hall. Fire and smoke filled the room and the injuries were extremely severe. I saw the intestines of those injured and legs severed entirely from their bodies,” Vivian Fareeg told Reuters by phone.

“There was blood all over the floor and body parts scattered,” said another Christian woman who was inside the church.

A shift in ISIS’s tactics, which has waged a low-level conflict for years in the Sinai peninsula against soldiers and police, to targeting Christian civilians and broadening its reach into Egypt’s mainland is a potential turning point in a country trying to prevent a provincial insurgency from spiralling into wider sectarian bloodshed.

Egypt’s Christian community has felt increasingly insecure since Islamic State spread through Iraq and Syria in 2014, ruthlessly targeting religious minorities. In 2015, 21 Egyptian Christians working in Libya were killed by ISIS.

Copts face regular attacks by Muslim neighbours, who burn their homes and churches in poor rural areas, usually in anger over an inter-faith romance or the construction of church.

Tanta was also the site of another attack earlier this month, when a policeman was killed and 15 were injured after a bomb exploded near a police training centre.