Photos of the damage, which took place because of thunderstorms, went viral on social media over the weekend. 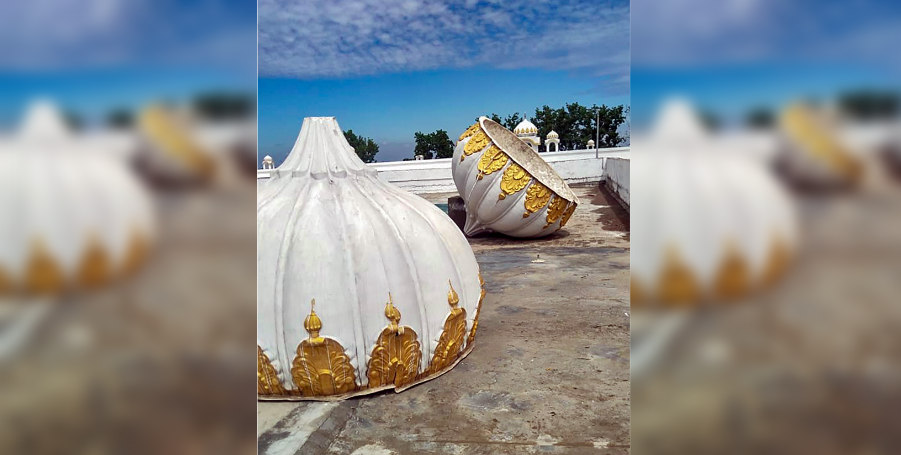 Lucknow: At least eight domes of the newly renovated Gurdwara Kartarpur Sahib in Pakistan fell apart due to a thunderstorm, raising questions over the use of poor quality material for the extension of the revered Sikh shrine as India took up the matter with Islamabad and demanded that the damage be urgently “rectified and remedied.”

Photos of the collapsed domes and other damage to the shrine due to the inclement weather went viral on social media over the weekend.

In November last year, the two countries threw open a corridor linking Dera Baba Sahib in Gurdaspur in India and Gurdwara Kartarpur Sahib in Pakistan, in a historic people-to-people initiative.

Kartarpur Sahib Gurdwara is located in Pakistan’s Narowal district across the river Ravi, about four kilometres from the Dera Baba Nanak shrine. It is the final resting place of Sikh faith’s founder Guru Nanak Dev.

Questions are being raised over the sub-standard material used for extension of the Kartarpur Sahib ahead of the corridor’s opening.

The domes, which are generally made of cement and iron, were erected using fiber sheet as the government seemed to have compromised in construction to meet the November 9 deadline to open the corridor.

According to a Pakistani official, at least eight domes were damaged and fell apart due to strong winds and rains late on Friday night.

“The domes were made of fiber that is why they were dislodged by strong winds,” he said.

The Indian government took up the issue with Pakistan, saying the damage to the structures in the gurudwara has caused “great consternation” among the Sikh community.

“India has urged Pakistan that in deference to the sentiments of the Sikh community, the deficiencies which led to the damage to the newly constructed structures be urgently rectified and remedied,” said a source.

However, the Pakistan government has claimed that it has repaired “the damage caused by winds and rains at Kartarpur Sahib within hours.”

In a statement, the Foreign Office spokesperson later said in Islamabad the domes were repaired within 24 hours of the damage.

The spokesperson also said the Indian side had raised the issue of damaged domes with Pakistan through a Note Verbale, but the domes had already been repaired before the Indian Note Verbal was received.