ISIS May Be Down, But It's Not Out Yet

The caliphate may be collapsing, but ISIS still poses a threat, not least because of its spread to South and Southeast Asia and foreign fighters returning to their home countries.

A resident drives past a building with graffiti in Marawi City, Philippines. Credit: Reuters 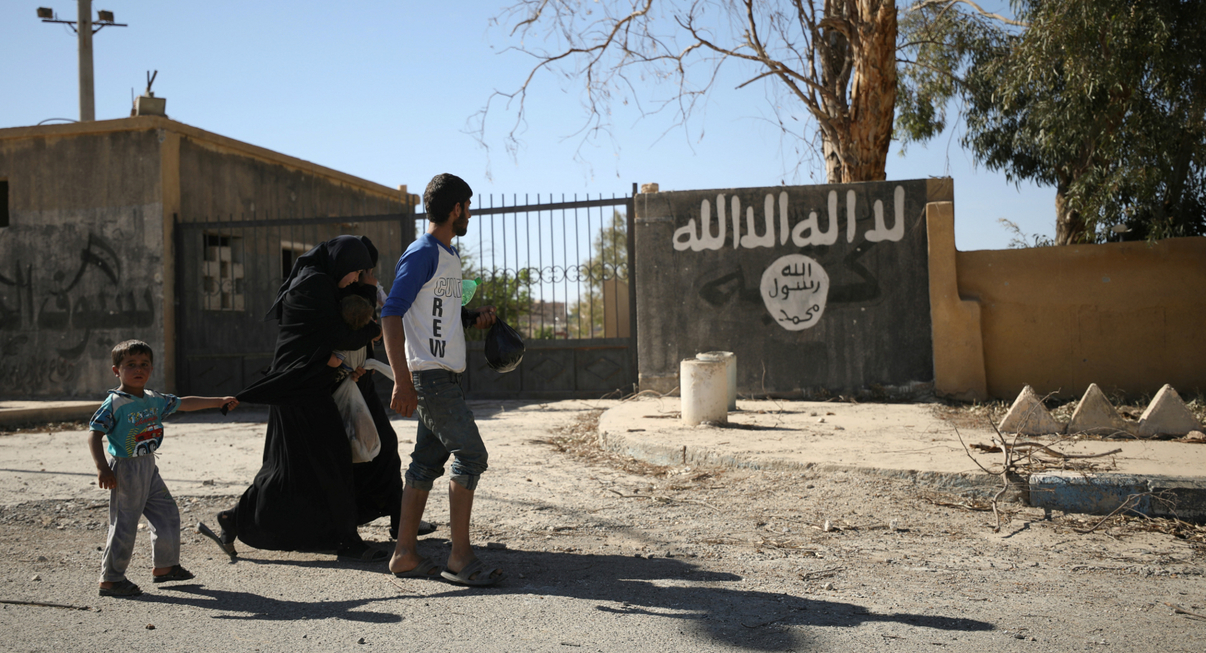 Image of ISIS flag on a wall in Raqqa. Credit: Reuters

ISIS’s so-called Islamic caliphate has survived for over three years and is still going despite the collapse of its bastion Raqqa, although it is now mostly confined to the oil-rich province of Deir Ezzor in Syria bordering Iraq. Under the leadership of Abu Bakr al-Baghdadi, ISIS progressively extended shades of its caliphate from Iraq and Syria to the Philippines in the east, and Yemen and Sub Saharan Africa in the west. The group has recruited killers and assassins from over 100 countries. And it perfected the shock-and-awe tactic.

Operation Inherent Resolve, a US-led international armed coalition of 69 countries, has taken on ISIS, with US defense secretary James Mattis vowing to “annihilate” ISIS so that “foreign fighters do not survive” to return home. ISIS is now in gradual decline, bu its aura is intact. The defeat of ISIS at Raqqa and Marawi in the Philippines is just a symbolic demise. So what is the future of Baghdadi and his caliphate?

The decline of the ISIS brand is also partly due to the dwindling dollar flows. At its peak, the ISIS treasury was said to hold upwards of $2 billion, an amount no terrorist organisation has ever had. The deep pockets enabled the group to make inroads into the Afghanistan-Pakistan border areas, where higher salaries offered to fighters from other groups led to a switching of sides, to create the ‘Wilayat Khorasan’. With foreign fighters may be returning to Europe, Africa and Asia from Syria and Iraq, the group’s ideological and institutional roots are unlikely to wither away.

The US counter terrorism czar Nicholas Rasmussen has said that after losing physical territory, ISIS will turn into a “covert operation” capable of undertaking terrorist acts across the world. He stressed there was no direct linkage between ISIS territory in Iraq and Syria and the group’s capacity to inspire external attacks. Regardless of its ultimate defeat on the battlefield, ISIS will be able to recruit worldwide and, according to Rasmussen, revert to its earlier incarnation as al Qaeda in Iraq. He added that winning on the battlefield was a necessary but insufficient step to eliminating ISIS threats to US interests. In her new book Jihad & Co.: Black Markets and Islamist Power, Aisha Ahmad says ISIS will morph into an insurgent group indulging in hit and run attacks that will reduce the appeal of their brand. Ahmad contends that ISIS will lose its brand appeal with the loss of real estate and resources.

One aspect often left out of the conversation is that ISIS has taken root in Afghanistan, Pakistan, Bangladesh and the Philippines. In fact, most countries habitually deny any presence of the group. In May, about 600 armed extremists flying ISIS flags occupied Marawi. Intense fighting continued for months and it was only on October 17 that Philippine troops liberated Marawi after pitched battles involving artillery and air force. About 90 ISIS fighters who had returned from Iraq were part of the resistance. In Marawi, many Mosul tactics were replicated – the use of IEDs, snipers, tunneling and hostages as human shields. ISIS appears to be on the lookout for real estate in the Philippines as a stepping stone to Indonesia, the world’s most populous Muslim country. Anticipating the fall of the self-declared ‘caliphate’ of its East Asia division, the group has sought to militarise the region, including Singapore.

Meanwhile, the real threat from ISIS is to Europe from fighters returning from Syria and Iraq. Of the 5000 Europeans who left to fight for ISIS, about 1500 are thought to have returned. Europe has seen a spate of attacks attributed to or claimed by ISIS in recent years, including lone wolf attacks (Manchester, UK and Berlin) and coordinated attacks (Paris, Brussels). A resident drives past a building with graffiti in Marawi City, Philippines. Credit: Reuters

During a conference of the International Institute of Counter-Terrorism (ICT), Israel, panelists simulated a ISIS meeting to plan an attack against the Vatican with the Pope as the target. ‘Baghdadi’ was heard telling the ‘ISIS Shura Council’: ‘I want to get the Pope’. In September 2015, the ICT had similarly simulated an ISIS plan to strike Belgium within a few months. In reality, the group attacked Paris in November that year. ICT was not too far off the mark with their prediction. This year’s forecast and simulation of an attack against the Pope coincides with the West’s formal declaration of victory – mission accomplished – over the caliphate.

India is not immune to ISIS threats, especially at a time when intolerance against Muslims and other minorities is fast on the rise. With about 100 men and women having left India to fight for ISIS in Iraq and Syria, their return as the caliphate falls has to be monitored. Deradicalisation programmes, as well as those on preventing violent extremism and radicalisation, have to be updated and implemented with dispatch. Underplaying ISIS is one thing; living in denial is quite another and not the answer.