Trump Just Dropped the Mother of All Bombs – On International Law

By creating a “hub and spoke” model to counter international terrorism, the US today has a veto on its legal regime, its proscribed actors and use of military force. 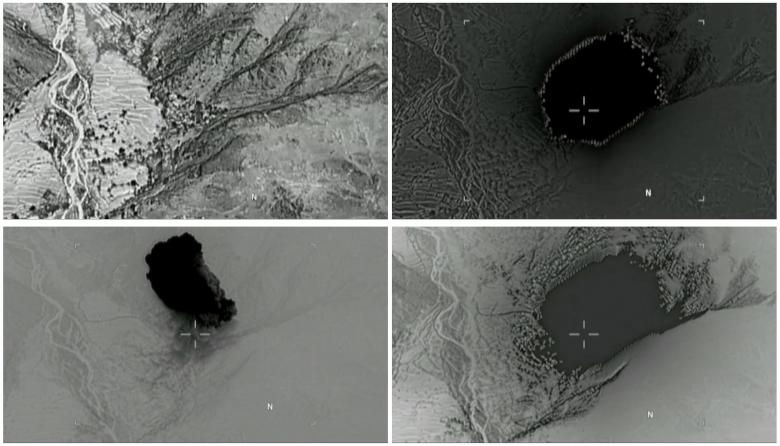 A combination of still images taken from a video released by the U.S. Department of Defense on April 14, 2017 shows (clockwise) the explosion of a MOAB, or "mother of all bombs", when it struck the Achin district of the eastern province of Nangarhar, Afghanistan, bordering Pakistan where U.S. officials said a network of tunnels and caves was being used by militants linked to Islamic State. U.S. Department of Defense/Handout via REUTERS

The GBU-43/B Massive Ordnance Air Blast – known as the “mother of all bombs” – that the United States dropped in Afghanistan on April 13 may have taken aim at caves allegedly sheltering ISIS militants. But the attack also reflects the carpet bombing of international law by the Bush, Obama and now Trump administrations during their two-decade-long ‘war on terror’.

Through its use of blunt military force on non-state actors in South and West Asia, the US has systematically weakened the restraints that the United Nations Charter imposes on all countries, big and small. The jury is out on the legality of Thursday’s bomb drop – for now, it appears the US informed (and received the perfunctory consent) of the Afghan government, and executed a bombing as part of its ongoing operations against terrorist networks in the country.

US actions against ISIS, whether in Afghanistan, Syria or Iraq, have their genesis in UN Security Council Resolution (UNSCR) 1373, which declared terrorism to be a “threat to international peace and security”. UNSCR 1373 empowered states to combat terrorism “by all means”.

But the international goodwill, legitimacy and indeed, the Security Council imprimatur that has been lent to the ‘war on terror,’ has been misused by successive US presidents, the culmination of which is Thursday’s bombing. This is the first time an MOAB has been deployed by the US. Leaving aside questions that some have raised about whether this was essentially a ‘test’ of the bomb’s military efficiency, its use raises three distinct legal questions:

The first question appears fairly straightforward. The US, through its bilateral Enduring Strategic Partnership Agreement, 2012, and the Security and Defence Cooperation Agreement (SDCA), 2014, with Afghanistan, can lawfully pursue military operations against terrorist safe havens in that country. The SDCA requires the consent of the Afghan government but “acknowledges that US military operations to defeat al Qaida and its affiliates may be appropriate in the common fight against terrorism”.

ISIS may no longer be an al Qaida affiliate – though UNSCR 2253 formally recognises ISIS as a “splinter group” of al Qaeda – but the authorisation of US use of force, in this case, is indisputable. Besides, UNSCR 1373 was enacted under Chapter VII of the UN Charter, authorising the use of military force by member states. The Security Council, despite the raft of Chapter VII resolutions against ISIS, has not sanctioned the use of force against ISIS, but determined the group to be a threat to international peace. Given the sanctions regime against ISIS, its recognition by the Security Council as a global threat and the US’s legal authority in Afghanistan to conduct military operations, its use of force as demonstrated by Thursday’s bombing was arguably permissible under international law.

The US may be able to claim lawful use of force in Afghanistan, but the need to build a sound case for targeting ISIS militants elsewhere remains. As scholars note, the US has been using a mishmash of legal arguments – humanitarian intervention to save the Yazidis, “hot pursuit” of militants retreating from Iraq – to bomb ISIS targets in Syria, given the lack of express sanction by the Security Council.

Unlike Russia, which has the Syrian government’s consent to pursue military operations in its territory, and whose claims of self-defence were strengthened after the ISIS bombing of a Russian civilian aircraft over the Sinai peninsula in 2015, the US has a weaker case for its anti-ISIS operations. This issue has significant geopolitical repercussions because the MOAB bombing is a watershed moment for US military action against the terrorist group outside Iraq and Syria.

Most US military operations against terrorist networks do not satisfy the Caroline test of anticipatory self-defence in international law, which permits states to strike first where the danger faced is “instant” and “overwhelming”. Even if the Caroline test were to be seen as outdated, the US’s invoking of self-defence principles to effect targeted killings and drone strikes has seriously muddied the regime of rights and responsibilities of states under the UN Charter. (In its most egregious form, it appeared as a doctrine of “preemption”, articulated by the Bush administration to justify its unlawful invasion of Iraq.)

Strikes like the bombing in Nangarhar reduce the sovereign authority of the host state to a rubber stamp and do nothing to enhance their counter-terrorism capabilities, weakening the goal of “collective self-defence” under the UN charter. In his landmark speech of 2010 defending the Obama administration’s targeted killing (through drone strikes) of suspected terrorists in Afghanistan and Pakistan, the then US State Department Legal Advisor Harold Koh argued that “the use of lawful weapons systems for precision targeting of specific high-level belligerent leaders when acting in self-defense or during an armed conflict is not unlawful.” The MOAB is neither a precise weapon nor has been deployed in pursuit of any ostensible purpose of self-defence.

The MOAB bombing on Thursday is in line with US President Donald Trump’s campaign promise to “bomb the shit out of ISIS”. However assertive this promise may be, US military operations against ISIS must obey the rules of “necessity” and “proportionality”, whether exercised in self-defence against the group or under the Law of Armed Conflict that applies to its war in Afghanistan. Thursday’s bombing arguably fails to meet both counts.

The collateral damage on civilian lives and property in the province where the bomb was dropped aside, the US has not mounted any credible justification for why such a powerful weapon was used for counter-terrorism measures. The US commander in Afghanistan, John W. Nicholson Jr., suggested the MOAB was the “right munition” to obliterate cavernous tunnels that allegedly shield ISIS operatives in Nangarhar. The effectiveness of a weapon is not a justification for its use since international humanitarian law requires the use of “reasonable force”, and the damage caused must not be “excessive” in relation to the advantage anticipated from it.

Thursday’s bombing is as much a strategic issue as it is about international law. This dramatic event is likely to pose several concerns for India. There are reports that there were Indian militants in the area targeted by the MOAB. If they were combatants, New Delhi is unlikely to feel it has any responsibility towards them, though the US ought to obtain sovereign consent for any targeted killing of Indian nationals. Of course, India also has projects in the province, and if Indian assets have been damaged, the Ministry of External Affairs should  issue a nuanced statement on the bombing itself. In general, however, the government would be ill-advised to allow a precedent for the unchecked use of military force when Indian citizens may be caught in the crosshairs of anti-terror raids.

More importantly, the steady escalation of forceful measures against terrorist networks by the US poses a political dilemma for India. On the one hand, New Delhi views US presence in Afghanistan as necessary to lend stability to the region. On the other, the 16-year ‘war on terror’ has done nothing but concentrate decision-making, firepower and counter-terrorism capacity in the hands of the US. If a region-led solution to Afghanistan’s problems is what India seeks, that goal is now further away and more dependent than ever on changing priorities in Washington, D.C. What’s more, by controlling the method and means of targeting terrorist networks in West and South Asia, major powers like the US and Russia have killed any realistic chance for a multilateral convention on combating terrorism.

Regional allies or partners today see the big powers as indispensable to tackling terrorism, and their support to India-led initiatives like the Comprehensive Convention on International Terrorism will be conditioned by their bilateral relationship with Russia or the US. By creating a “hub and spoke” model to counter international terrorism, the major powers today have a veto on its legal regime, its proscribed actors and use of military force. The US decision to drop a MOAB on Afghan territory is a spectacular visualisation of this reality.