Why a Political Settlement in Afghanistan Will Benefit Indo-US Relations

The continuation of the conflict in Afghanistan weakens US leverage over Pakistan, partly due to a continued dependence on Pakistan for air and ground lines of communication into Afghanistan. 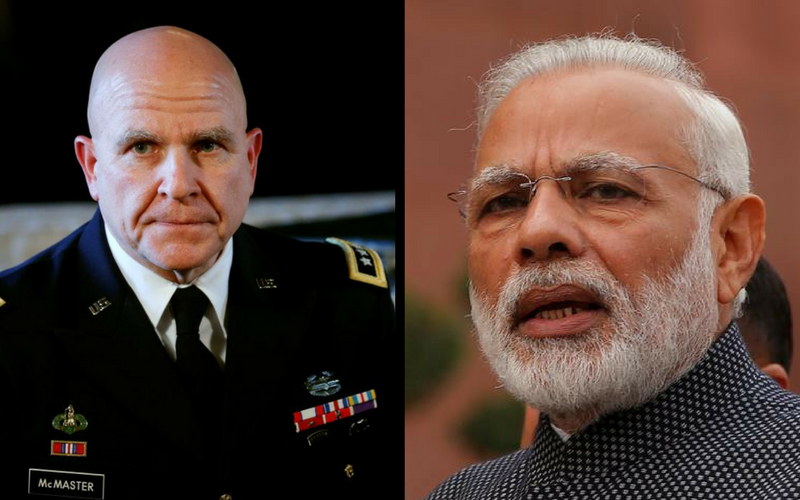 US national security advisor Lieutenant General H.R. McMaster travels to Delhi this weekend (after stops in Kabul and Islamabad) to parley with Prime Minister Narendra Modi and senior Indian officials amidst a major review of American strategy in Afghanistan. The buzz in Washington is that any reinvigouration of the US military campaign in Afghanistan might now be aimed at achieving strategic effects, not merely tactical ones. If that is the case, it suggests that the US could use force not simply to reverse battlefield gains by the Taliban but instead could pursue a lasting political settlement. In a recent op-ed in the New York Times and a public speech at Washington DC’s Stimson Center, former special representative for Afghanistan and Pakistan, ambassador Richard Olson suggested a political settlement might be possible allowing for reconciliation and Taliban entrance into the Afghan state.

This creates new opportunities for India. While India has opposed certain approaches to reconciliation, and some voices in Delhi have even proposed that India contribute troops to the fight, there are good reasons an Afghan political settlement process would better advance India’s interests than a continuation of the conflict.

The main benefit Delhi would derive from a political settlement in Afghanistan is that it would permit a renewed US focus on strategic relationship-building with India. As American policymakers view the rise of China as the primary challenge to stability in Asia, there are strong reasons for the US to further expand its defense ties with India. However, deepening strategic ties requires continuous attention, engagement, and hand-holding as evidenced by former secretary of defense Ash Carter’s numerous visits. Any such potential remains inhibited while the US is pouring political capital, resources, expertise, and of course, its military into Afghanistan. Significant advances in US-India ties (in 2005-06 and 2015-16) seem to coincide with less US concentration on Afghanistan. So long as the United States is committed to a “long war” in Afghanistan with thousands of US troops deployed in harms way, its South Asia policy will be run through a Kabul-first lens.

Furthermore, the continuation of the conflict in Afghanistan is arguably problematic for India because it weakens American leverage over Pakistan. Part of this relates to continued dependence on Pakistan for the air and ground lines of communication into Afghanistan. In a post-settlement world, however, the US would possess greater leverage over Pakistan as it becomes less vulnerable to logistics dependencies. Although the US will still have some core interests with Pakistan, such as fostering responsible nuclear stewardship, a reconciliation deal allows for firmer American reaction to cross border terrorism that Indian leaders have so long sought.

One of the chief concerns raised by India is that a Taliban-influenced Afghan government might allow anti-Indian terror groups to establish safe havens in Afghanistan. These reservations are understandable, but they ignore two key developments that have enhanced Delhi’s ability to contend with this threat – India’s development of standoff strike capabilities and the upward trajectory of the Afghan-Indian security relationship.

The massive growth in Indian security capabilities means that any non-state groups in Afghanistan would be exposed to punitive Indian strikes without escalation risks. Specifically, India is developing subsonic and supersonic cruise missiles that could hit targets inside Afghanistan from airbases near the Indian-Pakistani border. These missiles (Brahmos and Nirbhay), with ranges of 600-1000 km, could give India the ability to credibly threaten retaliation against terrorists and state sponsors (for example, hardline Taliban) deep inside Afghan territory. India might also hold non-state targets at risk with aerial strike capabilities through access to airbases in Tajikistan or air corridors through Iran.

Furthermore, India’s warming ties to Afghanistan may open future avenues for countering non-state groups.  India would likely be able to maintain its relationships with key actors in Afghanistan’s security sector even with a reconciliation deal. These relationships could then conceivably facilitate Indian intelligence-gathering efforts inside Afghanistan, thereby bolstering its ability to strike insurgents should the need arise.

In conjunction with the benefits, there are several reasons to believe India would consider supporting a reconciliation deal in Afghanistan.

First, some Indian analysts privately suggest that despite a hardline public stance on reconciliation, the Indian government may actually be prepared for power-sharing and could countenance a Taliban presence in the Afghan government so long as Kabul is not dominated by a radical Islamist regime beholden to Pakistan. Delhi may insist upon the same conditions as the US concerning violence, the Afghan constitution, and relations with international terrorist groups to assess whether these minimum requirements are being met. Such conditions come across as ironclad, but the Afghan government’s September 2016 deal with Gulbuddin Hekmatyar shows that Kabul and its international partners may be more flexible than is commonly assumed, particularly when it comes to the Afghan constitution, and India might follow suit. Recent research by Michael Semple and Theo Farrell indicates, moreover, that some Taliban commanders may be willing to join a political settlement so long as they are not required to formally renounce their Taliban identity, as this would undermine their legitimacy.

Second, India has experience dealing with the messy outcomes of ending an insurgency. Historically much more comfortable than the West in managing conflict through pragmatic deals, India’s effective management of separatist movements reveals that it can live with outcomes far short of military victory, such as its seventy years of living with the militant “durable disorder” of its Northeast. These experiences collectively imply that Delhi might be willing to tolerate the Taliban as a political force in Afghanistan. India would likely demand that a settlement provide security assurances of some kind, but it would also have its own increasing capabilities and partnerships to hedge against any violation of those assurances.

Finally, India’s response to the 1990s Afghan militancy attests that the foreign policy bureaucracy is not reflexively anti-Taliban. While India ended up backing the Northern Alliance, a strong constituency within the Indian government hedged their bets and also cultivated relationships with pro-Pakistan factions in the early 1990s. Things changed following the Taliban’s ascendance to power in 1996 and the anti-engagement position won out. This episode nonetheless demonstrates that India retained sufficient internal debate and might possess the sophistication to work with a power-sharing Afghan government that includes Taliban.

India can be cognisant of its own limitations and play, instead, to its strengths. Pakistan will always have more influence than India in Afghanistan because of the realities of geography, identity, and the stakes involved. Still, India can help shape the end-state in Afghanistan to its advantage including strengthening the non-Taliban sections in a future Afghan government. Supporting an Afghan political settlement would serve Indian interests by allowing the US to concentrate on enhancing its strategic relationship with India and assert more leverage over Pakistan. The cost India would pay for a settlement could also be less than expected because its strike capabilities could hold terrorist positions at risk within Afghanistan. Thus, it is time for India to take a reconciliation option in Afghanistan seriously.

Sameer Lalwani is a senior associate and deputy director of the South Asia Program at the Stimson Center where Travis Wheeler is a research associate.