India Will Not Cross Red Lines on Generic Drugs in RCEP, but Stay Vigilant, Say Officials

Healthcare watchers are calling on India to resist the free trade agreement’s provisions which could compromise India’s ability to keep supplying cheaper generic drugs to the world. 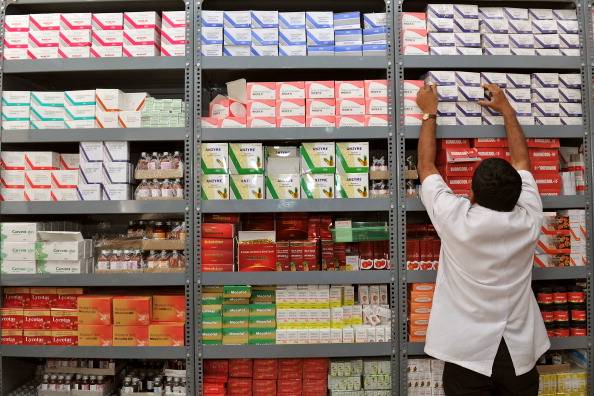 New Delhi: Hundreds of government officials and activists huddle separately in South Korea this week over the Regional Cooperation on Economic Partnership (RCEP) negotiations. They are deliberating the free trade agreement (FTA) which covers issues like pharmaceuticals, agriculture, fisheries, dairy, e-commerce and the service sector. Their decisions will impact nearly 45% of the world, creating the world’s largest free trade bloc.

At least on pharmaceuticals, however, multiple Indian government officials told The Wire that India will not cross “red lines” on intellectual property rights which could affect it’s position as the supplier of cheap generic medicines to large parts of the world. This has been one of the major apprehensions of public health watchers, who have been asking India to resist pressure.

“We know our red lines. We are under no pressure to give in,” a government official said. “The demands on patent enforcement in the RCEP is a red line for us and some other countries,” said another. “India won’t compromise. The TRIPS framework is adequate for drug company’s profits. We have challenged all TRIPS-Plus provisions very strongly,” said a third official. TRIPS is the World Trade Organization’s (WTO) Agreement on Trade Related Aspects of Intellectual Property, and India has been a TRIPS compliant state.

“I think issues are going to drop off the table on patents, such as patent term extensions and data exclusivity. At least these two. Because only Japan and South Korea are asking for it and all the other countries are on the other side. I don’t see it moving,” one of the officials said. These two issues have been particularly contentious for civil society groups who feel they allow pharmaceutical companies to extend their monopolies on drugs, prevent competition and keep drug prices high.

The official also says that these provisions are not part of Indian legislation and “to commit to something which we cannot give under our own law would mean committing to a parliamentary sanction, which we do not have to give at the RCEP forum. Besides, the generics industry and public health angle is far too important for us to just give it up”. India’s agreement to provisions at any global treaty has to be in harmony with the existing domestic laws. Since the RCEP’s demands are conflicting with India’s patent provisions, any agreement at the RCEP would involve an amendment to India’s legislation first – something that officials say is “not even under discussion”.

All of this should go some way in allaying the apprehensions of civil society organisations who gather at every round of the RCEP negotiations with protests.

However, on the role of civil society organisations, one official said, “Stay vigilant. It is important to keep up the pressure and keep everyone on their toes”. This is because seven out of the 16 countries in the RCEP were also members of the now defunct Trans Pacific Partnership (TPP) and these countries had already accepted TRIPS-Plus agendas like patent term extensions and data exclusivity. Through Japan and South Korea, many of these TRIPS-Plus and TPP ideas have found their way into the RCEP. This was made known through several leaked drafts of the RCEP negotiation texts. “Led by Japan, these other countries already have laws in place for TRIPS-Plus provisions. So you never know when things can change,” the official said.

Last week, working groups pored over the textual aspects of the draft RCEP chapters. This week, the trade negotiating committees sit to see if they can move towards any consensus on the various chapters of the negotiations. 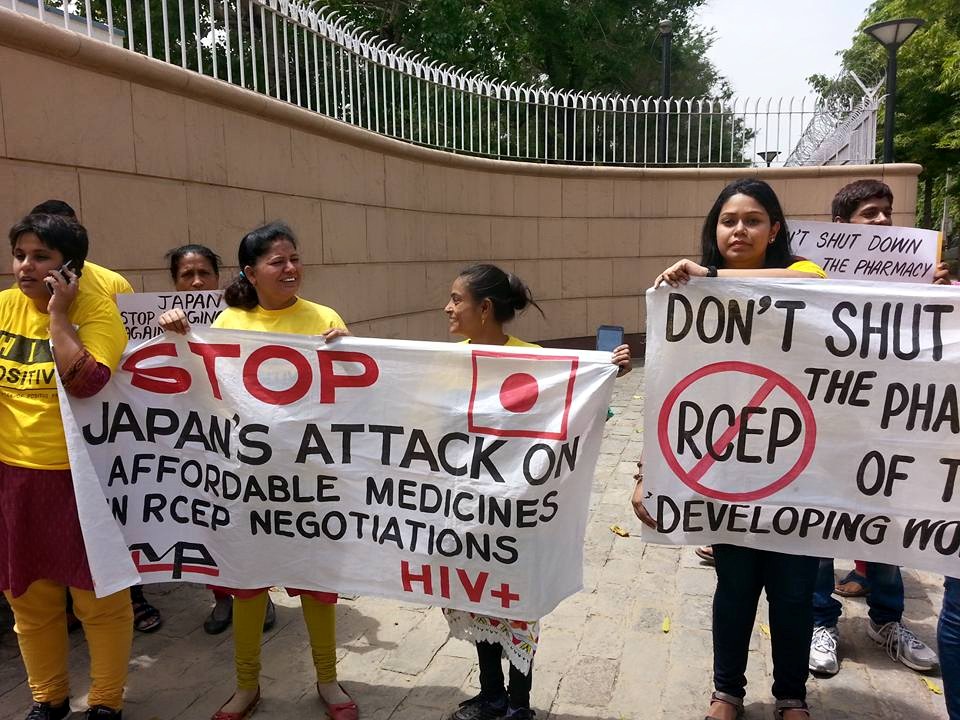 Civil society organisations have gathered at every round of the RCEP negotiations with protests. Credit: Bilaterals.org

How is the RCEP approaching the chapter on intellectual property?

According to two officials, the chapter on intellectual property has been categorised into three types of provisions, based on how likely it is that an agreement can be reached on them. The first category contains technical issues, the second involves policy issues and the third contains provisions which are politically sensitive for different countries. There are more than 90 provisions in this chapter.

“RCEP is not ready for any high ambitions in intellectual property rights. The chapter on intellectual property has not made much headway in the RCEP negotiations,” said one official. “We haven’t discussed even the second category properly and perhaps it will happen at this round. We are not even half way through this chapter,” said another.

The third category will be the most difficult for the RCEP countries to negotiate. It includes the TRIPS-Plus provisions such as patent term extensions and data exclusivity. For India specifically, this third category also includes provisions on Indian traditional medicine and biodiversity whose protection India has been defending at various trade agreements including the RCEP.

“On traditional knowledge, we find ourselves the only voice. What we want at the RCEP is something similar to our own laws. Which is that a patent application should declare that it has taken its resources from a certain country, what that traditional knowledge is, it should have prior informed consent, access benefit sharing agreements and a no-objection-certificate,” said an official.

According to officials, the TPP countries who are in the RCEP are the ones who are also pushing for category three provisions to be taken as a “package.” They are asking for “trade-offs.”

China and India are not keen on the idea of taking category three provisions as a package. Other countries resisting TRIPS-Plus pressures within the RCEP are Indonesia and Thailand.

The issue of “trade-offs” has been a concern for civil society watchers. This is because one of India’s key hopes from the RCEP is in the service sector, to negotiate the provision of business visas in RCEP countries for Indian workers to move for work. This has not been working out in India’s favour so far. On the other hand, India is being pressured to drop tariffs on goods, which many worry will flood the Indian market with cheaper imports, affecting Indian business.

India, thus, has to balance the goods and services dilemma. This has made civil society representatives worry that India might then be forced to agree to a trade-off, with intellectual property perhaps taking the fall.

However, on the issue of trade-offs, two government officials clarify that there will be no inter-sectoral trade-offs made. Goods and services are the only two chapters that are closely related and likely to have some exchanges made.

On goods, for example, India has so far agreed to a formula of “80 plus or minus 6″. India has said that it will drop tariffs for 80% of products for ASEAN countries, plus or minus 6%. This will be done over a twenty year staging period in order to help Indian industry adapt and compete. However, India is hoping to have exceptions in this formula for countries like China, as it already fends off fierce competition from cheap Chinese goods. But ASEAN countries in the RCEP are pushing for a 92% commitment.

“Time is running out for Indian industries to become competitive with global players. With or without an FTA like the RCEP, cheaper and more competitive goods can still flood the Indian market. Any ‘least developed country,’ with whom India has a duty free tariff preference scheme, such as Nepal and Bangladesh, can be used as a route for entry of cheaper goods,” said an official.

India hosted the previous round of negotiations in Hyderabad. During this round, The Wire reported that New Zealand’s negotiator told civil society groups in a stakeholder consultation that the RCEP had so far not pushed beyond anything already agreed upon in the TRIPS. However, he said that RCEP should analyse TRIP-plus provisions as well.

At every round of the RCEP, there has been pressure from civil society groups on their respective governments and also on the combined negotiators to be more transparent, and to not do anything that could jeopardise public interest.

For this round in South Korea, 55 civil society groups globally have asked for time to interact with chapter-negotiators and to make presentations with their ground experience and technical knowledge. “We understand that commercial interests have been invited to share their views with you during previous RCEP rounds and have been given the opportunity to provide longer presentations to chapter specific negotiators,” they wrote. They have asked the hosts in South Korea to give civil society the chance to discuss the chapters on intellectual property, investment, ecommerce and services with their respective negotiators in an open forum. They draw a comparison to discussions at the WTO, which overlap with the RCEP on many issues, but where negotiating proposals are often made public.

Likewise, the international humanitarian organisation Médecins Sans Frontières (MSF) has also issued a press release calling on the RCEP negotiations to “stop pushing for ever-higher levels of monopoly control of medicines through free trade agreements.” MSF says that the RCEP provisions like patent term extensions and data exclusivity on drugs will affect India’s ability to produce them and in turn would block “price-lowering competition in drugs and vaccines that would benefit people across the world.”