From Jadhav to Jindal, It's Clear the Pakistani Military is Feeling More Confident Than Ever

Since the 1960s, the risk of conflict has increased every time both India and Pakistan were at the same level of geopolitical buoyancy. 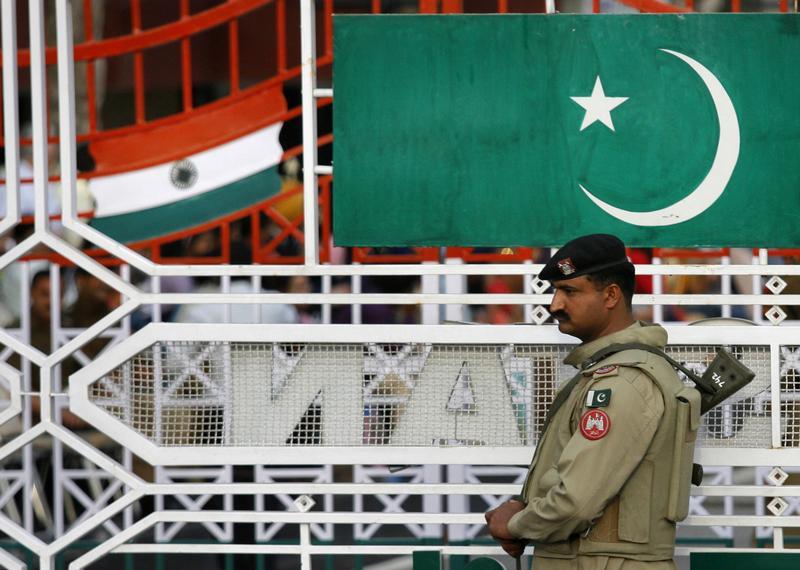 The statement urged “both governments and their security establishments to take all steps possible towards improving relations”. Credit: Reuters/Mohsin Raza

The current state of hostilities between India and Pakistan has grown sharper, more intense and ugly than what it was a decade ago. There is now little formal communication but increased finger pointing. Part of the problem is that the key decision makers on either side look through a different set of lenses.

India and the civilian leaders in Islamabad may desire peace and the resolution of outstanding disputes but this can’t be accomplished through secret negotiations between the two political governments.The Pakistani military has built and popularised the narrative that it alone caters can secure the territorial and ideological integrity of the country and that matters between India and Pakistan may certainly not be resolved by a prime minister whose future hangs in the balance due to a court case accusing him of corruption. The recent announcement by military spokesman Maj. General Asif Ghafoor that he had withdrawn his tweet against the prime minister’s notification regarding the Dawn leaks is in no way an indicator of Sharif now having the power to move forward on India.

Sharif’s decision to send a defiant message through the sudden visit of Indian businessman Sajjan Jindal did not go down well with Pakistan’s establishment and its supporters. Pakistan’s former ambassador to the US, Sherry Rehman, who has a sympathetic understanding of the establishment’s standpoint, tweeted about the visit: “No conspiracy but totally uncool to run ‘backchannel’ talks with one businessman representing both India, Pakistan. That’s the wrong channel”.

No conspiracy but totally uncool to run "backchannel" talks with one businessman representing both India,Pakistan.That's the wrong channel

Rehman’s preference may be for talks through her own track-II channel, the Chaophraya Dialogue – a de facto extension of track-I from both sides since the two governments have no official contacts – but her words did represent the establishment’s discomfort with the Jindal visit.

It was mainly because the establishment did not find it ‘cool’ that the news of Jindal’s meeting with Sharif  in Murree went viral on social media within hours, with the electronic and print media soon jumping in. While Sharif may have managed to arrange for visas to be issued on arrival for the various people – including Jindal – who arrived in Lahore with Prime Minister Narendra Mod for his surprise visit in December 2015, the hows and whys were kept under wraps and publicity was controlled. But Jindal’s visit this time was questioned on many fronts, with some asking whether he may have even visited the hill station without a proper visa. If rules are to be treated as rules, then Sharif could not authorise a visa waiver for his Indian guest.

Of course, the more important question the media asked was what was being discussed or traded. The narrative-generation machine went the whole hog to portray Sharif as a traitor, cutting secret deals behind the patriotic military’s back. Surely Jindal did not come to meet an old friend or cut a business deal. In case it was just business, Sharif’s two sons living abroad could have handled things better. This was also not a meeting requested by Sharif, as he could have found other means of communicating with or meeting Jindal. In case it was something that had to be shared urgently, there appears to be little sensitivity in New Delhi that Sharif no longer has the ability to tame the media narrative the way Modi in India does.

The suspicion was that Jindal might have come to warn Sharif about something or discuss the future of the Kulbhushan Jadhav affair. There is an understanding in the air that since a fairly recently retired colonel of Pakistan’s ISI went missing in Nepal, and has presumably been kidnapped by Indian intelligence, Rawalpindi might talk and even consider an exchange. But this begs the question: can the Islamabad channel work when there is such poor communication between the political head of government and the military leadership?

For Pakistan’s military, another ‘F-16 moment’

However, a far more critical thing that New Delhi seems to miss is that it is using old tactics in a Pakistan with a new psychological environment. Indeed, it is after decades that Pakistan has arrived yet again at another ‘F-16 moment’. Foreign visitors and journalists during the 1980s may still remember sketches of F-16 fighter aircraft on the side of ordinary private buses and trucks chugging along the country’s highways. This popular art reflected not the mere fascination with a plane but the military’s renewed confidence in its ability to fight the country’s enemies and establish security. Even though there was a threat from a far bigger Soviet Union at that time, the fighter aircraft symbolised the cozy strategic alignment with Pakistan’s ally at the time, the United States.

This confidence waned after the 2000s but seems to have returned with the China-Pakistan Economic Corridor (CPEC). In fact, it is stronger than what was felt in the past because, unlike the US which was always concerned about India’s reaction to arms supplies to Pakistan, Beijing’s primary concern is its one-belt-one-road (OBOR) project. Talk to some of the track-II generals and they will also add Russia as part of the new alignment between China and Pakistan. This means a level of confidence that from a historical perspective has always resulted in escalation. Since the 1960s, the risk of conflict has increased every time both India and Pakistan were at the same level of geopolitical buoyancy.

What history also shows is that any form of retaliation from India can at best be limited, especially after the two states went overtly nuclear. While the anger regarding the shooting down of two Indian aircraft during Kargil culminated in the August 10, 1999 shooting down of a Pakistan Navy Breguet Atlantique patrol aircraft, the more recent incursions – described in India as ‘surgical strikes’ – were not deep and could be denied by the Pakistani side. The larger issue is that despite what the two countries may claim regarding their ability to calculate reaction, neither side has any foolproof measurement of how far they can afford to escalate without triggering mutually assured destruction. Despite the frequently expressed desire in Indian policymaking circles to call out Pakistan’s ‘nuclear bluff’, anxieties over how far up the escalation spiral Islamabad can be pushed remain – particularly if an attack is planned deep inside its territory.

While any conflict will generally be bad for the region, Pakistan’s establishment believes it now has a better protective cover with the Chinese doubling down on the relationship. Moreover, an escalation, it is believed, would be equally bad for the Modi government that is no longer steering a very stable India. From economy to social cohesion, India is undergoing a process of turmoil that doesn’t present a very stable image of the country. Furthermore, Modi’s excessive focus on his personality has not helped mend fences with Beijing. Of course, Pakistan’s establishment is engaged in making its fair share of mistakes, which includes worsening relations with three of its neighbours. However, much satisfaction is drawn from the fact that in the end Modi has not succeeded in isolating Pakistan internationally.

The significance of Jadhav

This indeed may be one of the major backdrops of the ongoing Kulbhushan Jadhav affair. Notwithstanding the fact that the world of spies is an elusive one, Jadhav’s identity is totally immaterial in this case. This is about a confident Rawalpindi telling New Delhi that it has found an Indian on it’s soil who seems to have confessed to carrying out acts of terror in Pakistan. The absence of a proper trial or the denial of consular access are issues that will create doubts in the minds of the international community about the case, but then Rawalpindi does not seem to care. If New Delhi could parade Ajmal Kasab as an example of Pakistan aiding and abetting acts of terror inside India, Islamabad now has Jadhav. As for the David Headley kind of testimonies, there is now Ehsanullah Ehsan of the the Tehreek-e-Taliban Pakistan saying that his terror outfit was financed by the Afghan NDS and India’s RAW.

Imperfections in the Jadhav case or Pakistan’s evidence not being watertight do not appear of much concern to the establishment. There is finally a real person in flesh and blood whose image can be flagged to the world to indicate that the two rivals are not far apart – to claim that it is not just Pakistan but India that is not investing in peace. Recently, Lt. General (retd) Tariq Khan, reputed in the West as a liberal soldier willing to gun for the Taliban, said on social media that the Pakistan army not wanting peace was the wrong story – and that it is India which does not want peace in the region. Most voices in the country who may have questioned the handling of the Jadhav issue have quietened down. It is crossing the patriotic line to ask such questions, just like going against the Modi line is considered bad political judgment in India.

The new geopolitical framework compounded with egos and hyper-confidence is a bad recipe for the region. A war is already being fought through the media. However, further escalation is not desirable. This is a time when both sides ought to apply greater caution. We can’t be found sleep-walking to disaster.

Ayesha Siddiqa is author of Military Inc and is research associate at SOAS, University of London South Asia Institute. She can be reached at drayeshasiddiqa.com