Kenya is seeking greater engagement with India in tourism, defence and healthcare, while India is looking to regain its position as Kenya’s number one trade partner from China. 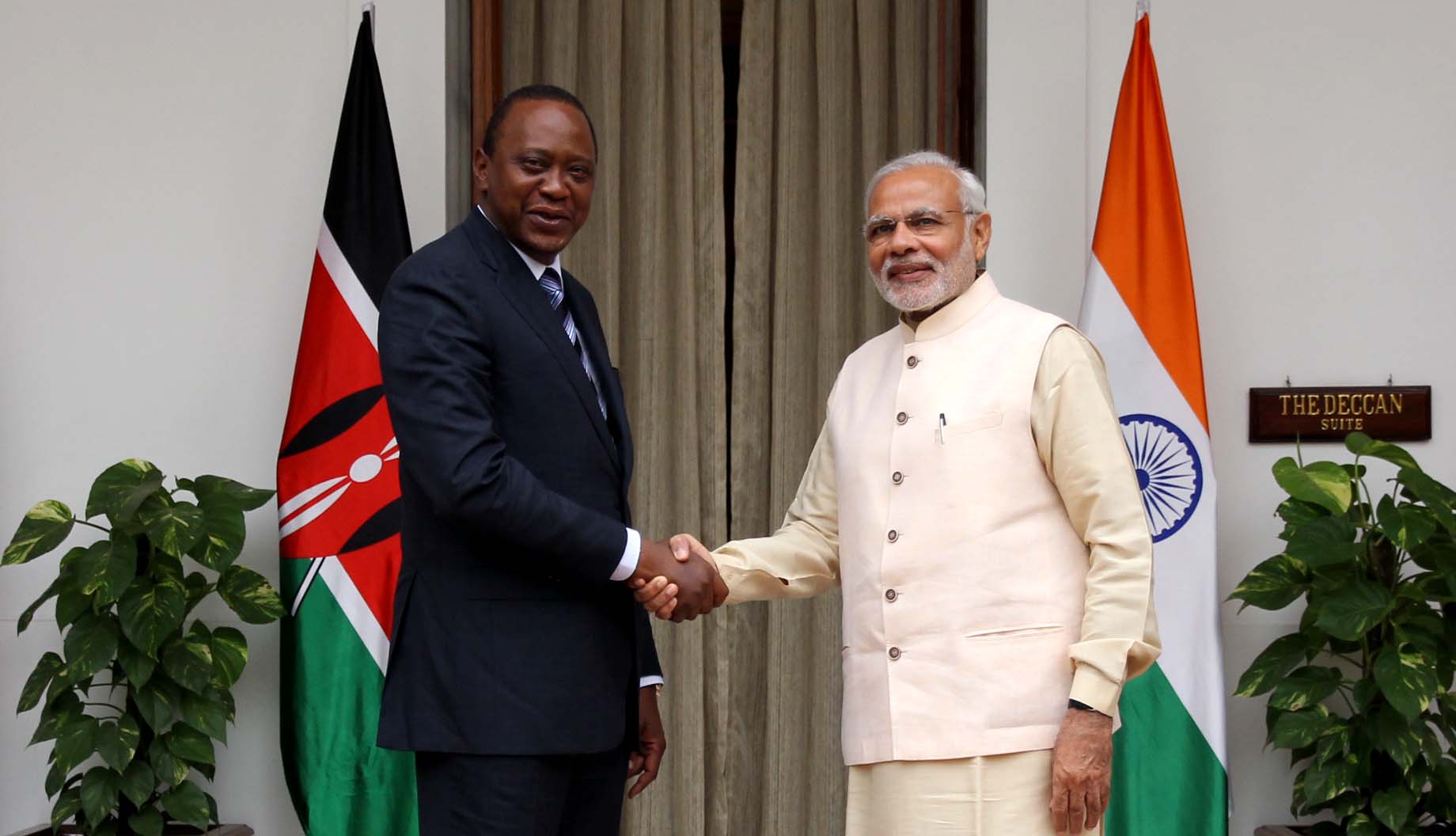 New Delhi: With the Kenyan economy expected to be among the star performers in Africa this year, India is looking at the East African economic powerhouse as a safe haven for investments and a hospitable market, but regaining the top spot for trade from China will be a hard climb.

Kenyan President Uhuru Kenyatta is travelling to India as political tensions rise in Kenya in the run-up to presidential and legislative elections scheduled for August. With the fear of persecution by the International Criminal Court no longer hanging over his head, Kenyatta is likely to stand for president for a second and final term.

When Prime Minister Narendra Modi and Kenyatta meet later this week, it will be their third meeting in in as many years. They first met at the third India Africa Forum Summit in October 2015, followed by a meeting during Modi’s four-nation African safari in July 2016

Kenyatta arrives in Ahmedabad on Tuesday, January 10, before travelling to Delhi for official engagements on Wednesday.

Kenyatta’s participation at the annual Vibrant Gujarat summit is not surprising. A substantial portion of the prosperous Indian diaspora in Kenya, numbering around 80,000, trace their origin to the western Indian state.

The Kenyan leader’s leader top priority is likely to be to seek more access to the Indian market for Kenyan goods, while India is likely to be interested in exploring ways to become its top foreign trading partner, again.

But, with discussions with Kenyatta in Ahmedabad and Delhi taking place as the government scrambles to contain the political fallout from demonetisation, Modi will certainly like to talk about a success of a developing nation in widely adopting digital payments.

Four months before the government spun demonetisation as a move towards cashless economy, Modi had praised the M-Pesa service as a “classic innovation that has empowered millions the world over”. Sources say the African mobile-money sensation M-Pesa, launched in 2007 by Kenyan telecom operator Safaricom, is expected to figure prominently during Modi’s discussions with Kenyatta this time around.

The Modi government’s demonetisation decision, and its subsequent push for a cashless India, banks heavily on incentivising digital transactions and coming up with innovative means of building digital infrastructure cheaply.

Experts say that M-Pesa, which was introduced in India by Vodafone and ICICI Bank in 2014, suffered from mistakes made by the companies involved, as well as onerous government and RBI restrictions. Rivals such as Paytm have targeted digital wallets at urban populations before spreading to tier-2 and tier 3 cities, while M-Pesa sought to do the opposite.

In Kenya, M-Pesa has also constantly evolved: moving from transferring money and using banking correspondents to distribute physical cash to offering financial products such as loans. Mobile wallet companies were for the longest time not allowed to do that in India. The RBI has only in the last two years started making some progress in this regard by handing out payment bank licences to telecom providers such as Airtel and digital wallets such as Paytm.

Government officials, therefore, believe that while M-Pesa may not be able to replicate its Kenyan success here, there are many lessons to be learned on both sides.

An underlying theme of Kenyatta’s current visit to India is the implementation of the assurances made during Modi’s African sojourn.

Officials said agreements to operationalise two lines of credit amounting to $45 million extended during Modi’s 2016 visit for upgrading manufacturing capacity, including to refurbish a textile factory, could be signed on Wednesday.

This is partly to improve Kenyan manufacturing capacity, which could go some way in balancing the yawning trade gap – a major concern for Nairobi. As per Indian government figures, out of around $4.3 billion bilateral trade, Indian exports to Kenya alone account for approximately $4 billion. The major Indian export items are textile yarn, pharmaceuticals, steel products, vehicles and power transmission equipment.

Till May last year, the Mukesh Ambani-owned Reliance Industries largely controlled the import of petroleum in Kenya through its majority stake in the Gulf African Petroleum Corporation (Gapco). But, Reliance sold its entire stake to the Total SA of France for an undisclosed sum in June 2016.

In the Indian context, a major cause for the flight of foreign exchange from Kenya has been its inadequate health infrastructure. Kenya spends over $482 million annually to import drugs, mainly from India. More than 10,000 Kenyans travel to India every year for medical treatment spending nearly $100 million.

Right from his first visit in 2015, Kenyatta has repeatedly called for India’s help in augmenting Kenyan healthcare. When Modi was in Nairobi, he donated a Bhabatron for the treatment of cancer patients, essential medicines and announced capacity building in health sector.

The Indian prime minister had also offered to help set up a full-fledged cancer hospital in Kenya – a promise on which Kenyatta would certainly hold Modi to his words.

Kenyatta would ideally want much more assistance from India in the health sector. He has publicly invited Indian firms to set up manufacturing facilities in his country and make it a distribution hub for generic drugs for the region.

The agriculture and leather industries are other sectors where Kenya is hoping to attract Indian investment to offset the trade imbalance. India has already explored the possibility of importing foodgrains from Kenya to help meet its insatiable demand for pulses.

These are just some of the ways India can regain its position as Kenya’s number one trade partner from China – with the gap growing ever wider.

The sharp rise in China’s trade figures was attributed to “import expenditure for railway construction materials from China”. The state-run China Road and Bridge Corporation is constructing the first phase of the Standard Gauge Railway from Nairobi to Mombasa for $3.6 billion, 10% financed by Kenyan government and the rest funded by a loan from China’s Export-Import Bank.

Kenya’s largest and most expensive infrastructure project is being built almost parallel to the colonial-era metre-gauge track that the British laid out between 1896 to 1901 from Kampala to Mombasa port. This massive colonial engineering project had brought in 32,000 Indian indentured workers, which marked the advent of the diaspora in East Africa.

It is perhaps appropriate that China, the dominant foreign economic actor in Africa, is funding and constructing East Africa’s modern rail link that will finally make the colonial legacy seem like a quaint artefact.

Besides laying rail tracks, China is also constructing roads around the country and building berths at Laamu port. All this is coming at a price, of course. The latest report from the Kenyan treasury calculated that external debt till September 2016 stood at $5.33 billion – China’s stock of Kenyan external debt was 57% or $3.08 billion. This was a rise of 234% from $922.7 million in Chinese debt at the end of Kenyatta’s first year of presidency in June 2014.

“China’s loans compete with loans from traditional donors that attach conditions of good governance and transparency. Uninterested in the politics of the country, China funds major infrastructure projects in Kenya,” said a March 2016 World Bank research paper titled, ‘Deal or No Deal: Strictly Business for China in Kenya?’.

With current account deficit remaining worryingly high, Kenya is considering proposals to widen its tax base and even exporting crude in a low-priced international market in order to service public debts.

While India will find it difficult to win a race with China on financing, Indian money can be stretched in other ways.

In the same World Bank paper, there is an interesting statistic about the number of jobs created by FDI in Kenya. Between 2003-2015, Chinese FDI was only the fifth largest creator of jobs. There have been sporadic protests and attacks on Chinese workers, which media reports state were fuelled by resentment over employment opportunities for locals.

In contrast, Indian FDI was the top employment generator for Kenyans, creating 7422 jobs during the same period. For Kenya, with a large youthful population, accelerating job creation is an essential part of maintaining domestic stability.

Other avenues: tourism, hydrography and security

While Kenya’s manufacturing capacity has floundered due to lack of infrastructure and energy, and red-tapism, the tourism industry had shown promise – but faced setbacks over the last four years due to terror attacks.

India is the third largest source of tourists to Kenya after the US and UK. Unlike those countries, India does not have a tradition of issuing travel advisories, which makes it a steady stream of tourist footfalls. In the first 10 months of 2016, 54,983 Indian visitors travelled to Kenya, an increase of 33% from the previous year.

Beyond economic ties, India is keen to build up a strong security relationship linked to Kenya’s coastal location on the Indian Ocean.

During his 2016 visit to Kenya, Modi had highlighted that “closer cooperation in the field of maritime security occupies an important place in our overall defence and security engagement”.

To build up enough domain knowledge, India has been offering to conduct hydrographic surveys in most of the Indian Ocean littoral and island nations.

In 2014, the Indian Navy conducted surveys along the Manda Bay and Mkokoni Bay. Last year, India apparently proposed the signing of a protocol on hydrography and on the sale of navigation charts to Kenya. While Kenya conducts hydrographic surveys, it has not produced charts of its own territorial waters, which is being done by the UK as per a 2009 agreement.

The Kenyan ministry of lands and physical planning indicated that a decision on a MoU on hydrographic surveys could be taken in the next few weeks.

The growth and consolidation of Islamist group Al-Shaabab in Somalia is a direct threat to the Kenyan economy, especially the tourist industry. The al Qaeda- linked Al-Shaabab has already conducted large attacks inside Kenya, including the killing of 147 people at Garissa University College in April 2015 and 67 people at the Westgate Mall in September 2013. Therefore, Kenya, which has contributed 4000 soldiers as part of the African Union Mission in Somalia to fight the Al-Shaabab, has been keen to have a continuous dialogue on counter-terrorism, drug smuggling and human trafficking.

India had handed over 30 ambulances to the Kenyan Defences Forces (KDF) last year. A Line of Credit to buy defence equipment is likely in the anvil, with India having offered this to the Kenya last year.