Are India, Iran and Russia Parting Ways on Afghanistan?

With the entry of ISIS into the Afghanistan equation, Indian interests have diverged from those of Russia and Iran, who have said that ISIS is a much more dangerous threat than the Taliban. 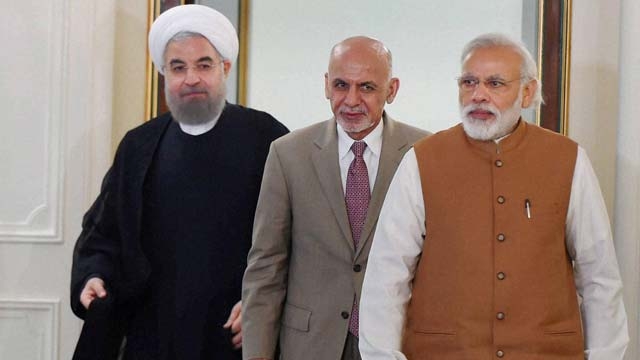 Iran, Russia and India were the big three powers that acted in unison – in supporting the Northern Alliance – to prevent a complete takeover of Afghanistan by the Taliban between 1996 and 2001. This experience of working together to resist the Taliban has largely shaped their actions in Afghanistan since then.

Cooperation between the three states, even in the overt domain, continued over the years and was evident recently as well. In November 2016, India completed the delivery of a batch of four Mi-25 Russian combat helicopters to Afghanistan. Earlier in March 2016, India and Iran signed a bilateral deal to develop the Chabahar port that would provide Afghanistan an alternate access to the sea, bypassing Pakistan. Such instances of collaboration involving Russia, Iran and India have given rise to a belief that these three powers have convergent interests regarding peace and stability in Afghanistan.

It is in light of this history of cooperation that Russia’s statements regarding the ISIS in Afghanistan have caused a stir in India. The Russian president’s special representative to Afghanistan, Zamir Kabulov, went on record saying that the ISIS — not the Taliban — is a bigger threat in the region.

Similarly, Iran continues to make overtures towards sections in the Taliban. Afghanistan’s former intelligence chief, Rahmatullah Nabil, in November accused Iran of supporting the Taliban in order to counter the Daesh threat.

In sharp contrast, India still regards the Taliban and its sponsors as bigger threats to Afghanistan. Earlier this month, the Ministry of External Aaffairs spokesperson said regarding the Taliban, “They have to respect the internationally agreed red lines, give up terrorism and violence, sever all ties with al Qaeda, agree to follow democratic norms and not do anything which will erode the gains of the last 15 years. Ultimately it is for the government of Afghanistan to decide whom to talk to and how.”

So, the question before India is: with the ISIS brought into the Afghanistan equation, have the interests of Russia, Iran and India now diverged in Afghanistan? And, if yes, what are the implications of this development for India’s strategy?

Is there a divergence?

The question of parting ways has two disparate elements: one that involves the Taliban and the other involves the ISIS. On the Taliban question, it is safe to say that there is no major divergence between Russia, India and Iran. All three would settle for any Afghan-owned arrangement that ends the cycle of violence in the country. There are differences, however, in the desired means to achieve this goal. India regards that it is the prerogative of the Afghan government to decide the pace of talks with the Taliban. But Russia and Iran differ. With the war against ISIS in Syria heading towards a denouement, there is a sense of urgency for Russia and Iran to act which has lead them to make their own suo motu overtures towards the Taliban.

On the second question regarding the ISIS, there is definitely a divergence. Russia sees ISIS in Afghanistan from the prism of its involvement in the ongoing Syrian war.  While the Russian government has chosen to support the Shia dominated Bashar al-Assad government, this move is seen to be extremely unpopular in the eyes of the Sunni Russian Muslims.

Russia’s 20 million-strong Muslim minority has become a major recruitment centre for the ISIS. Russian Muslims have joined the ISIS in Syria and there have been reports indicating that the Russian authorities even encouraged some to go to Syria way back in 2011, with the hope that these ‘trouble-makers’ would never return. Today, there are an estimated 3,000 to 5,000 Russian citizens with the ISIS, putting it far ahead of other European countries. Another 2,000 are Russian-speaking, making Russian the second most common language in the ISIS, after Arabic.

This strategy of wishing away its problems seems to have failed, though. In October 2015, Putin’s chief of staff, Sergei Ivanov, acknowledged that many of the Russians who fought for ISIS have “returned home, presenting a direct threat.” This fear was also articulated by Putin in his speech at the UN General Assembly last September. Two months later, Prime Minister Dmitry Medvedev revealed that “many thousands of Russian citizens and individuals from other post-Soviet republics are fighting in Syria. These completely brainwashed people return home as professional murderers and terrorists. And we don’t want them to stage something similar in Russia after their Syrian stints expire.”

Now, this is where Afghanistan comes into the equation. Russia fears that these Russian-speaking ISIS members will set base in Afghanistan, particularly in the north, along the border with Tajikistan and Uzbekistan. It is also feared that the Islamic Movement of Uzbekistan, which has much in common with the Russian Muslims in ISIS and is already present on Afghan soil, could gravitate towards ISIS and help them secure a foothold. Russia crucially sees any organisation under the ISIS flag as a global threat. Hence, its endeavour to portray the Taliban – a  local, Afghanistan-based movement in Kabulov’s words – as a lesser threat.

Iran’s fears are somewhat similar. It is concerned that an influx of Sunni ISIS militants from Iraq and Syria will pose problems not only for the large Shia minority in Afghanistan but also for its own security. Another problem on its eastern borders would only add to its insecurities. And hence, Iran sees the ISIS as the irreconcilable enemy and Taliban as a secondary threat.

India sees the situation differently, and for good reasons. The Indian perception is based on an understanding that the ISIS in Afghanistan or Wilayat Khorasan is merely made up of rump factions of the Pakistani Taliban, the Afghan Taliban and assorted drug and crime syndicates, all with a markedly anti-Pakistan orientation and with no global aspirations. Moreover, India is far more comfortably placed than Russia or Iran in this regard because of the buffer that is provided, paradoxically by Pakistan.

One view in India is that a singular focus on ISIS in Afghanistan will derail the fight against Taliban which has now killed over 6,000 Afghan soldiers and over 30,000 civilians in 2016 alone. Another reason for the Indian scepticism is that the focus on ISIS would bail out Pakistan, which today is internationally questioned for abetting terrorism. A ‘global’ threat would be used by Pakistan to create a new narrative, a new set of friends and to secure more funding. It would then be a sense of deja vu for India, with the ISI making overtures to elements within this group, providing sanctuaries in return for assurances that they would not be targeted and then manoeuvring to bring Kashmir into the equation. 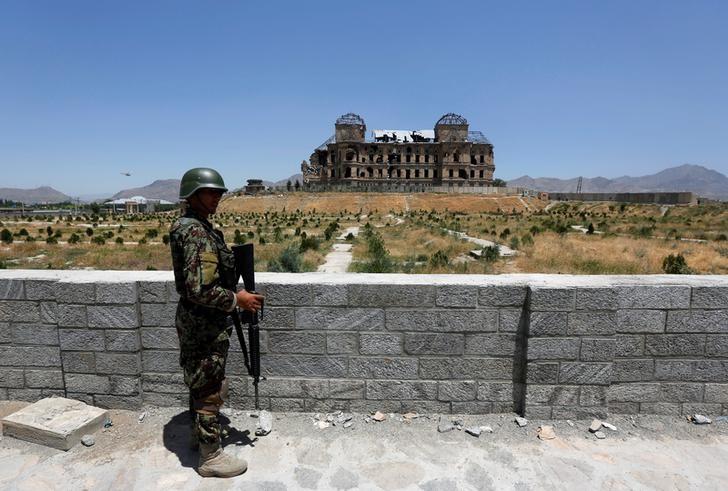 An Afghan National Army soldier stands guard after the inauguration of the reconstruction project to restore the ruins of historic Darul Aman palace, in Kabul, Afghanistan May 30, 2016. Credit: Reuters/Omar Sobhani

Where does this leave India?

With Russia and Iran moving towards an overly anti-ISIS focus in Afghanistan, India is broadly left with three options.

One, continue to back the Afghan National Unity Government’s (NUG) peace efforts and anti-terrorism resistance. This would mean urgent and sustained collaboration with the US under the Afghanistan-India-US trilateral to strengthen the Afghan National Defence and Security Forces and rebuild the Afghan economy.

Two, become a part of Russia and Iran’s efforts in talking to the Taliban. As a part of one such effort, Russia, China and Pakistan are meeting in Moscow on December 27 to discuss the ISIS threat in Afghanistan, crucially without any representation from the NUG. Future meetings of this working group are expected to involve Iran as well.

Three, open direct channels with elements in the Afghan Taliban that are not under Pakistan’s influence.

The first option is highly dependent on the NUG’s own successes. It has been a disappointment thus far – mired in allegations of misgovernance, corruption and disunity. An Asia Foundation survey indicated that 66% of the Afghan population is now pessimistic about the direction the country is heading in, with insecurity indicated as the major factor. This strategy is also dependent on how the Donald Trump administration views Afghanistan. If the US were to reduce focus on Afghanistan, India would find supporting this option on its own untenable.

The second and third options would mean that India will have to look beyond the NUG. Apart from establishing contacts with sections within the Taliban, it would mean reviving contacts with provincial leaders, an enterprise which may lead to problems with the NUG.

The three options are not mutually exclusive. For the moment, India would do well to keep abreast of developments in both camps – the Russia, Iran overtures to the Taliban and the Trump administration’s future plans for Afghanistan. There are dangers, no matter what, in both sets. The Russia, Iran initiative in talking to the Taliban would, inevitably, mean giving Pakistan a larger than merited role shaping the future of the region.

The future of the US in Afghanistan is also uncertain. Afghanistan has been a bad experience for the Americans and they too may choose to view the Taliban menace as a localised insurgency and not one which is a global terrorist threat. If it feels that the US is seeking an exit, Pakistan can hasten it by sacrificing the Haqqani network at an appropriate time, thereby making a re-entry into the good books of the US.

There are no easy choices in the Afghanistan war. Unless the NUG, or the government succeeding it, backed by well-wishing international actors, can regain control of important districts in Afghanistan, other countries are likely to take the cue from Russia and Iran. It will effectively lead to a return of the nineties – only the aftershocks will travel further this time around.

Anand Arni and Pranay Kotasthane are with the geostrategy programme at the Takshashila Institution, a centre for research and education in public policy.