The countries released a statement on maritime cooperation after Modi and Widodo's talks – a crucial moment in India-Indonesia bilateral relations. 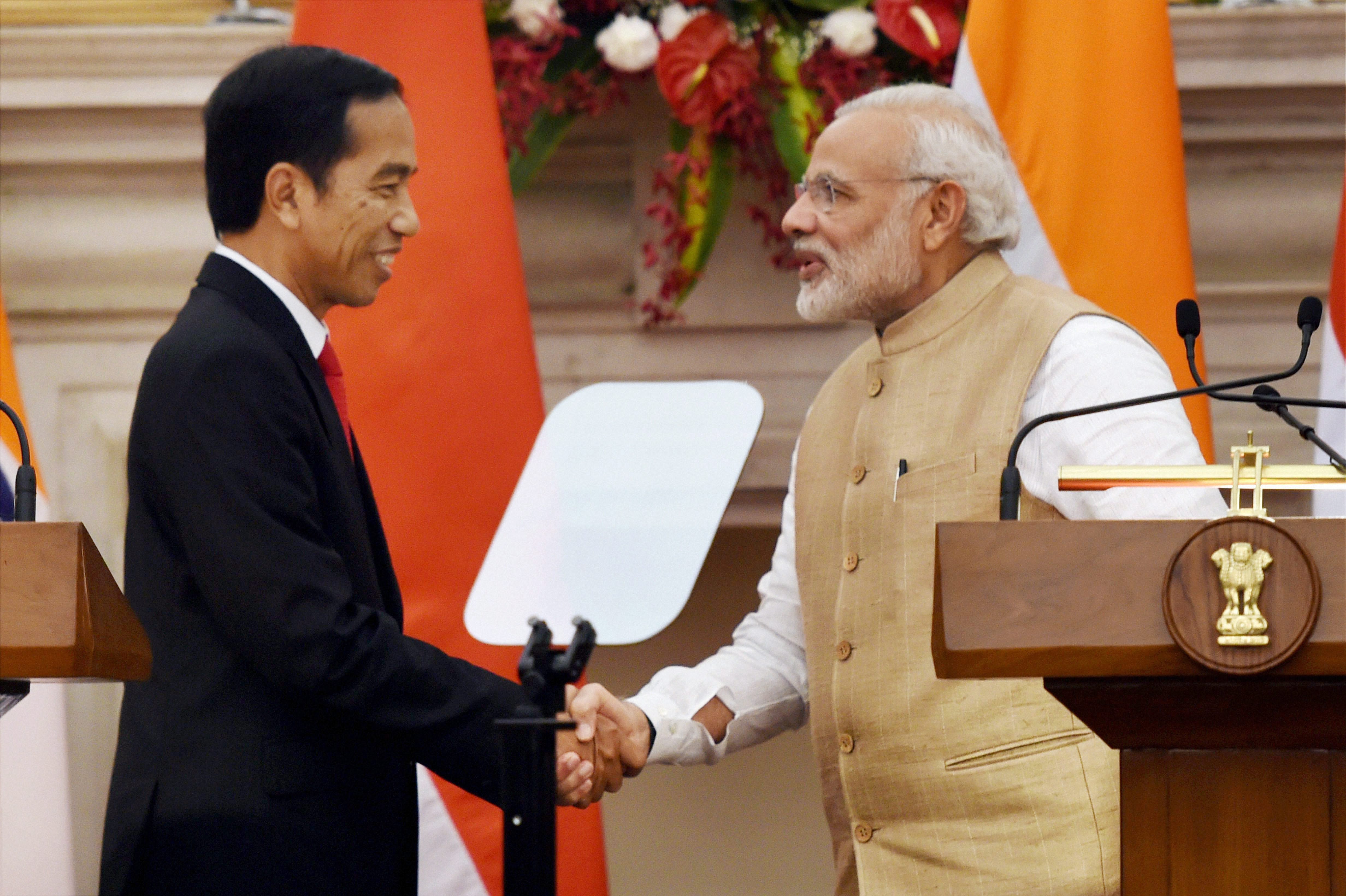 New Delhi: After talks between Indonesian President Joko Widodo and Prime Minister Narendra Modi on Monday, both the Asian democracies expressed common interest in maritime security and primacy of the UN Convention on Law of the Seas (UNCLOS) to resolve maritime disputes. “Illegal fishing” is also an “emerging threat” in the region, the countries noted.

This is Widodo’s first visit to India after he took office.

India and Indonesia released two statements after the talks on Monday. Recognising the preeminence of the maritime domain in the relationship, both countries released a separate statement only dealing with maritime cooperation in addition to a joint statement – a crucial moment in bilateral relations for both countries who are like bookends on both sides of the Indo-Pacific region.

“Both leaders affirmed their deep respect for each other’s contribution to promoting peace, stability and development in the Indian and Pacific Oceans and beyond,” it said.

They also acknowledged that two Asian giants “share common interests in ensuring maritime security and the safety of sea lines of communication”.

“Both Leaders affirmed the need to combat, prevent, deter and eliminate illegal, unregulated, and unreported (IUU) fishing. Both Leaders recognized transnational organized fisheries crime as one of the emerging crimes, which has become an ever-growing threat to the world.”

Indonesia has had a strained relationship with China over the issue of alleged illegal fishing by Chinese boats in waters near the gas-rich Natuna islands. In August, Indonesia had sunk over 60 foreign boats, which included some Chinese vessels. Earlier this year, there had been some exchange of words with Beijing over two separate incidents: the detention of a Chinese vessel and a collision involving a Chinese coast guard ship.

Indonesia is not one of the parties involved in the South China Sea dispute, but it has been increasingly taking tougher stance on its maritime dispute with China.

On South China Sea issue, Indonesia has remained ‘neutral’ within ASEAN, with members divided on how to deal with China’s aggressive claims on Spratlys and Paracel islands.

The India-Indonesian bilateral document implicitly refers to the South China Sea with its mention of UNCLOS, but with no direct mention of the maritime dispute. According to the statement on maritime cooperation:

“Both leaders committed to maintaining a maritime legal order based on the principles of international law, as reflected notably in the United Nations Convention on the Law of the Sea (UNCLOS)

Both leaders recognized that India and Indonesia share common interests in ensuring maritime security and the safety of sea lines of communication. Both leaders recognized the importance of freedom of navigation and overflight on the high seas, unimpeded lawful commerce, as well as resolving maritime disputes by peaceful means, in accordance with universally recognised principles of international law including the UNCLOS.”

The joint statement includes a more explicit reference, which also indirectly refers to the tribunal order.

“Regarding the South China Sea, the two sides stressed the importance of resolving disputes by peaceful means, in accordance with universally recognized principles of international law including the UNCLOS.”

There is no direct mention of the arbitral tribunal order, but that is not surprising as both India and Indonesia have use rather placatory language to respond to the July judgement. India took note of the judgement, but didn’t ask for its implementation. Indonesia didn’t even refer to the order and only said that all parties should respect UNCLOS.

However, Indian officials pointed out that the Natuna islands is the only black spot in an “excellent relationship” between the Widodo administration and Beijing. In fact, Widodo has already visited China thrice since he took office in October 2014.

“They (Indonesia) have been trying to change the views of the South China Sea issue, and generally the situation in the region, but he (Widodo) is not a China-baiter,” said a senior official.

At the same time, Widodo has doubled down on the need to strengthen Indonesia’s defence forces, which is also in line with India also projecting its interests in Asia-Pacific in the shadows of a looming China.

Modi said that both them had agreed to “prioritize defence and security cooperation”.

In early part of 2017, defence ministers and officials will convene as per institutionalised mechanisms to review and upgrade the current defence cooperation agreement which expires this month.

This will be upgraded to a more “substantive” defence cooperation pact. “The new agreement will cover everything from joint exercises including among special forces, joint production and sale of equipment and technology,” said an official.

The first six months of the new year will also see the assembling of the Joint Ministerial Commission, Biennial Trade Ministers Forum and the Energy Forum.

For the Indonesians, the main purpose of the India trip has been to improve the economic aspect of the relationship.

In his press statement, Widodo, who is also accompanied by a 22-member strong business delegation, stressed solely on improving investment and trade with India.

India is already a major investor in Indonesia, with investments worth around $15 billion. “But much of it is routed through Singapore that it doesn’t show up as being from Indian sources. Bilateral trade – if you take out Singapore which is an entry point – is the biggest in ASEAN,” said a senior Indian official.

An Indonesia-India CEO’s forum was held on Monday, with the report slated to be handed over to Widodo on the last day of his India sojourn.

In toto, three agreements were signed, which included two Memorandums of Understanding on cooperation in youth affairs and sports, and trade standardisation. The third document signed in front of the two leaders was the statement on maritime cooperation.

Sources asserted that the theme of the visit was to take stock and propel the relationship forward, rather than sign more agreements.

“Over the last ten years, there have been many visits and many agreements signed. Now we want to take stock and see what we want to do incrementally there instead of doing more and more agreements,” said an official

With Indonesia and India both buffeted by radical forces, officials said that both leaders talked about the importance of democracy and pluralism “emanating from their common heritage of Hinduism, Buddhism and Islam”.

“In a region torn by radicalism and extremism, both countries recognised the important role that they can play in this regard,” said sources.

The joint statement notes that both leaders “condemned terrorism in all its forms and manifestations in the strongest terms, emphasising “zero tolerance for acts of terror”.

“They noted with great concern the growing menace of terrorism and violent extremism and its universal reach. They called upon all countries to implement the UNSC Resolution 1267 and other relevant resolutions designating terrorist entities. They also called upon all countries to work towards eliminating terrorist safe havens and infrastructure, in disrupting terrorist networks and financing channels, and stopping cross-border terrorism. They underlined the need for all countries to deal with trans-national terrorism emanating from their territory by effective criminal justice response. In that regard, the two Leaders called for enhanced cooperation including through greater exchange of information and intelligence between the two sides.”

This paragraph will certainly bring India and Indonesia on the same page, with New Delhi satisfied to have made a subtle reference to Islamabad with the mention of “trans-national terrorism” and implementation of the UNSC Resolution 1267.