No Bucks for Bang? India Has Netted Only $1 Million in FDI For Defence Sector

While offsets from the Rafale and other deals will start coming in over the next year, other FDI proposals have been rejected while Parrikar’s key ‘strategic partner’ document is still missing.

While offsets from the Rafale and other deals will start coming in over the next year, other FDI proposals have been rejected while Parrikar’s key ‘strategic partner’ document is still missing. 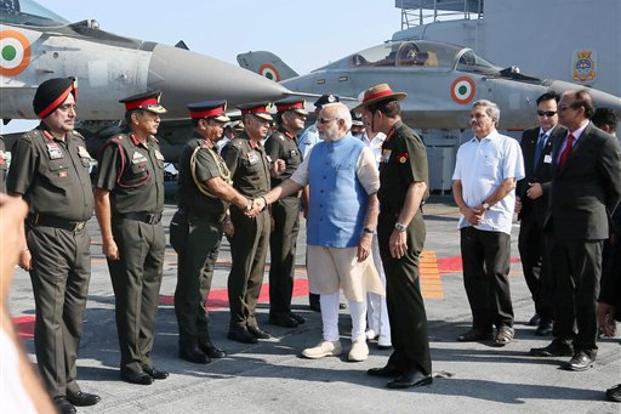 Latest figures on FDI inflows in defence, an industry that Modi has promised will tap into foreign investment to boost local manufacturing and wean India off its costly importing of arms and weapons, were presented in the Lok Sabha last week.

From January 2013 to September 2016, a total $9.95 lakh ($995,000) was received from three countries: the UK, France and Israel. The data doesn’t disclose which proposals this investment came from, although the most came from the UK.

In the current year, however, Parrikar said, “till September 2016, no FDI inflow has been received”.

Foreign investment and, perhaps more crucially, transfer of technology have been two major themes the Modi government has grappled with over the last two years as India looks to reduce its dependence on foreign weapons contractors.

Over the last two years, the Centre has tweaked foreign investment rules for the defence sector a number of times; first by increasing the investment cap under the automatic approval route from 26% to 49% in late 2014 and then by changing the conditions under which a 100% FDI proposal would be approved. Hundred percent FDI proposals were earlier allowed under the government approval route if they gave India and Indian companies access to “state-of-art” technology.

This was changed early this year to “modern technology”. While this change in terminology has been criticised by observers within the industry as a minor change, other experts believe this will allow the defence ministry’s DAC (defence acquisition council) greater leeway in the coming years.

Just to put the FDI defence numbers in perspective – India attracted on the whole nearly $45 billion in FDI in 2015; an increase of around 28% when compared to 2014. In 2016, while the final number hasn’t been tallied yet, total FDI inflows are expected to cross $60 billion.

Analysts and industry observers, however, believe that the next few years will start yielding more foreign investment in the defence sector. Observers are more optimistic this year, in part, because of Parrikar’s new defence procurement policy which, among many other things, has changed the way ‘offsets’ will work.

Offsets, a curious part of the way foreign investment is brought into the defence sector, is very much like putting down some of ones own money in order to bring money in from outside partners. Award a particular defence contract to one company and then demand that a percentage of the contract’s value be invested by that company in India’s local defence ecosystem.

“The 2016 policy allows the defence ministry and more importantly the armed forces to specify what exactly they want as offsets for a particular deal. This will allow the local ecosystem to be groomed more specifically, rather than giving general broad offsets that can never be truly achieved,” said Anand Bhatia, a defence analyst.

What offsets will start coming in from the next year?

The much-delayed Rs 60,000 crore Rafale deal is one. The agreement was finally signed this year, with a satisfying 50% offset clause (France initially wanted 30%). While offsets will be split across other defence companies involved the deal (Thales, MDBA and Saffra) and some money may be earmarked for India’s stalled combat engine project, the first visible sign of investment was when Reliance Defence announced a joint venture with Dassault Reliance Aerospace Pvt Ltd; although the structure and composition of the new company wasn’t publicly disclosed.

Another clear channel by which foreign investment will flow is in the Rs 5,000 crore deal for 145 M777 Howitzer guns that India signed with the US in October (officially formalised in December). Offsets for the deal (around $200 million) will be pursued independently by BAE Systems, which manufacturers the gun.

On the other hand, there were number of defence deals that didn’t work out and other 100% FDI proposals that were rejected for varying reasons.

A $1.3 billion-deal and five-year-long attempt by India to acquire twelve US-2i ShinMaywa amphibious search-and-rescue (SAR) aircraft is still struggling. There are a number of straggling issues with the deal, although back in 2014 UPA government officials “had in principle agreed to purchase 12-15 aircraft (priced around $110-115 million each)” as long as it came along with co-production and technology transfer. While there are some signs that problems are being resolved, it is unlikely to happen in the short-term.

While the FDI proposal’s value is modest, as The Wire reported, it was the first 100% FDI proposal received by India. A few months after it was received, DCNS’ bid  hit a “modern technology” roadblock with the defence ministry. The Scorpene submarine leaks, which embarrassed India, proved to be the final nail in the coffin and India’s first 100% FDI proposal was swiftly rejected.

These failures are not merely limited to FDI proposals. The general bureaucratic and often biased acquisition process by India’s armed forces, when it comes to acquiring crucial weaponry, has not been fixed by the Modi government. For example, a six-year-long process to acquire over close-quarter battle carbines (needed if India were to ever engage Pakistan in conventional warfare) was scrapped earlier this year over “alleged deviations from established process”. As one senior industry observer put it: “Forget futuristic fifth-generation aircraft, basic equipment needed for India’s armed forces is still being held up”.

Perhaps the most-trumpeted part of the Modi government’s new defence procurement policy was its “strategic partner” portion. Who or what are strategic partners? They are, essentially, a group of two-to-three private companies that would be identified as valuable manufacturing/design/development partners for specific defence platforms such as artillery, combat vehicles, aircraft, submarines etc.

So for India’s various aircraft requirements, two or three Indian vendors would be designated as strategic partners and supply whatever was required.

A strategic partner policy, defence ministry officials say, would allow certain companies to be certain of a long product-roadmap. This, in turn, would allow them to invest in domestic manufacturing and technology capabilities; a long-standing concern of India’s defence companies such as the Tatas, the Mahindras and Larsen & Toubro.

And yet, the notion of a strategic partner has been extremely contentious due to the obvious potential for corruption and bias. That’s why,while the 2016 defence procurement policy was released earlier this year, the strategic partner policy chapter was left blank. As of December 30, it’s still missing. Since then, two different military panels have analysed the issue and while it was widely reported in October by defence journalists that it would be out soon, it still hasn’t been made public.

Multiple sources tell The Wire that the defence ministry was worried that legal challenges will be mounted once the various strategic partners are announced, which is why it is being vetted before being handed off to the finance ministry for clearance.

The lack of a specific strategic partner policy has meant that the way the defence ministry now approaches big-ticket projects is rather curious. On one hand, there’s no official strategic partner policy, and yet on the other, the spirit of finding a “strategic partner”, in trying to identify one or two vendors to develop infrastructure and become crucial vendors for the next 10-15 years, is now being followed.

Consider the recent RFI (request for information) or manufacturing ammunition in India. As journalist and analyst Ajai Shukla notes, the ammunition that will be manufactured will be procured under a long ten-year-term contract. And the contract’s corporate requirements and technical specifications clearly “weigh in favour of large private firms” that could forge global partnerships even though smaller more specialised firms could potentially contribute.

Smaller companies, naturally, say this is highly discriminatory especially since there is no official policy on strategic partners just yet.

This tension, the lack of an official strategic partner policy while defence ministry officials still seek to implement its vision, will influence the way future contracts are handed out in 2017.

“One positive way of looking at it is instead of appointing strategic partners and handing them all contracts, which has its own problems, you work from the ground up and identify strategic partners,” Rahul Gangal, partner at Roland-Berger, told The Wire.

The arrival of Reliance

2016 in defence, and the years to come ahead, will likely see the role of Reliance Defence becoming larger and more significant. After officially acquiring Pipavav Defence in March 2016, Anil Ambani’s Reliance has quickly become a player to watch out for. It certainly surprised some defence analysts this year when it managed to snag the major portion of offsets stemming from the Rafale deal.

It’s presence is also being felt in other ways. Take for instance the Rs 50,000 crore future infantry combat vehicle (FICV) project: It was recently fast-tracked, with Tata Motors and L&T being the two likely players who will produce prototypes for the Indian government.

Reliance Defence and the Mahindras have raised objections with defence ministry officials by pointing out the Tata Motors CEO (one Guenter Butschek) is a “foreign national”  and thus Tata Motors is should be disqualified from bidding for the FICV initiative. Tata Motors on its end has rejected such concerns. Nonetheless, Reliance’s concerns show that it’s willing to compete on at all levels. In fact, defence analysts point out as Tata Motors finishes its restructuring process, its new defence vertical will likely be headed by veteran defence executive Vernon Noronha.

As one senior industry official, who declined to be identified, put it: “Reliance being Reliance simply punches above its weight”. “The company itself is small, Ambani is selling off much to fund it. It doesn’t have a lot of experience or expertise, but still makes its competitiveness known.”

Indeed, as the financial stakes increase, as India turns its defence focus inward, this type of cut-throat competitiveness will be on the rise. The industry hopes that this will not only reduce India’s import bill, but also the corrupt, bureaucratic and biased nature of the defence sector itself.