From the start, China has been on public relations blitzkrieg in the Doklam stand-off with daily statements from the foreign and defence ministries.

Li Ya, political counsellor at the Chinese embassy in India. Credit: YouTube

New Delhi: In an unprecedented resort to  public diplomacy, the Chinese embassy in New Delhi released a video by its political counsellor contesting the official Indian statement on the Himalayan stand-off at Doklam near the Bhutan border.

In his monologue in English, Li Ya claims credibility in offering China’s view given his “first-hand knowledge” of the border areas. “Some Indian friends are deeply worried at face-off between Chinese and Indian border troops at Doklam. I have been to China-India and China-Bhutan border areas many times and have first-hand knowledge about Doklam in that sense, I would like to share my perception on the current situation in Doklam,” Li begins.

During previous border transgressions, Indian officials had sometimes referred to public sentiment within India in order to persuade China to move its troops back to previous lines.

It is, therefore, highly unusual and significant that Chinese diplomacy is directly addressing the Indian audience. Further, Chinese embassy officials in India, except for the ambassador and press officer, are rarely identified and keep a low profile.

The video was released just a couple of hours after the Chinese embassy  issued a press release on the Kailash Mansarovar Yatra, citing the “great efforts” made by China previously to facilitate the pilgrimage, which it acknowledged was an “important part of China-India people-to-people and cultural exchanges”.

China had stopped the pilgrimage from going through the Nathu-La pass on June 20, leaving three batches of pilgrims waiting for Beijing to open the door.

Also read: Six Expert Views on How India Should Look at the Latest Border Stand-Off With China

“China consistently respects the Indian people’s religious sentiments and attaches importance to Indian Yatra to Kailash and Manasrovar in Xizang. Up to now, the official yatra through Lipuleku Pass and non-official yatra through Lhasa and Purang are still on the rails,” said Chinese embassy spokesperson Xie Liyan.

Xie added that China was “willing to discuss the possibility of alternative arrangements through other routes for Indian official yatris who had planned to visit Kailash and Manasrovar via Nathula Pass”.

The combination of the press release and the video seems to indicate that China, like India, is not interested in letting the situation get out of control.

From the beginning, China has been on a public relations blitzkrieg in the Doklam stand-off with daily statements from the foreign ministry and complementary remarks from the Ministry of National Defense. Even on Thursday, the Chinese foreign ministry spokesperson took seven questions related to the stand-off in his daily briefing.

In contrast, the first statement from Bhutan was on June 29, followed by a comment from the Indian external affairs ministry the next day. When foreign secretary S. Jaishankar was asked a question on China during a press briefing on the sidelines of Prime Minister Narendra Modi’s visit to Israel, he stated that all questions had to be related only to the Israeli trip.

Bhutan claimed that the Chinese army started to construct a motorable road on June 16 from Dokola in the Doklam area towards the Bhutan army camp in Zompelri. The Royal Bhutanese army confronted them, but they were pushed back. Thimpu lodged a protest with China and asked it to restore the status-quo of June 16.

According to the Indian statement, Indian soldiers “in coordination” with the Bhutanese government climbed down from Doko La and urged the Chinese “from changing the status-quo”.

India had also said that there were “serious security implications,” as the Chinese move seemed to “unilaterally” move the tri-junction point further south. 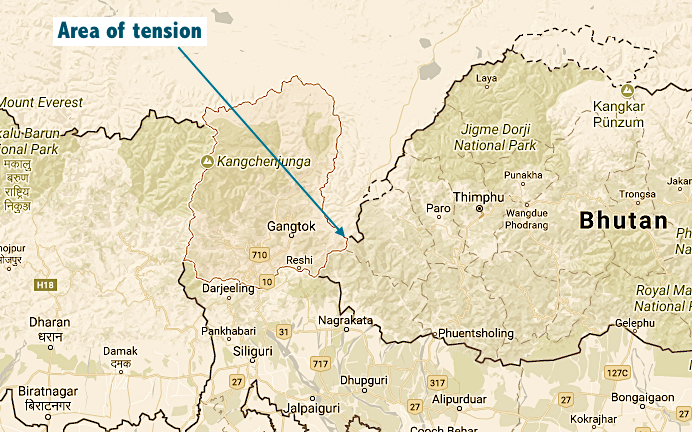 Since China claims Doklam, the movement of Indian troops into that region has been described as a violation of the 1890 Anglo-Chinese convention on Sikkim and Tibet. Beijing asserts that India had endorsed this treaty, citing a letter of 1960. However, India asserts that only the alignment of the border at the watershed line had been agreed. In turn, India accused China of violating the written understanding on involving third countries in resolving the tri-junction issues, decided by the special representatives in 2012.

“Based on my knowledge and work on the China-India and China-Bhutan border affairs in the past decade, I would like to say that India’s position are groundless,” Li Yan says in the YouTube video.

Reprising previous talking points, he claims that China’s territorial sovereignty has been “undermined” by the crossing of Indian border troops from Sikkim on June 18.

Even as the tone of the Chinese embassy’s video was relatively even, the state-run tabloid Global Times continued to publish provocative editorials.

“Unfair treaties between India and Bhutan that severely violate the will of the Bhutanese people should be abolished. China needs to put more efforts into establishing diplomatic ties with Bhutan at an earlier date as well,” it said.

China had recognised India’s sovereignty over Sikkim in 2003, which the editorial urged to be reconsidered.

“Although China recognized India’s annexation of Sikkim in 2003, it can readjust its stance on the matter. There are those in Sikkim that cherish its history as a separate state, and they are sensitive to how the outside world views the Sikkim issue. As long as there are voices in Chinese society supporting Sikkim’s independence, the voices will spread and fuel pro-independence appeals in Sikkim,” said Global Times.

It claimed that China had previously been wary of India’s “Dalai Lama card,” adding that “this card is already overplayed and will exert no additional effect on the Tibet question”.

“But if Beijing adjusts its stance on India-sensitive issues, it could be a powerful card to deal with New Delhi,” asserted Global Times. In its editorial, the Chinese tabloid had warned India that China could do a repeat of the 1962 war defeat against India.

Though Modi will be meeting Chinese President Xi Jinping in Hamburg on Friday as part of the G20 summit, a bilateral meeting between the two leaders has been ruled out by the Chinese side, which says “the atmosphere is not right”.

The MEA spokesperson responded that Modi’s “pre-planned bilateral meetings” on the sidelines were with Argentina, Canada, Italy, Japan, Mexico, South Korea, UK and Vietnam. “In addition, he will also participate in the BRICS leaders’ meeting. There is no change in the prime minister’s schedule,” he said.

Modi and Xi last held a structured bilateral meeting in June in Kazakhstan during the Shanghai Cooperation Organisation summit. It took place a couple of days after Chinese soldiers destroyed an old bunker at Doko La, therefore the border issue had come up in the talks. The Indian side seemed to have come back with the impression that both countries were on the same page regarding the border. This was obviously proved wrong. Sources had indicated last week that a structured bilateral meeting would have been difficult to the tight schedule of the G20 summit, but had not ruled out a quick pull-aside meeting.