New Delhi hopes that the new line of credit for $500 million for defence procurement will wean Dhaka off Chinese military purchases. 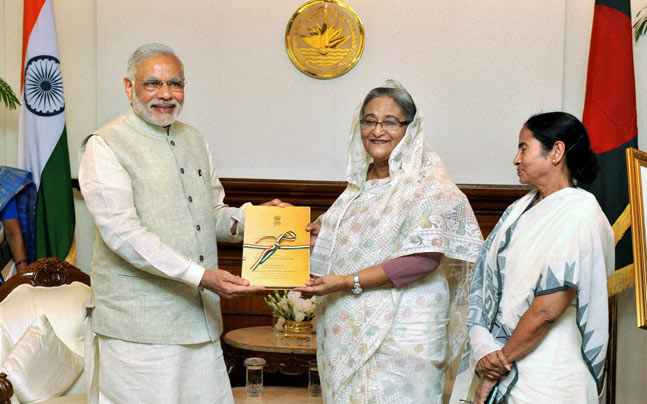 New Delhi: Even as India and Bangladesh failed to reach an agreement on sharing river water, on Saturday Prime Minister Narendra Modi assured visiting Bangladesh premier Sheikh Hasina – in the presence of West Bengal chief minister Mamata Banerjee – that only his government could come up with an “early solution” to the Teesta river issue.

India has offered two lines of credit – $4.5 billion for development assistance and $500 million for defence-related procurement – to Bangladesh. The two leaders signed 22 agreements and witnessed the exchange of four pacts – cooperation in judicial sector, lines of credit, outer space and passenger and cruise services.

Besides this, they released a Hindi translation of the unfinished autobiography of Sheikh Mujibur Rahman and also named a road after Bangladesh’s founding father in the middle of Lutyens’ Delhi. Banerjee then joined them to launch three new transport links from West Bengal to Bangladesh.

Modi raised the Teesta issue himself in his statement to the media.

“Along with our shared land boundaries are our shared rivers. They sustain our people and their livelihood. The one that has attracted greatest attention is Teesta. This is important for India, Bangladesh and India-Bangladesh relations,” he said.

The Indian prime minster pointedly noted that Banerjee was also present on the occasion. “I am very happy that chief minister of West Bengal is my honoured guest today. I know that her feelings for Bangladesh are as warm as my own,” said Modi. Banerjee’s dissenting opinion on the Teesta pact has been the reason that there has been no agreement between the two countries. She famously made a U-turn on her stance on the eve of then Prime Minister Manmohan Singh’s visit to Dhaka in 2011.

“I assure you and the people of Bangladesh of our commitment and continued efforts. I firmly believe that it is only my government and excellent, Sheikh Hasina your government that can and will find an early solution to Teesta water sharing,” said Modi.

In her statement, Hasina added that not only Teesta, but the Ganga barrage project was also discussed during the formal talks.

“We discussed the issues of water resources management including the sharing of water of common rivers, including Teesta, the Padma-Ganga barrage project and basin management of the common rivers. I sincerely believe that we will be able to get India’s support to resolve these issues expeditiously,” she said.

In the run-up to the visit, both Indian and Bangladeshi officials had admitted that any progress on the Teesta water sharing issue was not possible during this summit. Then, Dhaka tentatively floated the possibility for some positive language on the Ganga barrage project, but this was dismissed by the Indian side. India pointed out that the Ganga barrage project faced the same obstacle as Teesta – that is, the involvement of the West Bengal government.

In the last six year, India has extended lines of credit to Bangladesh during visits from the country’s prime ministers three times – making this credit the biggest soft loan that New Delhi has proposed to any foreign country in this period.

When Hasina visited India in 2010, $1 billion line of credit was the largest that India had ever offered – and also the largest that Bangladesh had gotten from a foreign country at that point.  A part of that – $200 million – was then converted into a grant because Bangladesh was interested in using this amount for constructing the Padma bridge.

As per EXIM bank statistics, of the $862 million line of credit which was signed for in August 2010, around $325.94 million has been disbursed.

Thereafter, India extended $3 billion during Modi’s visit in June 2015. According to Indian officials, Exim Bank has given the green light on the projects suggested by the Bangladesh government under the second line of credit, but funds have yet to be disbursed as no contracts have been signed yet.

India’s third offer for $4.5 billion came after Chinese premier Xi Jinping’s visit to Bangladesh in October 2016, when the Chinese president extended a line of credit of $24 billion.