The Inconvenient Truth About CPN-UML's Success in Nepal

What explains this electoral success of UML, which is often projected as 'xenophobic' and virulently 'anti-Madhesi'? Is it its organisational strength, its ability to mobilise foot soldiers or a combination of these factors? 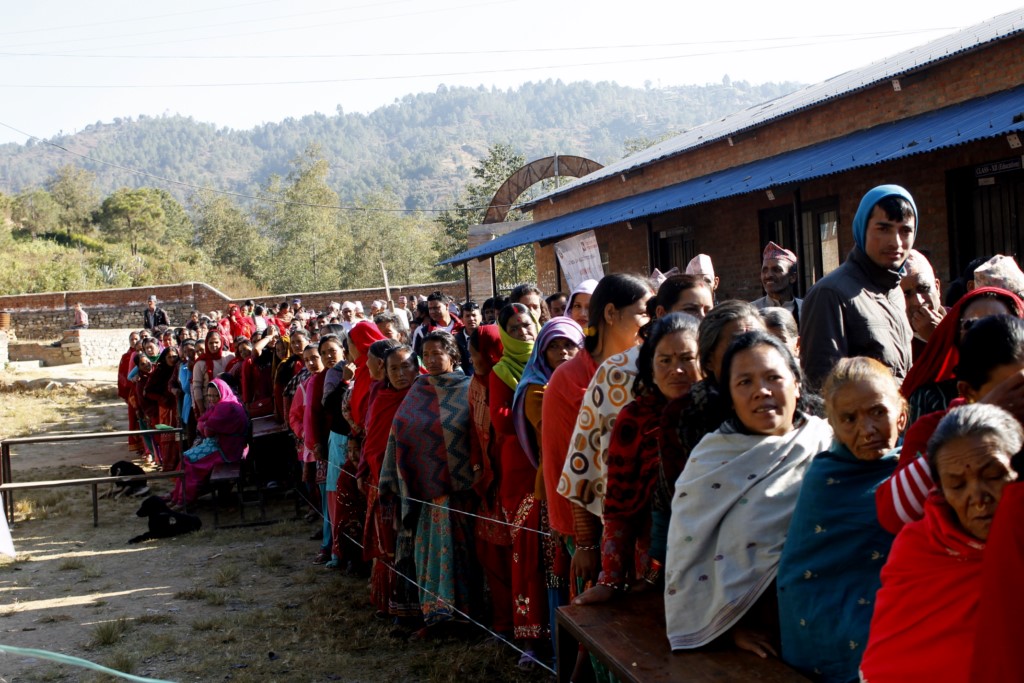 Bagging the most number of seats in the first phase of the local elections on May 14, K.P. Sharma Oli’s Communist Party of Nepal-Unified Marxists Leninists (UML) is poised to be the biggest party at the local level. It is also projected to win most seats in the second round, which took place on June 28. As vote counting for the second phase ends, it is worth noting that even in Tarai-Madhes, the low-lying flatlands bordering India, the UML is running neck and neck with Nepali Congress, currently the biggest parliamentary party. Meanwhile, the small Madhesi parties have mostly been routed.

But what explains this electoral success of UML, which is often projected as ‘xenophobic’ and virulently ‘anti-Madhesi’? As I have written previously, the UML is a strange political animal. Nominally, it is a communist party, but it is these days so closely wedded to free-market economics that no one thinks of it as a serious communist outfit any more. While the party is weak on ideology, it is strong in organisation. Of the three most powerful forces in Nepali politics – Nepali Congress, UML and Communist Party of Nepal (Maoist Centre) – UML is easily the best organised.

It is the most streamlined, mobilises the most number of foot soldiers, is the most tech savvy and, above all, it knows how to mobilise voters. Besides these organisational strengths, there are other reasons for UML’s recent good electoral showing. One is that it is lot more inclusive these days in terms of the candidates it fields. Janjati candidates have been fielded in Janjati-majority constituencies and Madhesi candidates in Madhesi-majority constituencies. But this is just as true of Congress and Maoists these days. So, what other factors explain UML’s success?

Consider the electoral dynamics in Tarai-Madhes. Over 50% of Nepal’s nearly 28 million people live in the 22 Tarai districts abutting India, which is why the Madhesi parties want more electoral constituencies for Tarai-Madhes via timely constitution amendment. But this statistic hides a crucial fact: not all of the inhabitants of Madhes are native Madhesis.

Depending on which estimate you believe, Madhesis comprise anywhere between 19% to 33% of Nepal’s total population (you arrive at the lower end of the spectrum if you exclude Tharus and Muslims, both of whom continue to insist that they are distinct ethnic clusters and separate from other Madhesis). In Madhes, the Madhesis (including Tharus and Muslims) comprise around 65% of the population. So, Madhes is not a monolith. And while UML may not be wildly popular among native Madhesis, it continues to be highly popular among the hill settlers in Tarai-Madhes, a big constituency in itself.

Another factor contributing to UML’s popularity, even among many native Madhesis, is the strong stand Oli took as prime minister during the five months of blockade of the Indo-Nepal border. Unlike Congress and Maoist politicians who minced their words and refrained from directly blaming India, Oli unequivocally put all the blame for the blockade on the southern neighbour, thereby increasing his nationalist credentials. Historically, India-bashing is a foolproof electoral strategy in Nepal. Anecdotal evidence suggests that following the blockade, many Nepalis, even those who were otherwise not interested in politics, became overnight converts and readily embraced Oli and his UML party.

UML is also rather popular among the older generation because of social security programmes like the provision of life-long stipends for the elderly it brought while in government. Arguably, older Madhesis are also more comfortable with the idea of a strong and centralised Nepal (as championed by UML), compared to the younger Madhesis who are more rebellious and want more autonomy for Madhes under the new federal set up (as championed by Madhesi parties). Crucially, the older folks are also more likely to turn up and vote, which in part explains the UML’s electoral success.

Despite this, the UML’s position was a little dicey in the Tarai belt at the time of the blockade, as the Madhesi parties endlessly (and rather successfully) demonised it for obstructing a constitution amendment. Yet, of late, the tide seems to be turning in UML’s favour in Tarai .

The Rastriya Janata Party Nepal (RJPN), the newly created outfit formed with the merger of six small Madhesi parties, had officially boycotted the local elections and even threatened to disrupt them with force. The RJPN was of the view that local elections should be held only after the amendment of the new constitution.

The RJPN was banking on grassroots-level resistance in the Madhesi areas of provinces 1 and 5 in order to foil the second round of local election there. In the event, there was little resistance. Instead, local RJPN leaders started defecting to other parties, including to the UML. To avoid more defections, the RJPN leadership was forced to allow its leaders to contest the second phase as ‘independent’ candidates.

Common Madhesis were confused. Why was the RJPN officially boycotting the election even as its local leaders and cadres were taking part in it? The RJPN also said it did not accept the ‘divisive’ constitution and yet it was taking part in every prime ministerial election under the same constitution.

These confusing messages played into the hands of established forces like the Nepali Congress and the UML, both of which had strong organisational bases in Madhes. This is why some political analysts now believe that even in the Madhesi heartland, Province 2 – which is scheduled to hold the third phase of local election on September 18 – the UML could do unexpectedly well. People seem to trust the devil they know more than the friends they don’t.

In both the first and second phases of the local election, the turnout was around 73%, even in Madhesi areas, which suggests that people there were eager to vote despite the boycott call of the protesting RJPN and the election being held in the middle of the monsoon.

The high turnout, as I have previously argued, is also the result of the unique dynamics of local elections in Nepal. Local elections are about people’s everyday issues like registration of marriages and deaths, access to drinking water and irrigation facilities. Moreover, the new constitution has devolved vast powers to the local bodies, including the right to draft school syllabus in local language, build hospitals and maintain their own police forces and courts.

If the new local level arrangements work as envisioned, it will be a milestone in the long-desired devolution of powers away from Kathmandu. This is why so many people in Nepal are in favour of timely local elections.

Before the first phase of local elections on May 14, local elections had not been held in Nepal for two decades. In the absence of elected local representatives, people suffered greatly, as they had to visit the distant district headquarters even for simple administrative tasks. Local development works also ground to a halt as most development funds from the centre were misappropriated by local functionaries of political parties; as they were not elected, they were not accountable to anyone. People voted for a change of this dispirited status quo.

Looking at Nepali politics only through the prism of Madhesi activists and political parties, as the international community is wont to do, presents an incomplete picture. It is interesting that in the lead up to the second round of voting, people in remote areas in Madhes said they were not all that interested in big things like the redrawing of federal borders, which has been among RJPN’s central demands. They said they were rather dismayed by the ‘divisive’ rhetoric coming out of Kathmandu and by the popular perception of Madhesis as somehow less patriotic than other Nepalis.

Madhesi people feel that Kathmandu still doesn’t understand them properly. But their enthusiastic turnout in the second phase also shows that they firmly believe in the democratic way of settlement of extant political disputes, and that they reject any kind of extreme solutions. Shouldn’t the RJPN and other Madhesi outfits, which claims to represent Madhesis, honour this sentiment?

It will be wonderful if the constitution can be amended and the RJPN can then formally take part in the third phase of local election in Province 2 scheduled for September 18. And every effort should be made to make the constitution more inclusive. But, by the look of things, the people of Province 2 are as eager to vote as the people in the other six of the seven provinces that have already voted, with or without the amendment.

In the end, the UML has been the biggest beneficiary of the political course that the country has been on since the promulgation of the new constitution in September 2015. Perhaps the Madhesi intellectuals and political parties that endlessly demonise the UML should closely study the party’s enduring appeal among millions of Nepalis who faithfully turn up and vote for it, election after election.

Biswas Baral is a Kathmandu-based journalist who mostly writes on Nepal’s foreign policy. He tweets @biswasktm.

Note: Due to a typo, the population of Nepal, which is 28 million, was wrongly given as 2.8 million